On Thursday March 8, footage emerged of a woman riding a horse into a nightclub in Miami. An investigation has been launched by city officials in Miami, claiming that the act itself was a threat to public health and could potentially be deemed as animal cruelty.

Mayor Dan Gelber said at a news conference on Friday:

In the video, a woman in underwear is seen riding a white horse, parading it around the nightclub, before it appears to slip and then fall. As the horse attempts to stand back up, the rider falls from its back. The horse, clearly shaken by the whole affair, continues to meander through the crowd before the video ends.

WATCH: Mokai Lounge in Miami Beach under fire after video surfaced of a horse inside the nightclub pic.twitter.com/C7Saz3q20a

Animal cruelty charges could potentially be issued after the city order says that the footage shows the horse to be scared, concluding that the situation was an "actual threat" to public health and safety.

A petition to revoke the club's licence was set up and pulled in more than 1,000 signatures within hours. The club has since been shut down.

Mr Gelber recalled at the news conference, his first thought upon seeing the video stating "what kind of idiot would do something like this?" 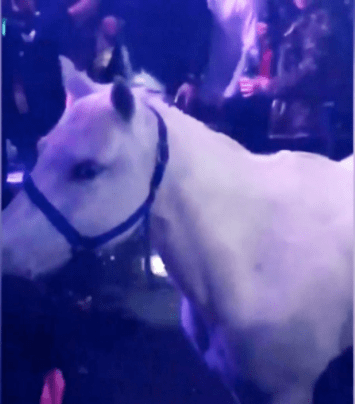 Jimmy L. Morales, the city manager, who was in charge of shutting the club down, said that he was "disgusted and offended that any legitimate businessperson would think this was an appropriate action to take".

While the authorities would not discuss how the animal got inside the club or why it was there in the first place, Melissa Berthier, a spokesperson for the city, said in an email on Saturday that the police had located the horse, and had determined it to be “healthy and safe.”