Almost every single child dreams about having a puppy at some point in his younger years. Even Tiva, this adorable little girl who grew up at Lewa Wildlife Conservancy, an immense sanctuary for wild animals in the North of Kenya, had this dream. 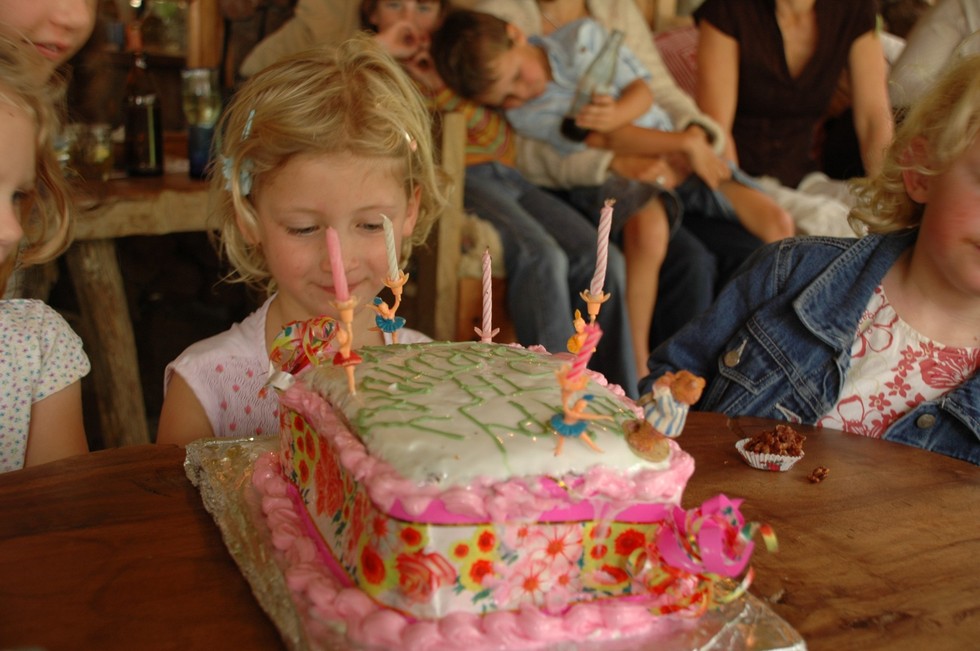 All her life, Tiva has tubbed shoulders with wild animals that children in cities only read about in storybooks, such as leopards, zebras, elephants and rhinos.

The sanctuary is 62000 hectares big and her parents are some of the people working here and trying to protect wild animals that are under threat of extinction. 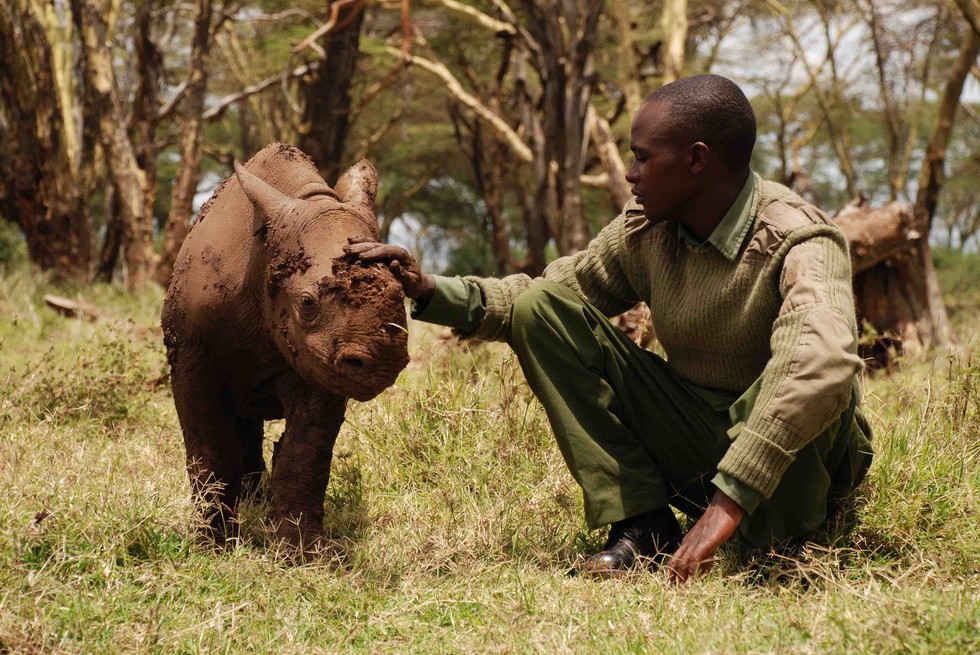 But as it turned out, living in the middle of the animal kingdom wasn't enough for Tiva – all she wanted was a puppy! Even if dogs aren't always an easy presence around lions or elephants… 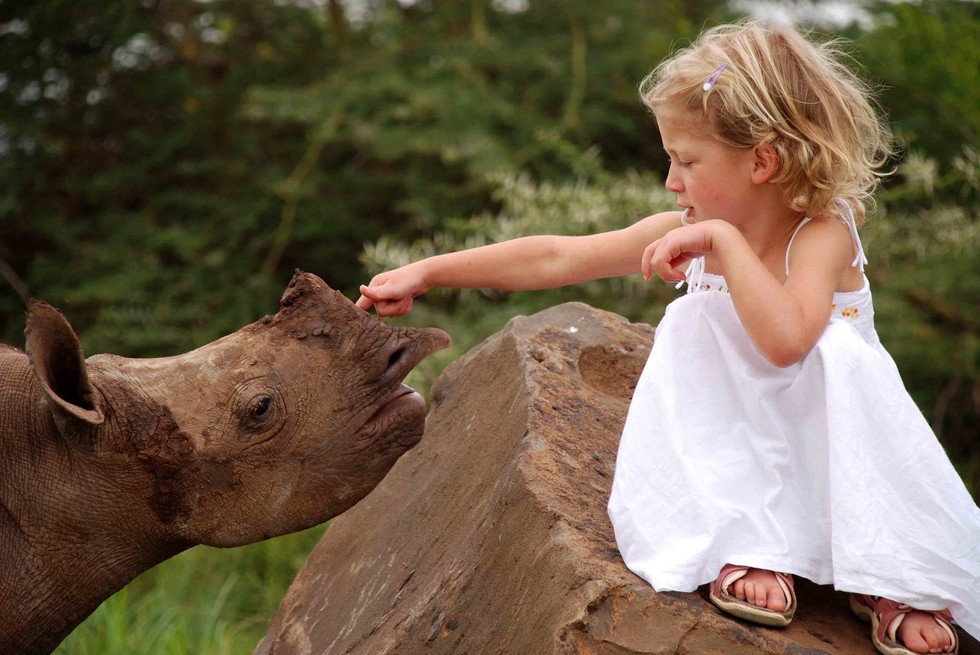 That's when a blind rhinoceros in the sanctuary gave birth to the little Lola. The blind mother sadly got lost in the vast reserve soon after, never to see Lola again.

Lola found herself completely alone and vulnerable to predators. 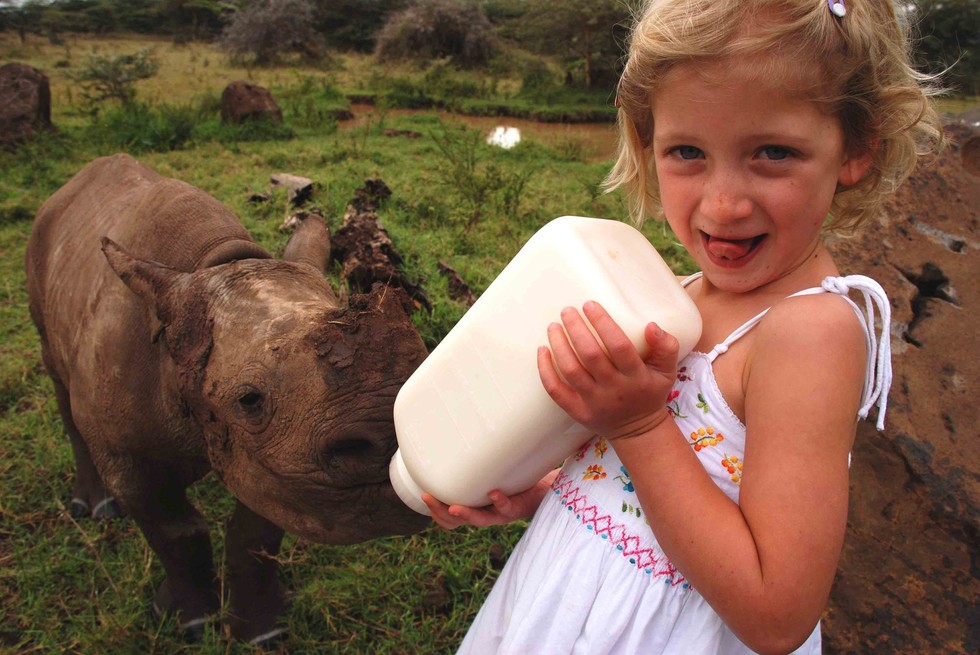 The rangers then decided to transfer Lola to an area closer to Tiva and her family's house, so they they could keep an eye on Lola and take care of her. That's when Tiva met Lola and they became best friends. Tiva didn't get a dog, but she indeed had a pet that will forever have a special place in her heart… 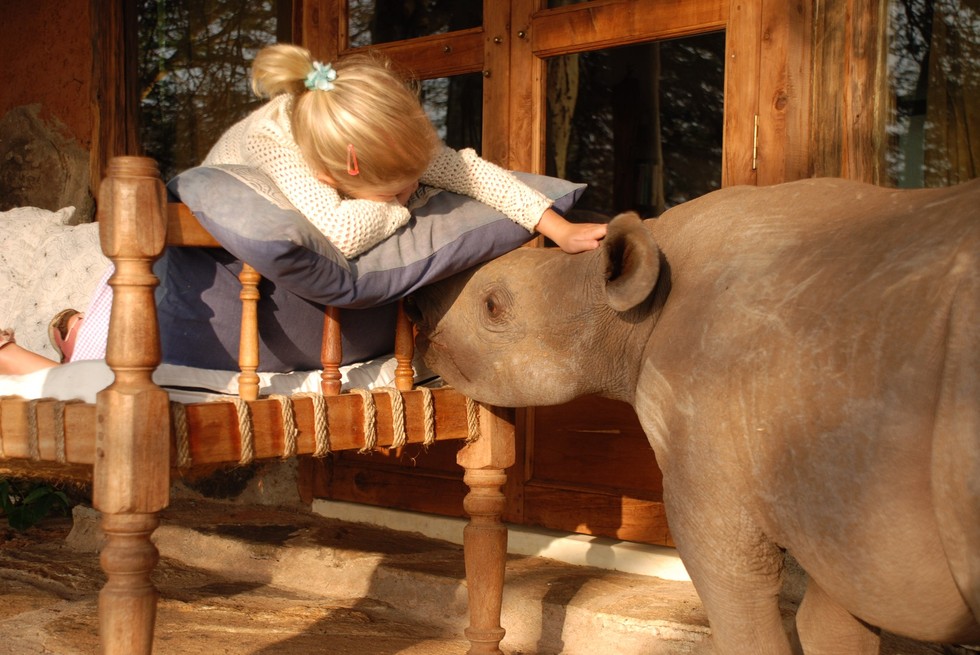 In theory, rhinos are anything but gentle. But Lola became used to Tiva's presence since she was a baby and she has never shown any aggression towards her human.

As hard as it is to imagine, the baby rhino adopted the behaviour of a domestic animal and lives exactly as a cat or dog does! There is no problem for her to be in and out of the house or sharing a meal with the family. 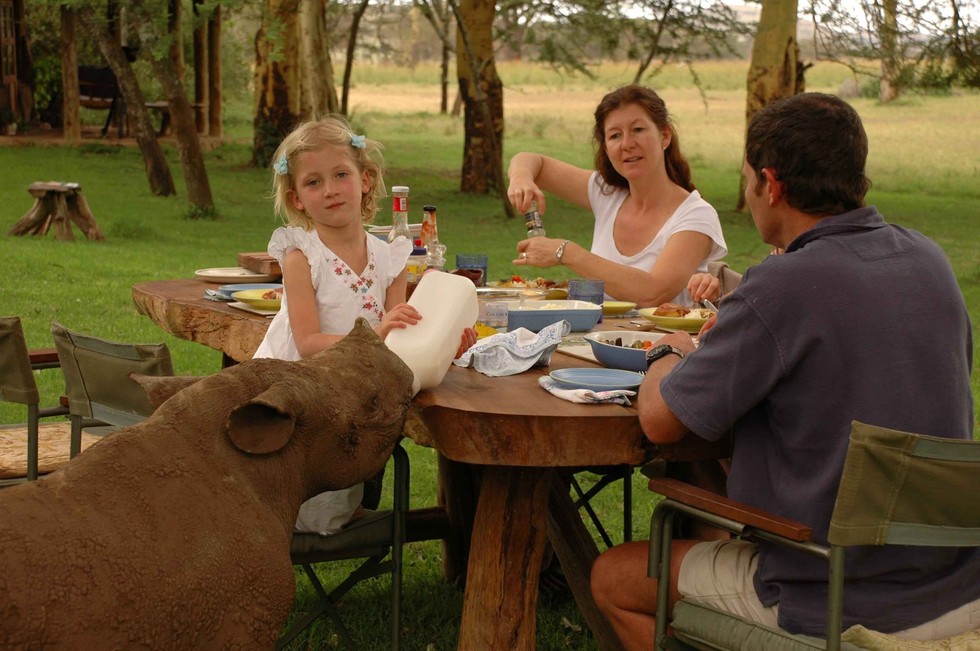 As rhinos' skins are sensitive to the sun, they spend a lot of time bathing themselves to keep cool. It seems that this might be one of Tiva's favourite past times too…
When Lola grew too big to live with Tiva, she was transferred to Ol Pejeta Conservancy, a neighbouring reserve. Although the two friends can't spend their days together anymore, their friendship will never die in their hearts. 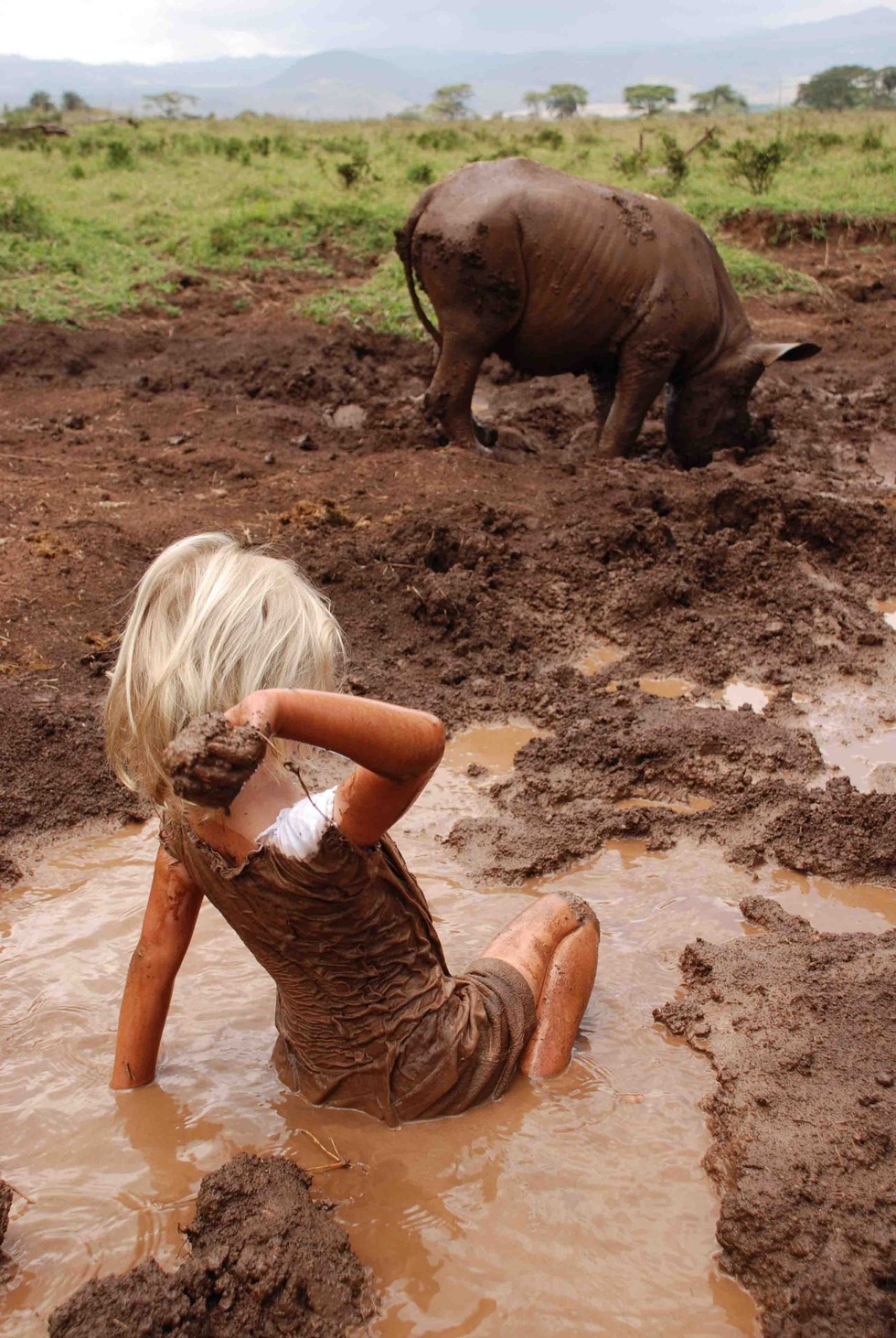 This incredible friendship inspired the successful children's book, Lola and Tiva: An unlikely Friendship, by Craig and Juliana Hatkoff.

The book is filled with photos of the little girl and her pet rhino in their best years, taken by the journalist Peter Greste. He said:


This shows a young human and a young animal, both responding to their mutual needs. Lola needed care and attention. Tiva wanted a dog and a friend more than anything. It's a beautiful story of friendship. 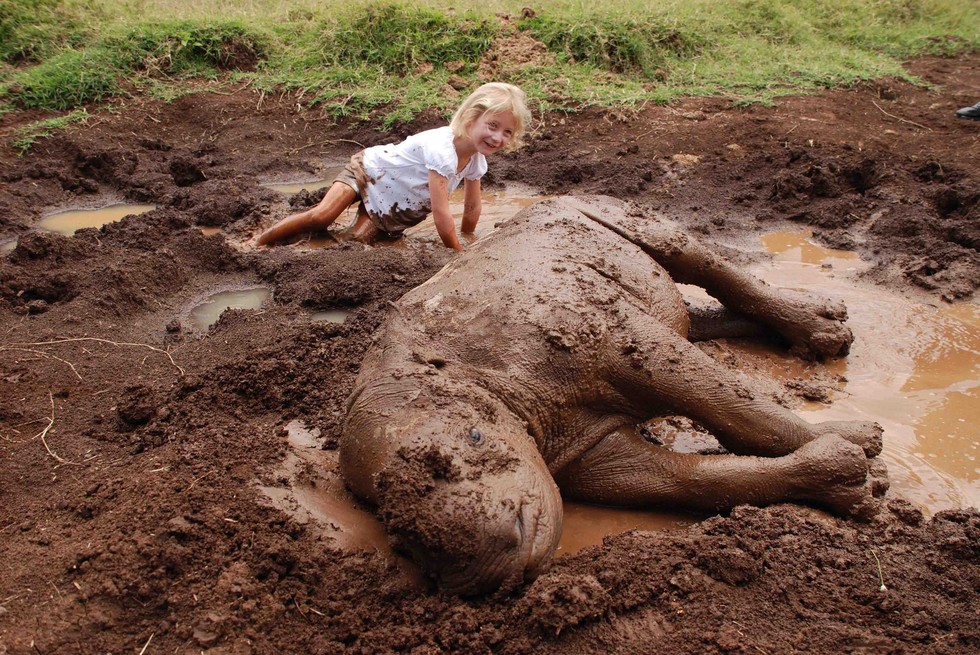 Rhinos are a critically endangered animal. In recent years, their numbers have decreased drastically as a result of poaching for their valuable horns. Now, some African countries are forced to dehorn their rhinos just to try and save their lives. To get involved in the cause or find out more about dwindling rhino populations, head to Save The Rhino. 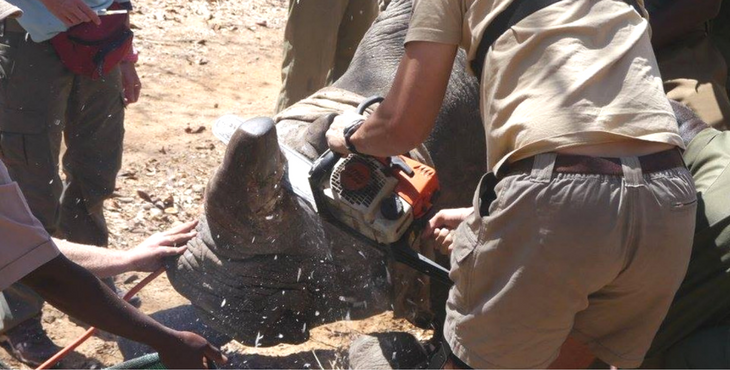