In August the association Four Paws succeeded in evacuating the last survivors of the Khan Younis zoo in Gaza, known as the "worst zoo in the world". The animals imprisoned in this zoo, situated right in the middle of the war zone, were living through hell.

Deprived of food, water and medical care, many animals didn't survive the extremely grotesque living conditions. Live animals were forced to live amongst corpses lying on the ground, dried out in the sun. 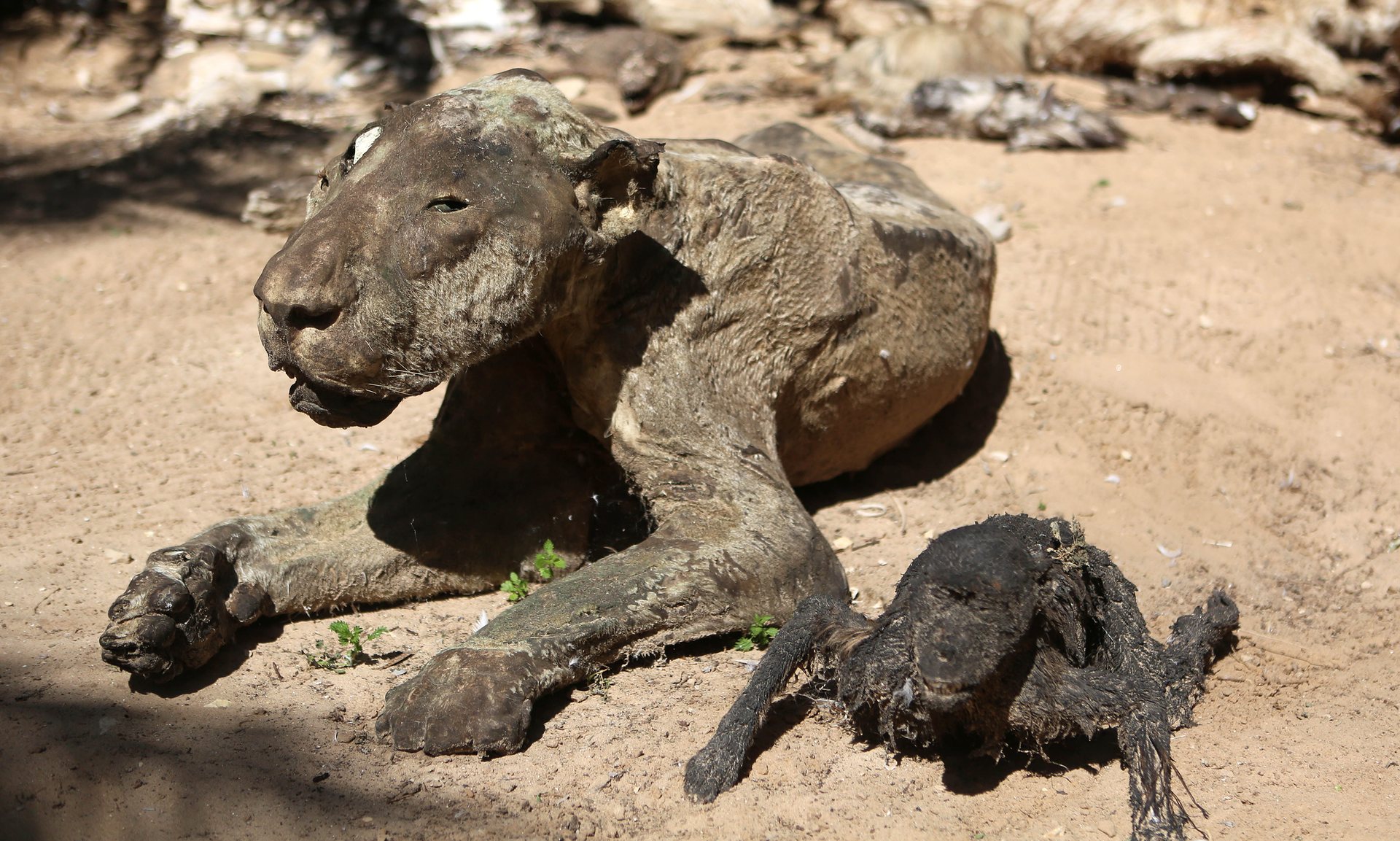 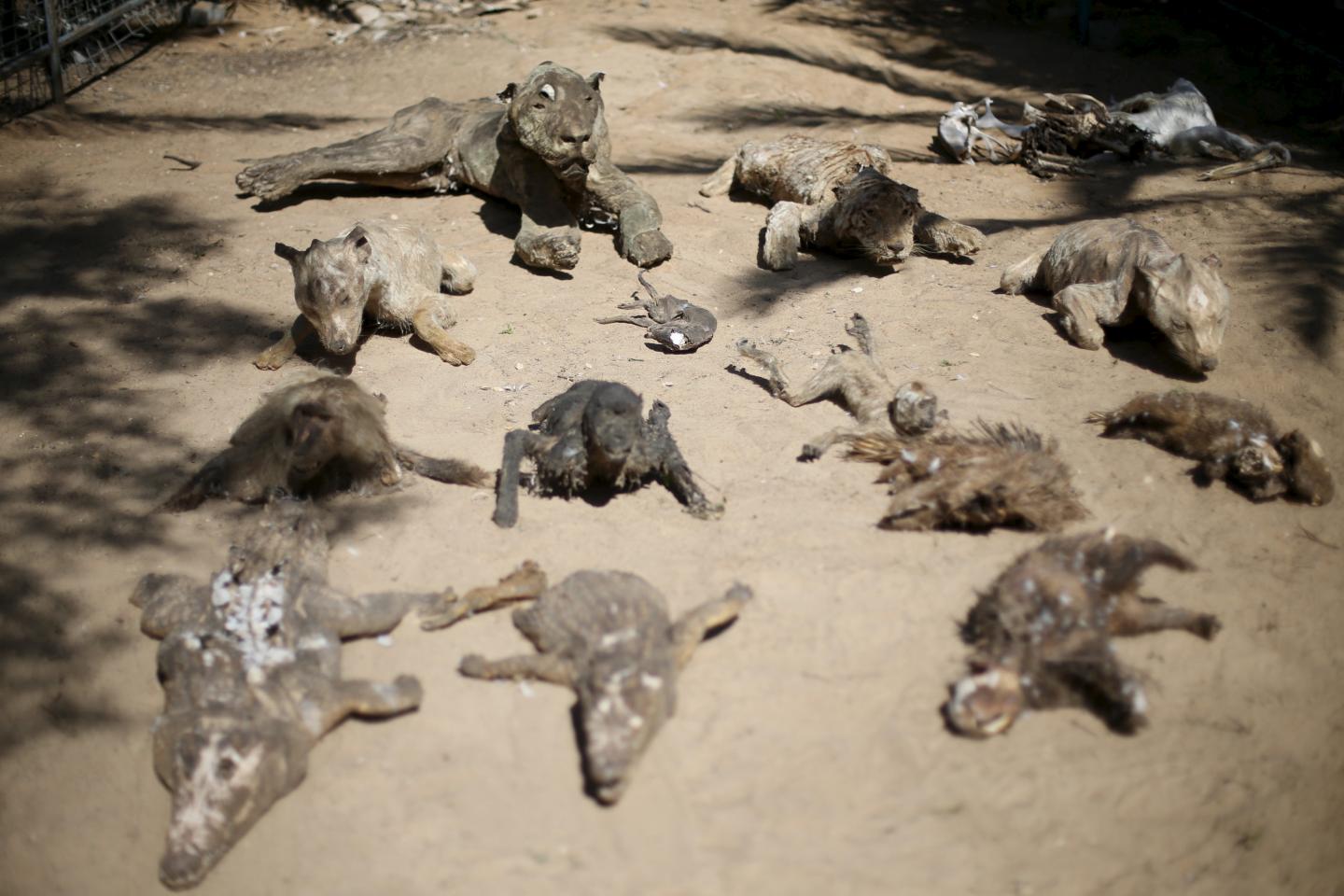 Four Paws has been fighting to close the park since last year, and they managed to save the remaining 15 animals. Amongst them was Laziz, a magnificent 9-year-old tiger. 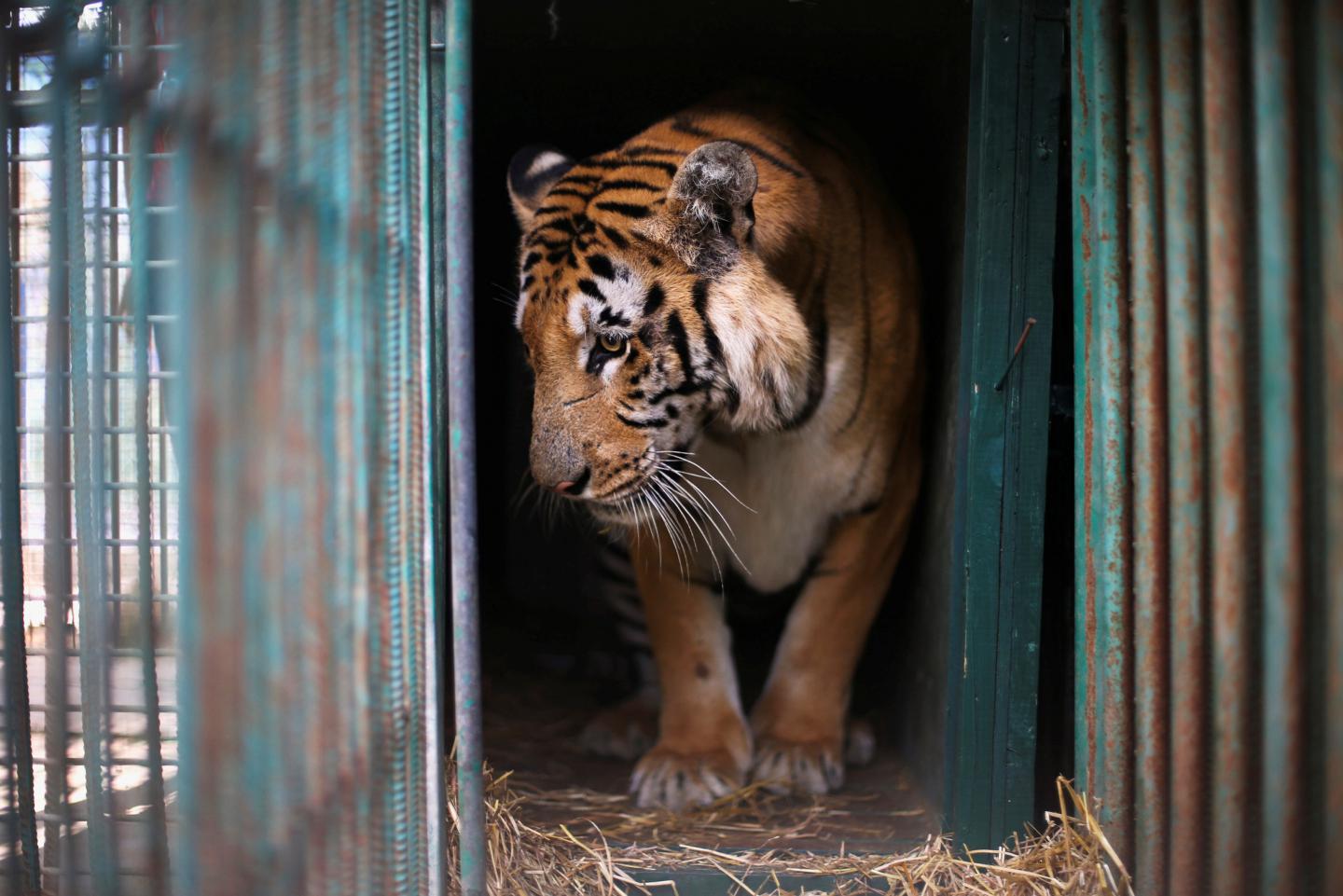 He had tragically spent his entire existence in a tiny cage completely deprived of stimulation and social interaction. But now, thankfully, the ordeal is over for this feline. After a long trip to South Africa, he has been freed at last.

Laziz made a start and went into his transport crate without hesitation. He even seems to behave more calm in the crate now than he ever has in his desolate cage. He will of course be provided with fresh water and food during his stay in the crate. Moreover, the crate will be cooled with ice and a fan. 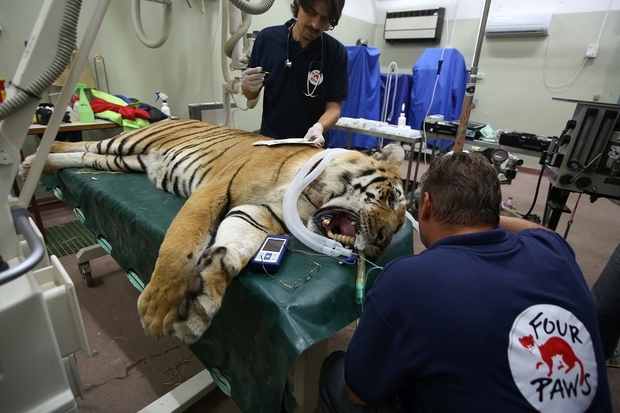 Upon his arrival at Lionsrock Lodge & Big Cat Sanctuary, where he will be starting his new life, Laziz immediately seemed comfortable and sure of himself… 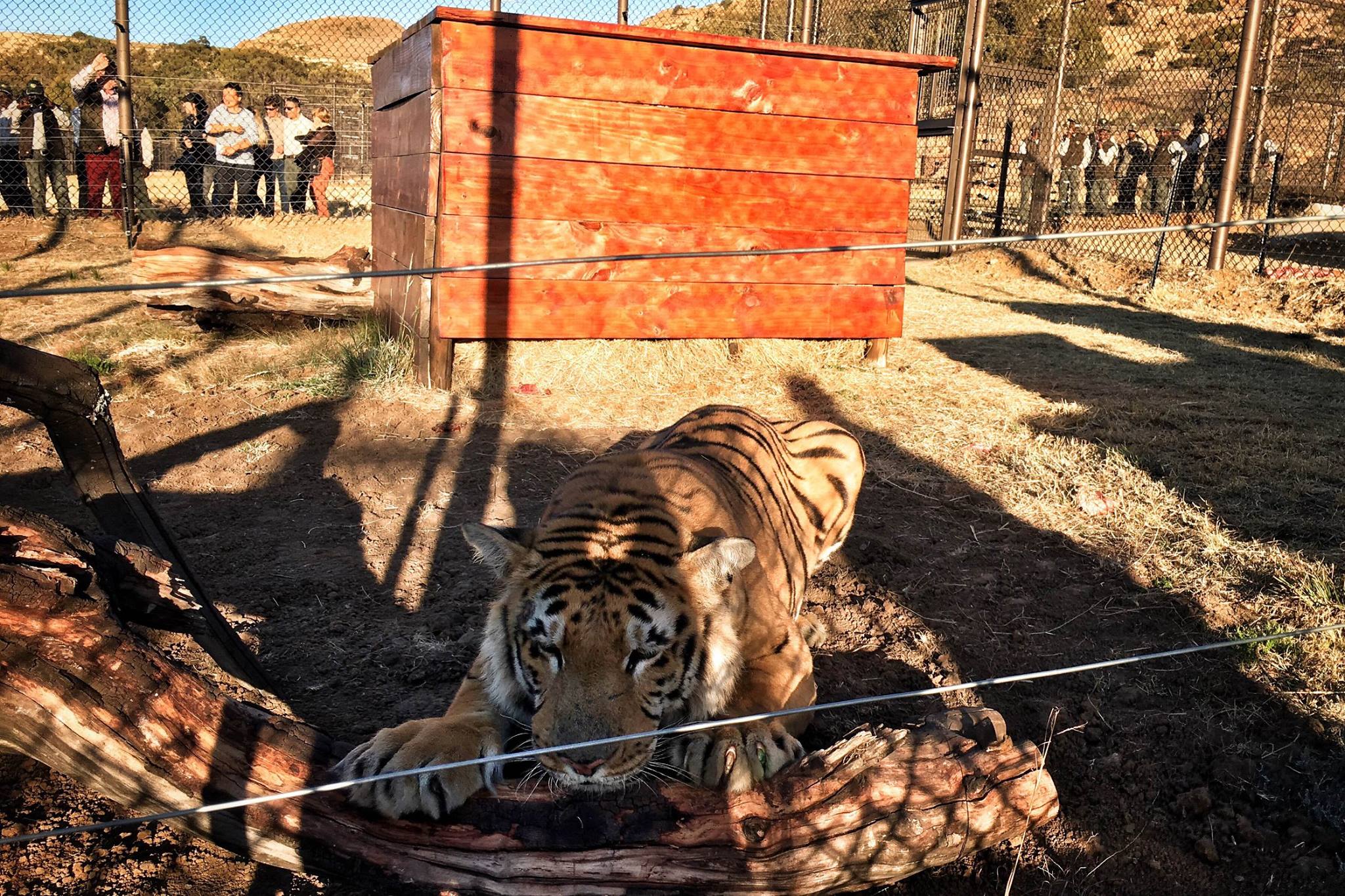 But soon after, he suddenly became closed off and wouldn't come out of his little hut, only showing himself to be be fed.

Fiona Miles, a member of Four Paws, told The Dodo:

We had the impression that he was so relaxed and confident when he arrived , but he is actually quite sensitive and will take more time than expected to come out of his shell and feel safe in his new home.

The change in environment played a big role, as well as the fact that Laziz was traumatised from his terrible past. But, luckily, this stress didn't last long. Four Paws shared good news – the tiger has started to overcome his fears and to be more friendly with the team. 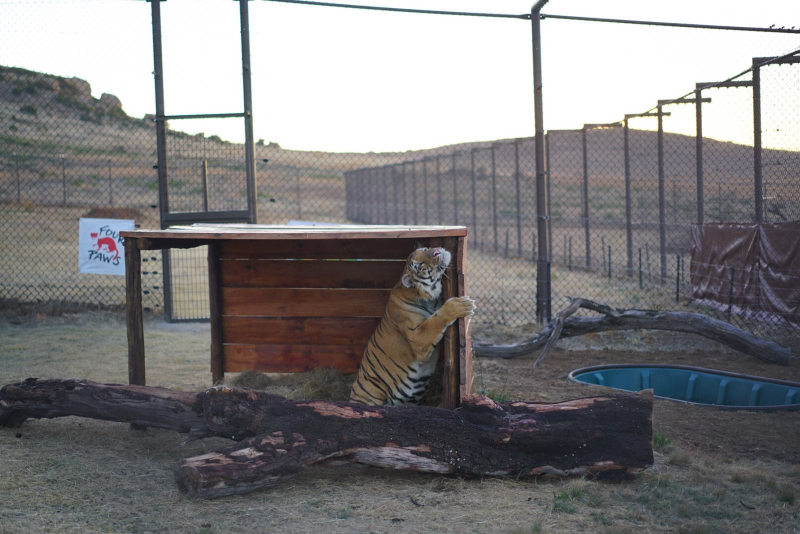 The association said in a message on September 17:

We have amazing news to share with you. Laziz decided to trust us, his care takers and came out of his house while we were there to check on him. As it is very important to reinforce positive behaviour as quickly as possible we took the chance immediately and tried to see if he would take some food from us. We were very pleased that he did and that he stayed close to us and relaxed for some minutes.

The caretakers wish to encourage and continue this behaviour for a number of days, often going to visit Laziz with treats so he will come out and realise that he is safe where he is now.

"We are repeating this routine since then twice a day. Every time he is increasingly relaxed and after taking his reward, he is staying outside with us for a while. This is a huge development and we are really happy about it!", continued the organisation. 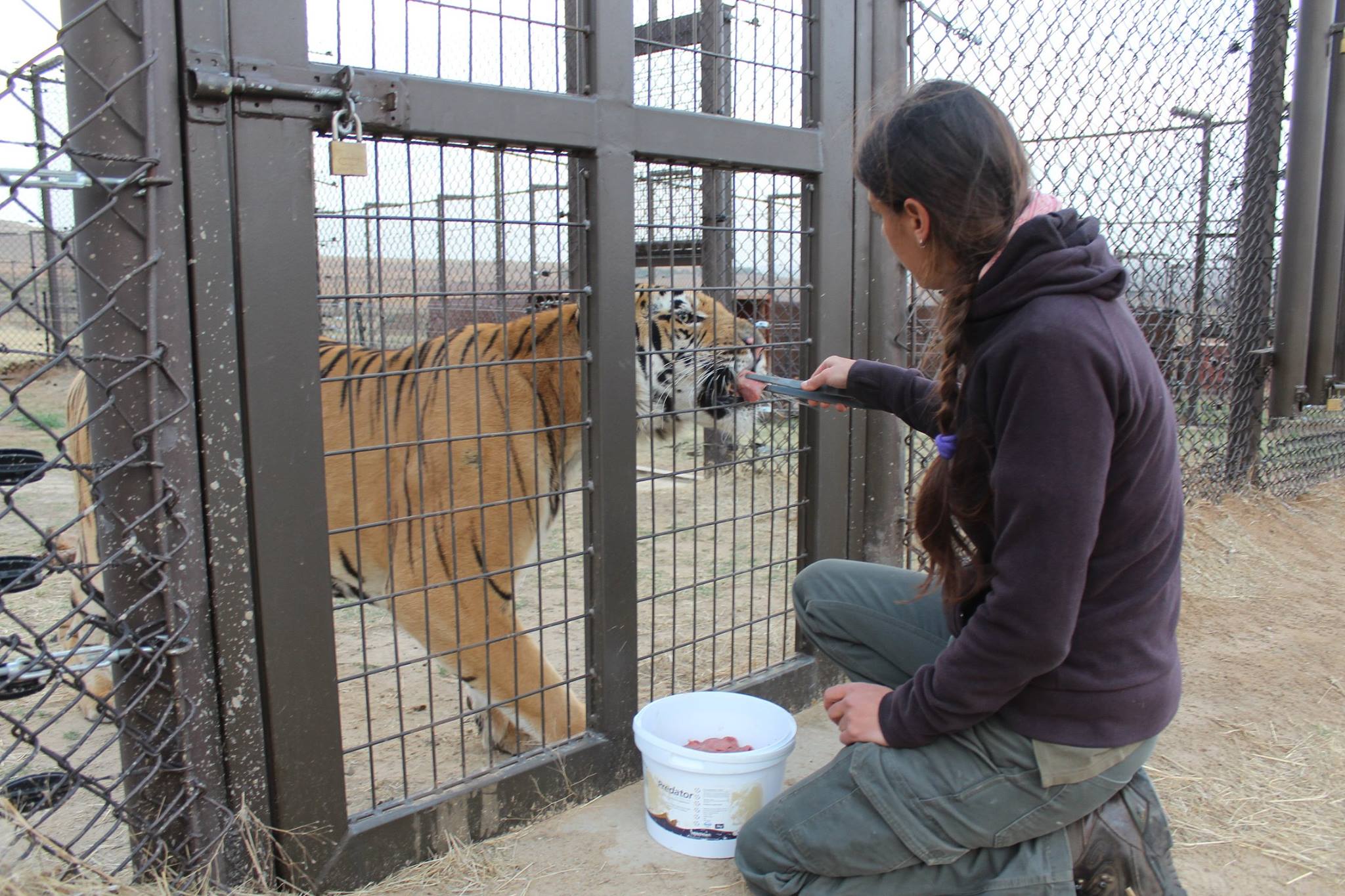 Laziz doesn't stay closed up in his hut anymore – he is enjoying his big new enclosure and seems to have developed a particular taste for wood, spending a lot of time scratching his claws and his body against his favourite log.

According to the volunteers, this behaviour explains that the qnimql has most likely never been in contact  with wood before.

Former zoo tiger can't get enough of woodAs promised a new update from Laziz: the tiger, who we rescued from a zoo in Gaza, becomes calmer from day to day and is spending more time outside his cabin. His new bigger enclosure at the LIONSROCK Lodge & Big Cat Sanctuary is right next to this one, so he is not going through another stressful journey. Whenever he is ready and relaxed enough that we can open the gate, he can easily walk through it and enjoy his permanent home. By the way as you can see in the video, it seems Laziz is quite into wood. We can't really say why, but we guess it's because he never felt wood before. Since Laziz probably never had wood in this form in his cage in Gaza, he literally enjoys sharpening his claws on tree trunk. In addition the supports of his hut are also good places to rub against, on the one hand of wellbeing reasons and on the other hand to mark his territory. We're thrilled that he enjoys this place so much and are curious how he finds his large enclosure! What do you think, why does he have such a passion for wood?

If you want to support our work and want to provide the former zoo tiger with an even brighter future, we would be pleased to receive a donation: http://bit.ly/for-the-animals-in-gaza-INT

With all the free time in the world, Laziz can finally enjoy freedom under the watchful eye of his caretakers at the sanctuary.

To find out more about Four Paws' work and to support their efforts, click here. 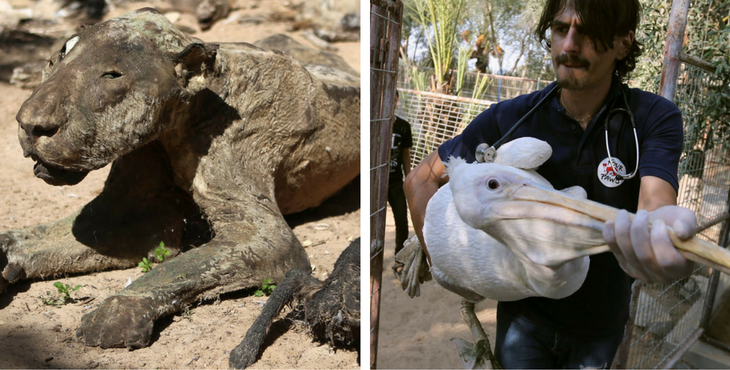