It's clear from these images published in 2015, that this female lion, dubbed Kiara, saved by the Mexican organization, Black Jaguar White Tiger Fondation, that this person means a lot to her. 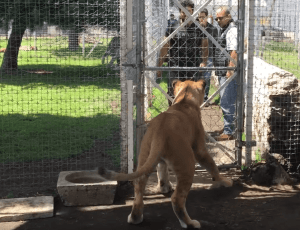 This man is her "adoptive father," Adolfo. When she was just cub, it was him who raised her, fed her, and took care of her. 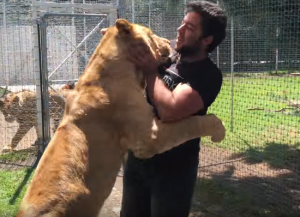 The connection between the two is obvious. Overwhelmed by the power of the animal embracing him, Adolfo lays down in the grass, and lets himself be tacked and gnawed on by Kiara, who has learned to control her force, so she doesn't hurt him. 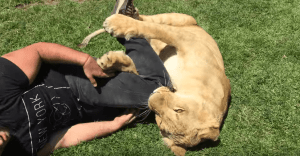 It's only after a few minutes of playing that she finally accepts to let go of Adolfo, though she doesn't leave his side. 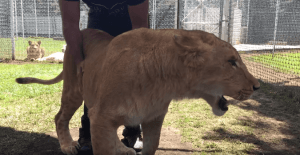 After being raised by Adolfo, Kiara was taken in by the "Black Jaguar White Tiger Foundation," a sanctuary based in Monterrey, Mexico, founded in 2013 by Eduardo Serio, a Mexican business man living in the United States.

The foundation takes in dozens of jaguars, tigers, leopards, lynxes, lions, pumas and many others, every year, who have been mistreated or misused for circuses, zoos, breeding or trafficking. If you wish to help them in this fight for these incredible big cats, you can make a donation by clicking here.

Watch the incredible video of the Kiara and Adolfo's reunion below: