In December 2016, an alarming study was published by the Zoological Society of London, ONG Wildlife Conservation Society and Panthera.

The statistics are dismaying, but a determined organisation called the Cheetah Conservation Fund is fighting to help the threatened species.

Cheetahs are the fastest land animal. With their greyhound-like build, they can reach speeds of 110km per hour (about 70 mph).

At the beginning of the 20th Century, cheetahs could be found across the African continent, in the Arabic Peninsula, the Middle East and Central Asia.

Now, their natural habitat has shrunken by 91%, and they are found in the wild in just a dozen African countries (though one colony exists in Iran).

What makes the situation yet more troubling is how unique cheetahs are among animal species.

Anne Schmidt-Küntzel, a geneticist for the CCF, explained to Le Monde:

If lions and tigers disappeared, the genus [animal classification] that they belong to, Panthera, would still have other representative species: leopards, jaguars […] but the cheetah is the only remaining representative of its genus, Acinonyx. It would mean the extinction of not just a species but a whole genus. 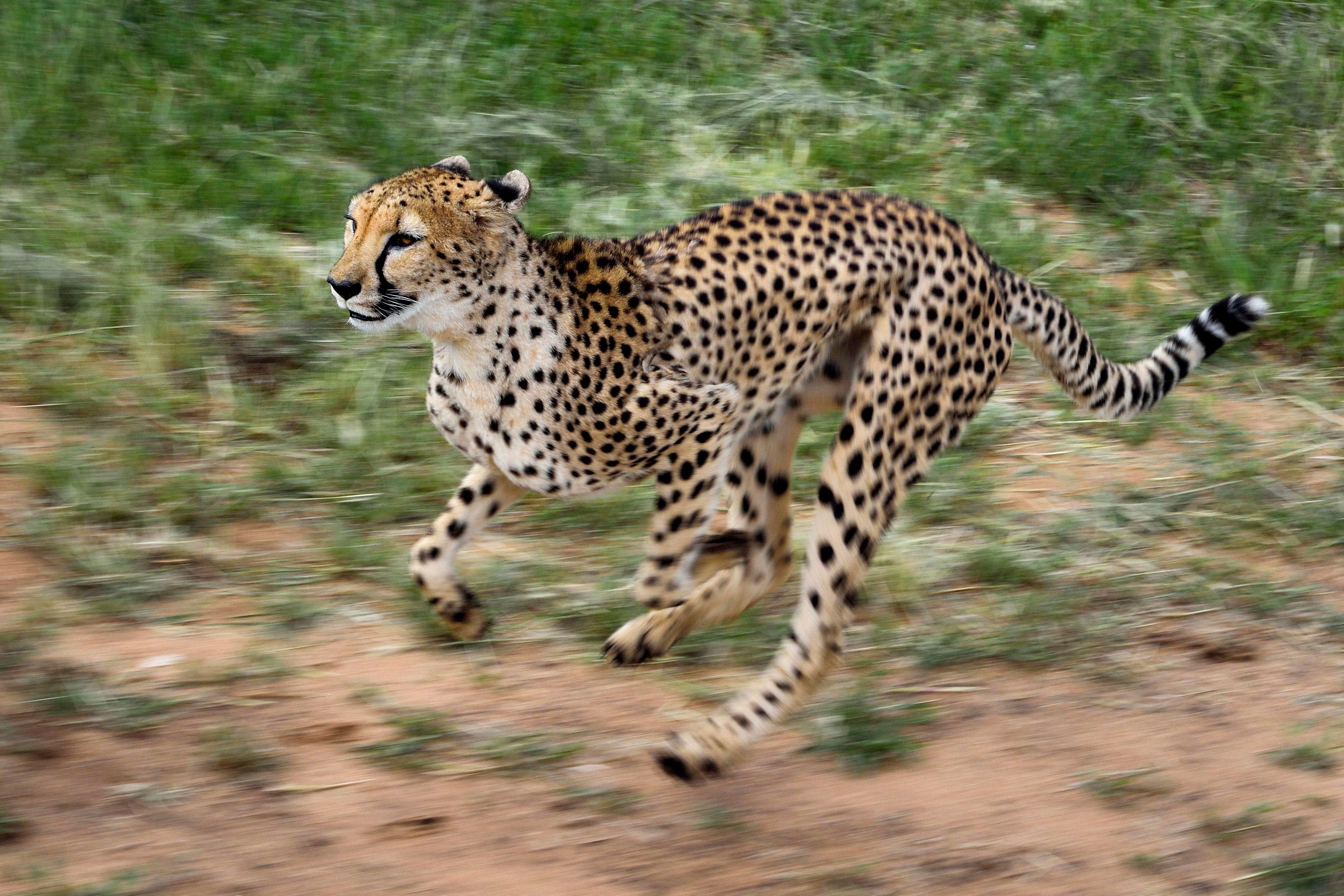 A cheetah at the CCF. Source: Le Monde

The Cheetah Conservation Fund was created in 1991 by Laurie Marker, a dedicated conservationist from Oregon, USA.

Marker has travelled the world studying and observing cheetahs.

In particular she has spent a lot of time in Namibia, which holds the largest cheetah population in the world – around 3,000 animals.

But here, as in the rest of the world, they are still in great danger of becoming extinct as human populations eat away at their natural habitat and farmers and poachers hunt them.

Marker came to Namibia in 1990 with the determined intention of proctecting the cheetah population there.

At this time the country had just declared its independence from South Africa.

This move was largely a peaceful one, and didn't entail the sudden, drastic redistribution of land that took place in neighbouring Zimbabwe ten years earlier.

So Marker was easily able to get some 270km of land just north of the capital, Windhoek.

In this remote area, she was able to build facilities thanks to private donors.

She then began treating injured, ill or orphaned cheetahs, the strongest of which were released back into the wild.

A third of the cheetahs treated by Marker are kept at the centre for further study – even nowadays, little is known about the animal. 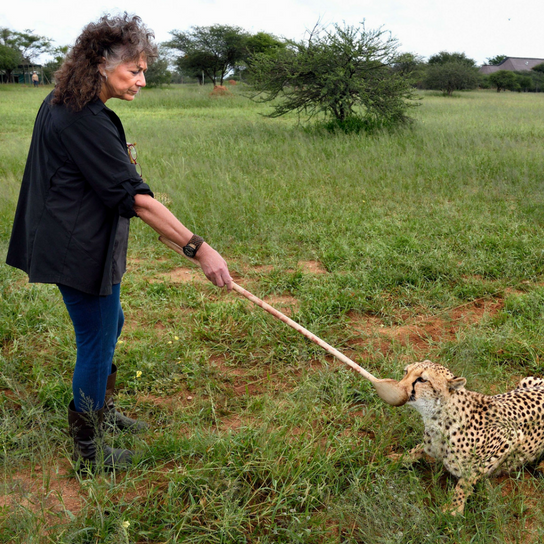 Laurie Marker, the founder of the CCF, with a cheetah at their base in Namibia. Source: Le monde

The cheetahs which remain at the centre also provide revenue through tourists – 10,000 people visited the CCF facility in 2016.

27 years later, Marker's mission has flourished. The CCF now boasts a laboratory where biologists and geneticists study the species.

Their research is published in journals and discussed by review panels.

Marker herself was awarded a doctorate in zoology from the University of Oxford in 2002.

The CCF has developed into both a centre of scientific excellence and a major tourist attraction, equipped with 20 full-time employees and as many interns from all around the world.

They care for 36 cheetahs who live on large areas of land, unconstricted by enclosures. 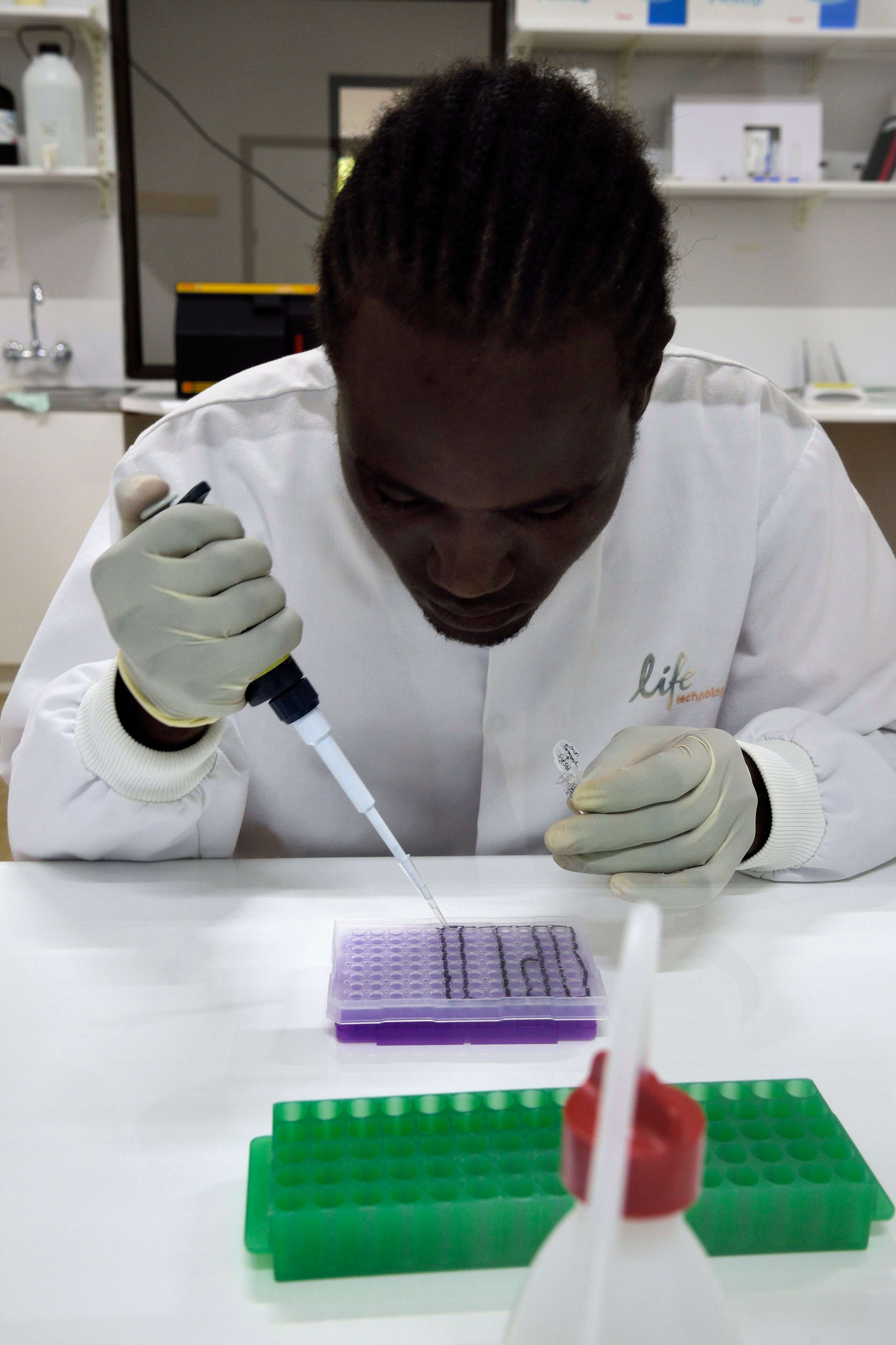 A biologist at the CCF laboratory. Source: Le Monde

But the journey hasn't been an easy one.

Farmers in Namibia have been fighitng a long-standing battle with the cheetahs, whose main prey – cattle, goat and sheep – are also the farmers' livelihood.

Though cheetahs are not the only wild animal to blame, farmers lose on average 10-15% of their sheep to predators, and 3-5% of their cattle.

Traps and gunfire from farmers trying to protect their livestock are one of the biggest threats to Namibia's cheetah population.

To resolve this conflict, Marker turned to her previous experience working with cheetahs in Oregon for inspiration:

In Oregon, around the safai park I worked at, farmers' herds were attacked by coyotes. To protect themselves, they used guard dogs – kangals, a kind of huge Anatolian Shepherd dog. Namibian farmers use dogs too, but to herd their animals rather than to protect them. 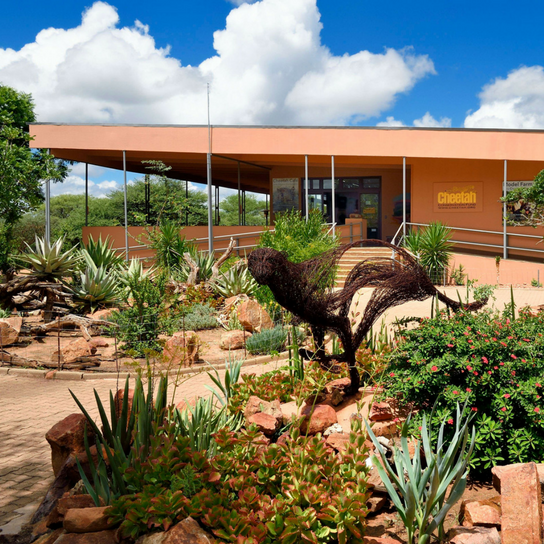 So in 1994, Marker brought some of the huge kangals over.

Though they are built for fighting, this isn't their main method of keeping cheetahs at bay – their presence alone is enough to deter the light-built cheetahs from persuing the herds.

Though the first farmers to take on some of the dogs saw astounding results – attacks on their herds fell by 80-100%. 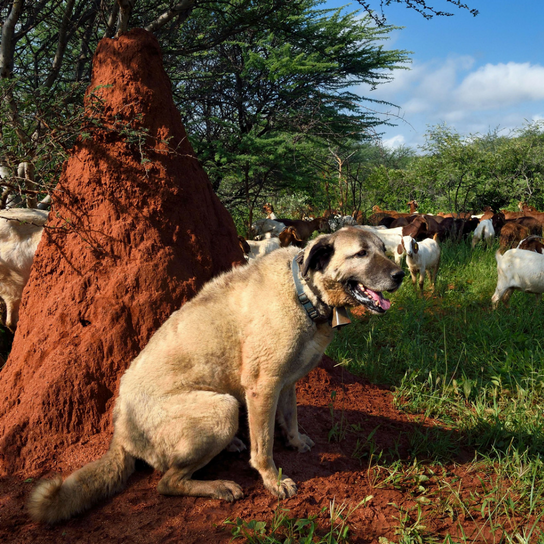 A kangal with a herd of goats in Namibia. Source: Le Monde

Nonetheless, many farmers were harder to convince.

The majority were reluctant to care for more dogs, to change their routine or to fork out for the kangals (the CCF sells the dogs for $70, or around £50).

The biggest complaint of all was that farmers didn't want to take instructions from an American with no farming experience.

Undeterred, Marker set about creating her own farm.

There are also 11 CCF kangals, which can learn to be guard dogs there before they are sold to farmers.

Marker now regards the venture with kangals as a huge success.

To this day, we have sold 600 dogs. I get requests from all over Namibia but also from South Africa, Angola, Botswana […] in Tanzanie, some people want to try out kangals against leopards and lions. There's a waiting list of at least one year!

The CCF farm has another huge advantage; twice a day, 50 of the goats are milked, producing around 90 litres of milk per day.

Staff at the farm then make cheese from it, which is sold to neighbouring homes and in shops in the nearby towns.

This provides precious revenue for the CCF. 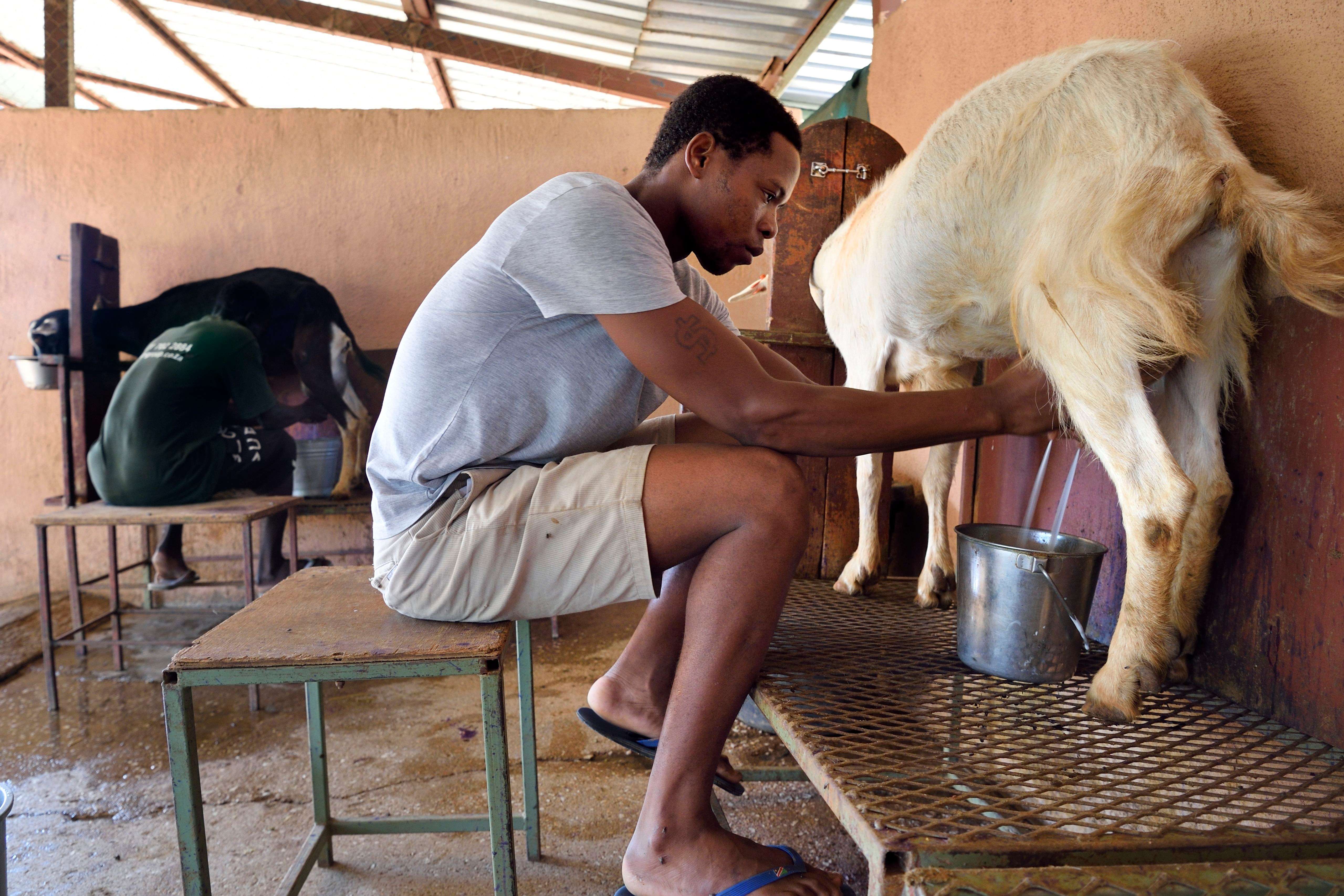 Goats being milked at the CCF farm. Source: Le Monde

Though the relationship between farmers and cheetahs has vastly improved thanks to the work of the CCF, the animals are still in grave danger.

They are threatened by the ever-growing human invasion of their natural habitat, as well as by drought and deforestation.

Bruce Brewer, an American biologist who works with the CCF, explained the dangers of this to Le Monde:

Due to drought, over-grazing and the hot, dry climate, areas of Namibia previously covered by lush Savanna are now overrun with thorny shrubbery. Cattle and cheetahs now have great difficulty surviving there. So the areas they can thrive in have been reduced a great deal, which increases the chances of them running into one another.

Restoring the swathes of habitat lost to deforestation, drought and human activity is a crucial part of the effort to combat the disappearance of the species.

As such, since 2002 the CCF has been undertaking a deforestation project on their own land in an attempt to increase the areas of habitable land so that cattle and cheetah can live alongside one another peacefully.

The programme has been dubbed Bushblok, and involves cutting down barren shrubbery and transforming it into fire wood in a small factory owned by the CCF and managed by Brewer.

Every year we produce several hundred tonnes of firewood and coal, and we hope to eventually reach several thousand tonnes per year. Selling the wood doesn't bring in much income, but the goal is less to make a big profit and more to inspire similar schemes elsewhere in Namibia. 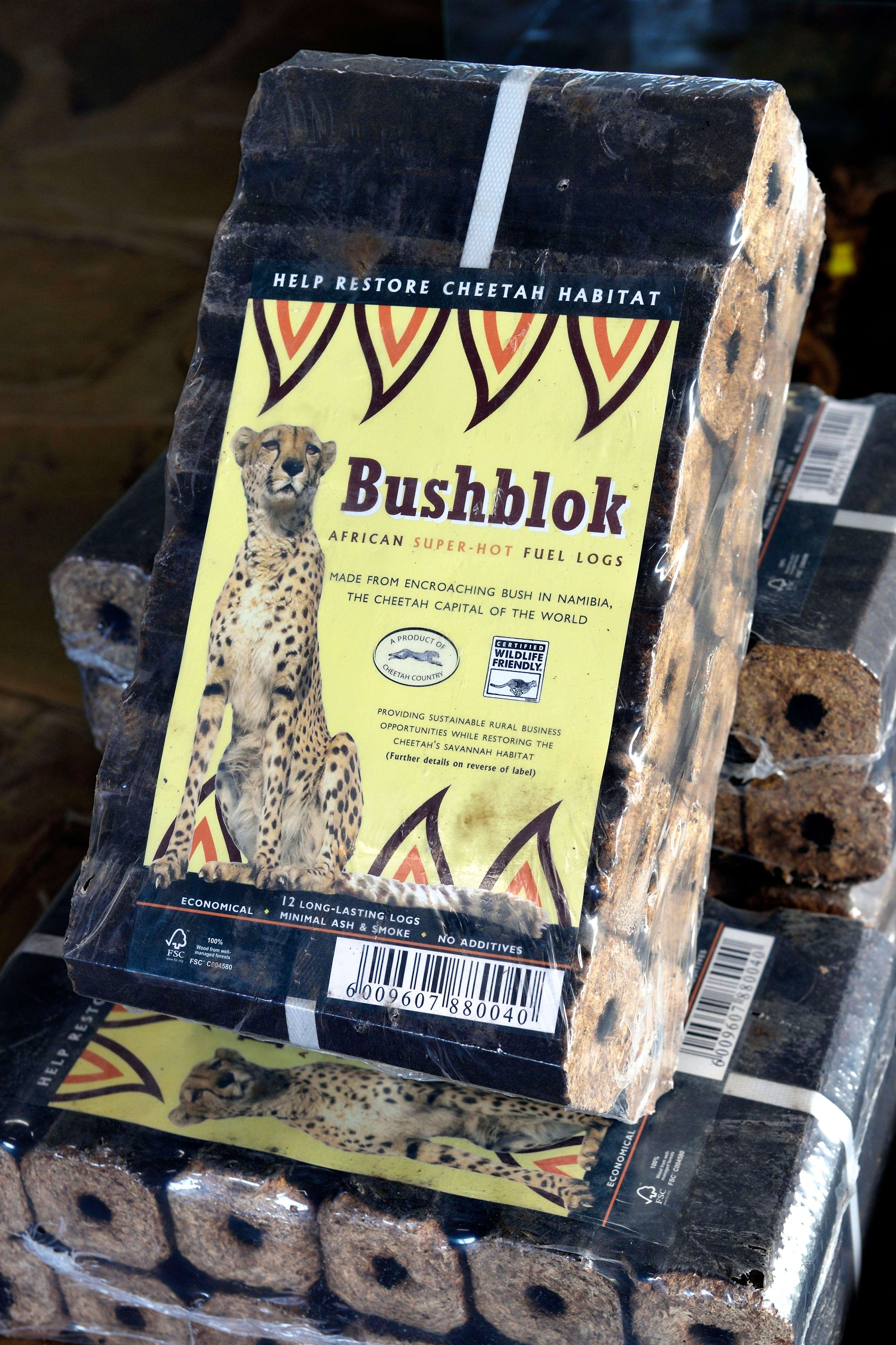 You can support the CCF and the incredible work they do by clicking here, making a donation and helping them to continue saving animals.