As Hurricane Harvey raged through Texas last week, hundreds of people were forced to leave their animals as they fled to safety. Sadly, many evacuation buses and shelters reportedly turned people with animals away to free up space for families.

Luckily, even if they were left in flooded areas, many animals survived, although they were often stranded by the water, which reached nearly 50 inches in some areas. 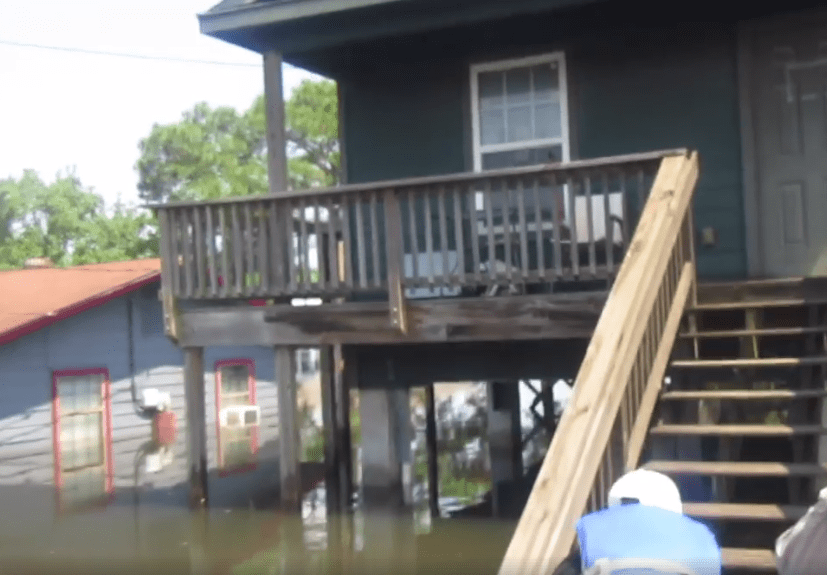 However, they were not left to survive the disaster alone. As well as heroes intervening when they found animals in distress, volunteers from both in and out of the state have teamed up to rescue Texas's animal citizens.

Austin Alive, The Humane Society, the SPCA, and even an entire Facebook group have been working tirelessly to locate and care for all the animals that weren't able to stay with their families when the storm tore through Texas.

She was trapped, hungry & scared. Our rescuers spotted this timid dog on the balcony of a house surrounded by flood water. #Harvey pic.twitter.com/VAZdqIuz7x

People for the Ethical Treatment of Animals (PETA) also sent a team to head out into the waterlogged streets in search of stranded animals. On September 2, they heard cries and whimpers coming from a house and launched into action.

The noises were coming from a brown and white dog trapped on the balcony of the house, alone and hungry in the middle of a flooded suburb. Armed with tasty food and kind words, the volunteers coaxed the frightened pup out from behind some furniture and got her safely into the boat.

Safe & dry ❤️ Our rescue workers comforted her as they took her to a local shelter! #Harvey pic.twitter.com/BMvE3TOtjF

Although she was very scared at first, the sweet pooch soon calmed down when she realized that she was being taken to safety and relaxed enough to enjoy a lovely scratch behind the ears.

According to PETA, she was taken to a shelter in a safer zone, where she will hopefully be reunited with her family once their home becomes safe enough to return to.

Watch a video of the rescue below:

We found this stranded dog whimpering and crying on the balcony of a house surrounded by floodwater. We rescued her and took her to a shelter ❤️ #Harvey

Posted by PETA (People for the Ethical Treatment of Animals) on Saturday, September 2, 2017

Animal rescue organizations and shelters in and around Texas are still desperately in need of donations to help cope with the hundreds of displaced and abandoned animals that have been affected by the storm. If you can, please donate to organisations such as Austin Alive or the Houston SPCA.