In the town of Phang Nga (southern Thailand), a man has been filmed beating an elephant for over an hour with a long wooden paddle. The Wildlife Friend Foundation Thailand (WFFT), a charity which fights for animal rights, has since been alerted and shared the video. 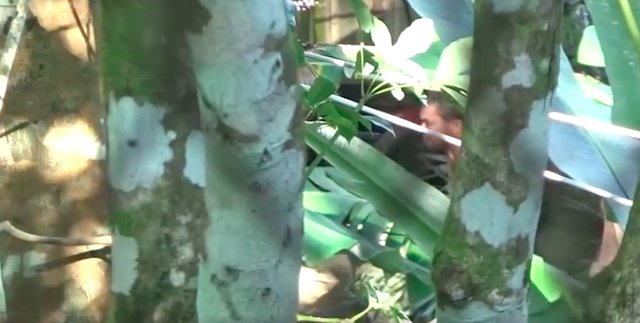 The video was filmed from behind some trees, out of sight. You can see a man shouting at an elephant while hitting him violently on the legs, head and flank. The animal, which is forced to carry a chair on its back, designed to accommodate tourists, is chained up and unable to defend itself.

The elephant is completely powerless against the abuse, while also being blind in at least one of its eyes. According to The Dodo, this won't have been the first time the elephant has suffered from this kind of violence and is in fact something that probably happens on a daily basis.

The video has outraged people on Facebook with one commenter writing:

I can’t bear to watch, boycott these awful places. I’ve never even thought of riding an elephant, why would you?

According to Tom Taylor, one of the directors of the charity, the man who filmed the video was also in a state of complete shock at the violence the man was showing.

The wooden paddle used to beat the elephant – Source: WFFT

Unfortunately, incidents like this are widespread and not just limited to this particular elephant, especially in South East Asia where elephants are largely used for tourist attractions. In this specific camp, 20 other elephants are exploited every day just to keep the customers coming. Whether it be elephant rides or circus shows, these poor animals can't seem to escape the cycle of cruelty.

The reasons behind why this man was so cruel towards this particular elephant still remain unknown. According to Tom Taylor:

It could be for a multitude of reasons. Why would anyone feel so angered to commit such an act? I will never know. She may have ignored one of his commands, she may have simply been standing in the wrong positions, she may have done nothing at all. The man may have been angry with something unrelated and she had to bear the brunt of his anger.

The charity is currently working hard to try and help this elephant but is unable to give away more information on this at the moment.

Practices like this are very common in Thailand where elephants are often the target of tourism. They are victims of a barbaric training process known as "the crush" where the aim is to break the elephant's spirit in order to make it totally submissive. Baby elephants are generally taken away from their mother at a young age where they are then put into cages, starved and made obedient. 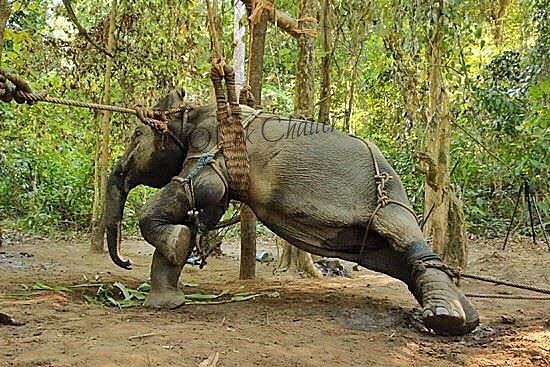 Picture of an elephant being put through "the crush" – Source: A Beating Heart

Currently in Thailand, there are around 3500 elephants living in captivity, with most, like this elephant, being used for tourism purposes.

Video (Warning! Some images may be distressing)

Undercover footage shows an elephant at a tourism camp in Southern Thailand, being beaten up for hours as she did not obey orders during the working time. This elephant is completely blind in her right eye (see the cataracts) and has limited eyesight in her left eye. She still has to walk tourists every day… After watching the video, will you still feel it is ok to ride an elephant?