On November 2, a specialist unit of the animal cruelty department of police in Texas received an emergency call. A dog who seemed dead had been abandoned in a cage on the side of the road.

The police found an unconscious animal, lying in her own excrements. Ewa Wagner, one of the agents, took a step closer and noticed a very slight breathing – the pup was alive, but only barely. 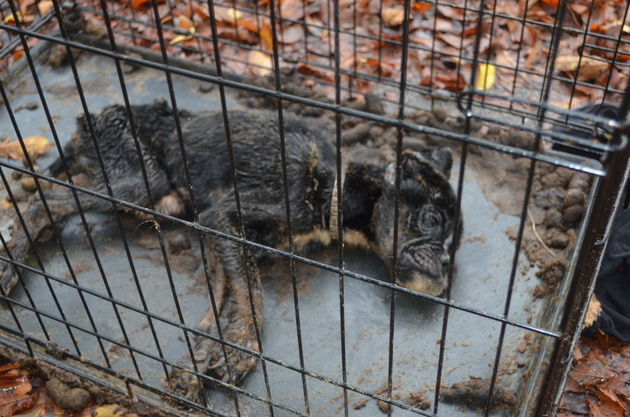 They had to act quickly as the situation was already extreme. They drove in the ambulance to a veterinary clinic in Austin. Wagner told Huffington Post:

Her temperature was too low to even register on a thermometer and she wasn’t moving at all. We didn’t think there was any way she would survive. 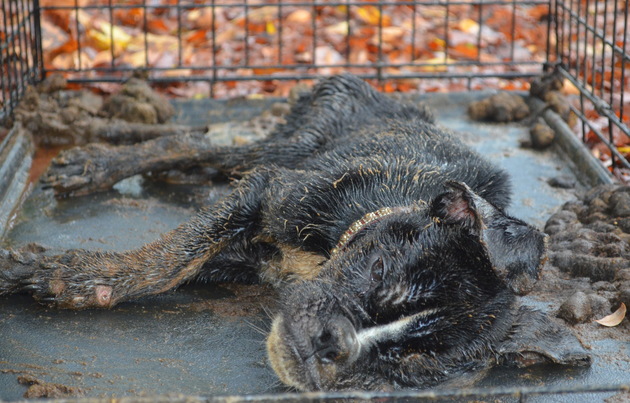 The dog, who weighed only 4,3kg at the time, and whose heart was beating very slowly, was taken care of by veterinarian, Elizabeth Mancera. She remembers:

The detectives pulled up and said they had a dog who was barely alive. They handed her almost-lifeless body to me and I laid her on the exam table. She was covered in feces and freezing cold and wet. I talked to her the whole time and even though she couldn’t move her body, she looked up at me with pleading eyes. I kept telling her she would be okay. 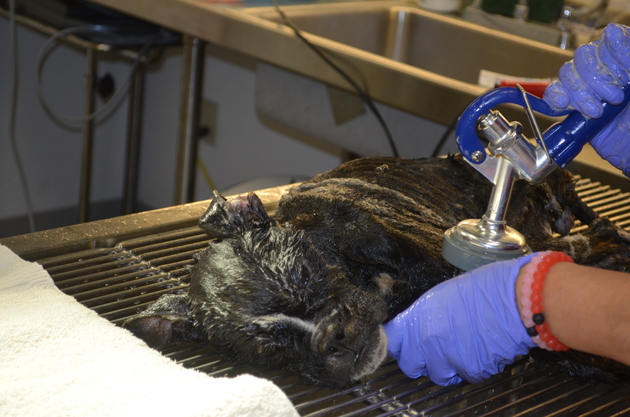 Over the course of a several hours, the medical team administered emergency treatments to help the pup fight against death. With a hairdryer, they warmed her up so that her vitals could kick back in. The vet continued:

During those first few hours I just talked to her and told her she was loved and that nothing bad would ever happen to her again. I told her she needed a name and I picked Sophie. When I told her that was her name, she raised her head for the first time and looked at me. I knew then, Sophie would live.

Thankfully, Sophie's strength started to come back slowly and Elizabeth took her home that evening, keeping her close the whole night.

The pup remained unable to move or stand up for several days. But nothing could stop her progress. 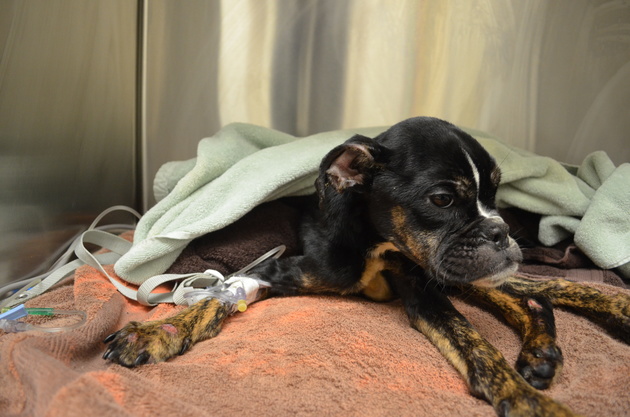 Sophie rapidly gained weight, supported by Elizabeth's love and care, and after only a few weeks, she already weighed three times more than she had when they found her. She found enough energy to move around and stroll around the house, always accompanied by another rescue dog. 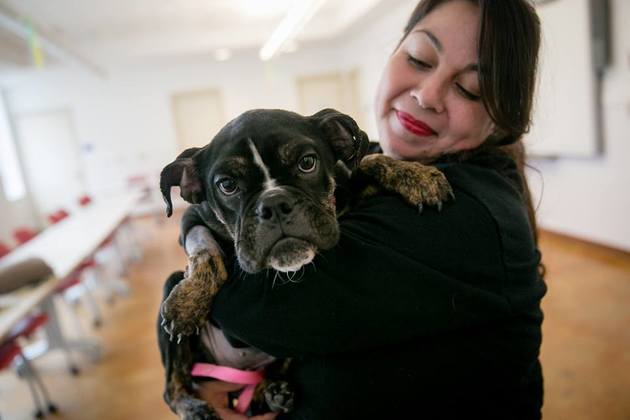 To everyone's delight, Sophie was officially adopted into Elizabeth's family at the end of November, where she would never be cold or neglected again:

It was right around Thanksgiving and I was watching Sophie gently play with my dog. She was so happy and I could see a special connection between them. After all Sophie and I had been through, I knew she was going to be my dog. I reached down and kissed her, letting her know she had found her forever home.

To this day, no-one knows exactly what happened when Sophie was abandoned in the street. But an association is promising a $5000 reward for anyone who can find the person who did this cruel thing. 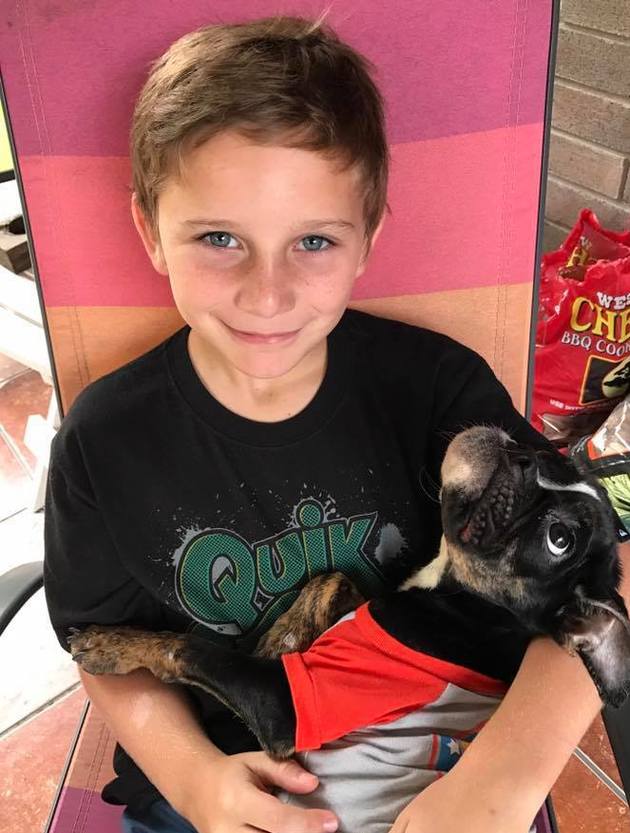 The police unit who found Sophie were so touched by her story that they wished to remain in contact with her. They even take her with sometimes when they go out to teach people about animal cruelty, and she has become the team's representative. 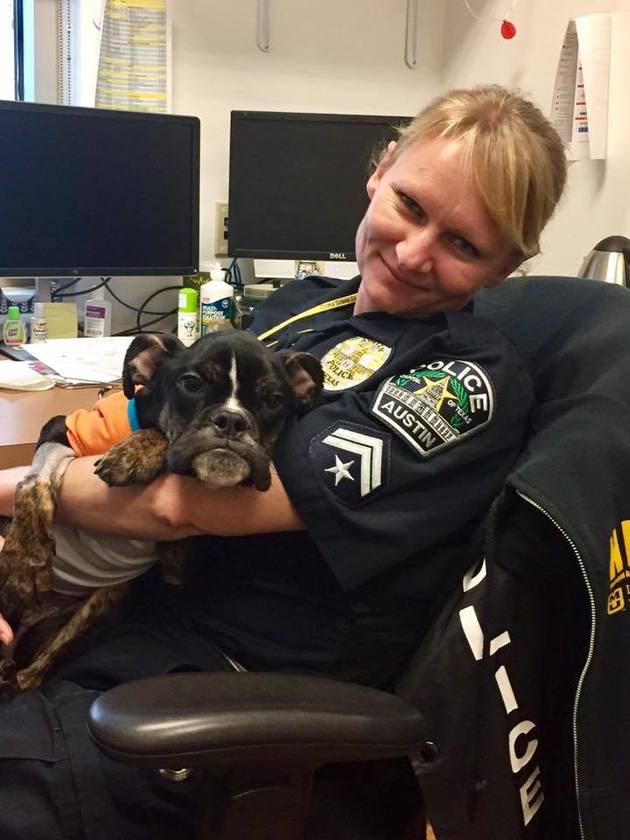 Sophie underwent an incredible transformation and today she enjoys peace, lots of food and an enormous amount of love in her new, happy home. Elizabeth has offered this pup a second chance at life and a home she could only have dreamt about.

The day I rescued Sophie I promised her nothing bad would ever happen to her again, and now I get to spend the rest of her life making good on that promise. She’ll never miss another meal and she’ll never be cold again, that I am sure of.