In the state of Tasmania in Australia, beachgoers discovered a minke whale stranded on the sand and did everything possible to keep her alive long enough for help to arrive. 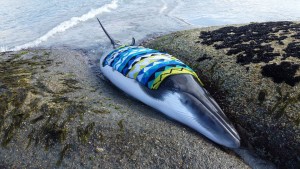 It was a group of swimmers who spotted the presence of the marine mammal, immobilized on rocks near the shore. The Marine Conservation Program of Tasmania indicated via Facebook:

The juvenile dwarf minke whale was stranded on rocks on Diamond Island at Bicheno and reported to program biologists via the Whale Hotline.

According to them, the people present on the beach at the moment of the incident had a laudable response by constantly bringing the whale water while waiting for the arrival of rescuers. To avoid dehydration and sunburn, they also lay a wet towel over her. 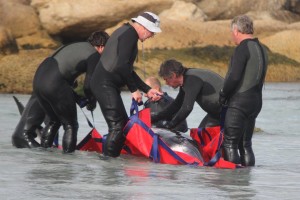 Thanks to them, the cetacean was still alive when marine rescuers arrived; they placed the animal on a special sheet to transport her easily to deep water, where they let her go. Local authorities explained:

Once released the whale responded immediately and swam away strongly. Checks of local beaches the following morning found no sign of the whale, helping to confirm the rescue’s success. 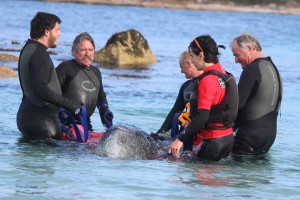 More frightened than hurt, thankfully, because of the kindness of the these Australians who managed to save the animal's life. You can watch the full video of the rescue below:

Published by Whalestas on Sunday, September 4, 2016