Taylor is an adorable Labrador who served under the American flag in Afghanistan, reports the site Little Things.

She worked alongside sergeant Tom Hanson for many months during two deployments. She saved many American lives and detected bombs right beneath Sergeant Hanson's feet, saving his life too. Taylor was so good at her job that the Taliban had a bounty on her head!

But at the end of their deployment together, the Labrador left the army before being put up for adoption, ads is the case with most former military dogs. Sergeant Hanson got first choice, but things were complicated and it can often take months and cost thousands of dollars for soldiers to  be reunited with their war partners. 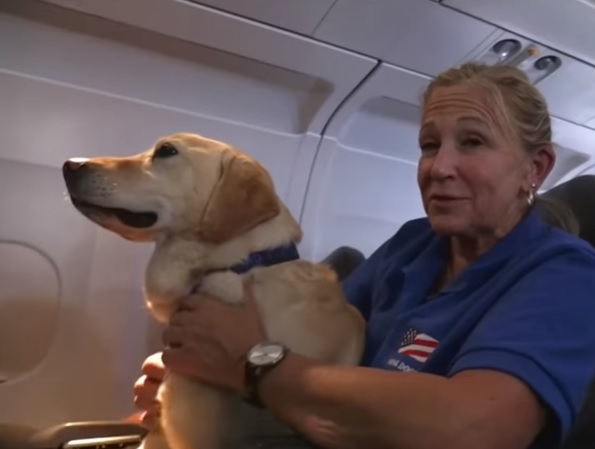 This sad situation has touched Molly Oliver, a flight attendant who is a dog lover and a grateful American citizen. As soon as she heard about Taylor and Tom, she decided she was going to help. She paid out of her own pocket and flew first class with the pup to get her back to her former partner.

When they arrived at the airport, Taylor immediately recognised Tom. She ran towards him as he was waiting with open arms… The soldier admits:

It's as if a part of me has been missing. Seeing Taylor, that will make me whole again.

Today, the American military enlists around 2500 dogs and not all of them have endings as happy as Taylor's.

In February of 2016 an article in the New York Post brought to light the absurd and cruel treatment of army dogs by the military after they had served their country for their whole lives. One of the soldiers explained:

I guess I had PTSD before, but I never really noticed till I gave Fistik up. I started having nightmares. I never experienced that before. She made ­everything better for me — that’s the best way I can describe it.

The only consolation for these soldiers is that their dogs will stay alive. In fact, before the passage of the Law of Robby in 2000, the war dogs were euthanised once their military services were finished.

Dogs, as humans, also suffer from post-traumatic stress symptoms once they return from war. Just like their soldier partners, they leave war with lasting effects and images in their memories, and going back to a normal life after that can be very difficult.

Watch the touching and beautiful moment that Taylor and Sergeant Hanson meet again in this video: