Wild animals are fascinating. Whether they are witnessed in the wild, on a screen, or in a sanctuary, these majestic creatures capture millions of imaginations every day.

But, for some people, this isn't enough.

A study published in October 2016 by the Born Free foundation found that thousands of 'exotic' animals are being sold online across the United States, from smaller animals, such as snakes and Fennec Foxes, to large, incredibly dangerous and often endangered creatures like lions, tigers and bears. 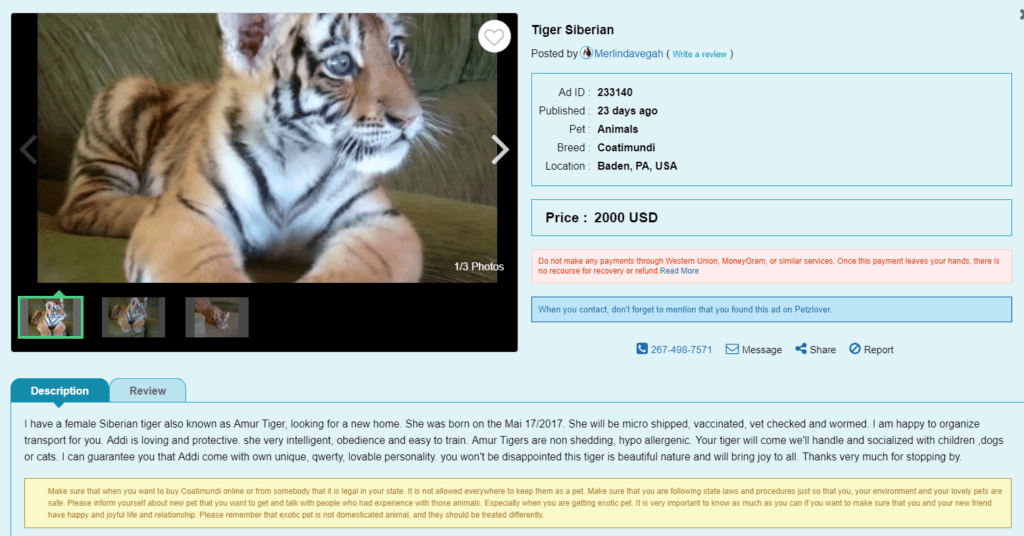 Following on from a 2007 study about the lives of 'exotic' animals kept in homes and roadside zoos, the new study monitored online adverts for a variety of wild animals for sale as pets or 'breeders' on 4 different websites. Over a 3 month period (March – June 2016) they saw at least 3706 individual animals for sale.

The CEO of Born Free, Adam Roberts, said in a press release:

Online ads have made the dangerous and cruel exotic pet trade easier than ever before. People are purchasing 'pet' monkeys, tigers, wolves, snakes, and more with one quick click.

According to the report, around 55% of these animals were babies under a year old, a fact that is particularly disturbing when the ads rarely provided information about the creature's species, health or behavior, or offered any instructions for care. 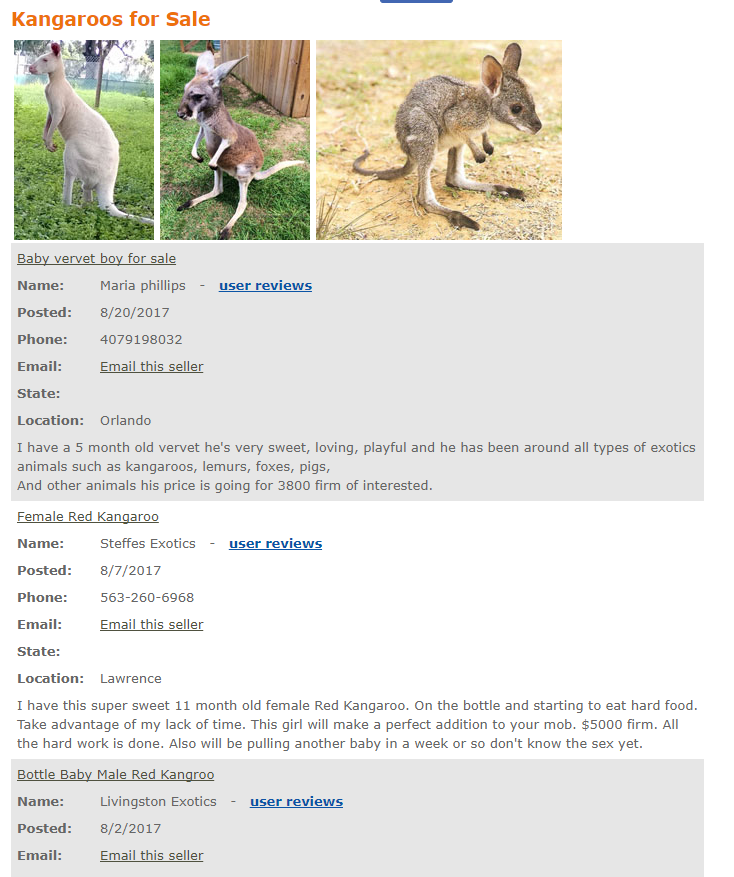 Research showed that many 'breeders' of these animals were churning out litter after litter for profit, which means that tens of thousands of vulnerable, baby animals could be in inexperienced hands across the country right now.

The animals are often abused and mistreated for performing completely natural behaviors, or reacting aggressively because they are being kept and handled inappropriately. This is despite the sellers insisting that these creatures are tame. 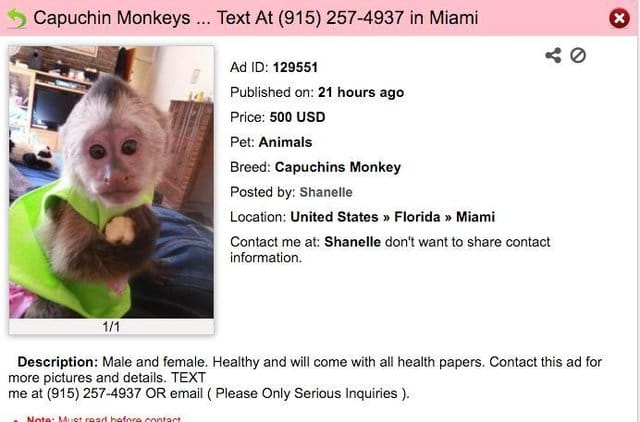 Nothing could be further from the truth, as the report on the study says:

Despite claims made by exotic animal breeders, not one of these animals is “tame.” On the contrary, regardless of how they were bred and raised in captivity, they retain their wild instincts and potentially aggressive behaviors.

The treatment of these animals have leads to thousands of people being hurt, or even killed, every year. The animals themselves don't fare much better, and often end up in roadside zoos, abandoned to fend for themselves, or even dead once they are no longer small and docile enough to handle. 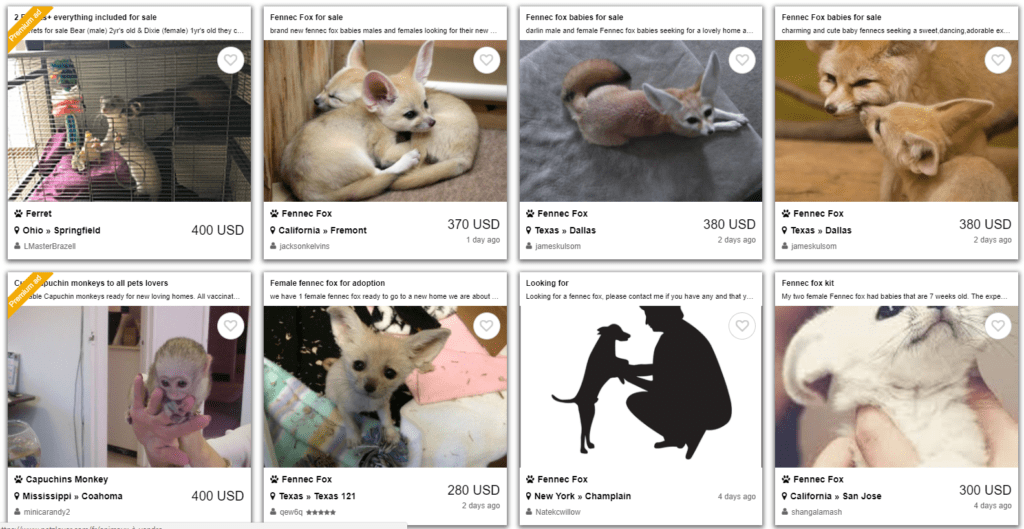 The fact is that these animals, small and large, are wild and should stay in the wild, not be kept as pets. Even tiny animals like Fennec Foxes (which are often being bought for children) are quickly found to make awful pets, as they are nocturnal, can't be house trained and do not like to be picked up.

Sadly, uninformed people can still easily buy these poor creatures as only 19 states have banned the sale of exotic animals. 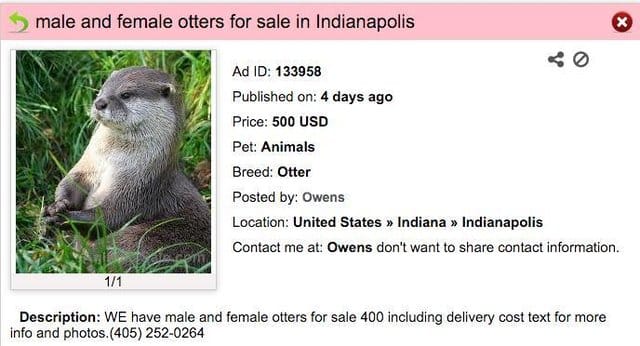 A quick search of websites which were looked at by Born Free's study (exoticanimalsforsale.net and petzlover.com) revealed that hundreds of animals were still being sold, including Kangaroos, Chimpanzees, and Tiger cubs – all of which have been proven to be unpredictable and even aggressive when kept as pets by humans. 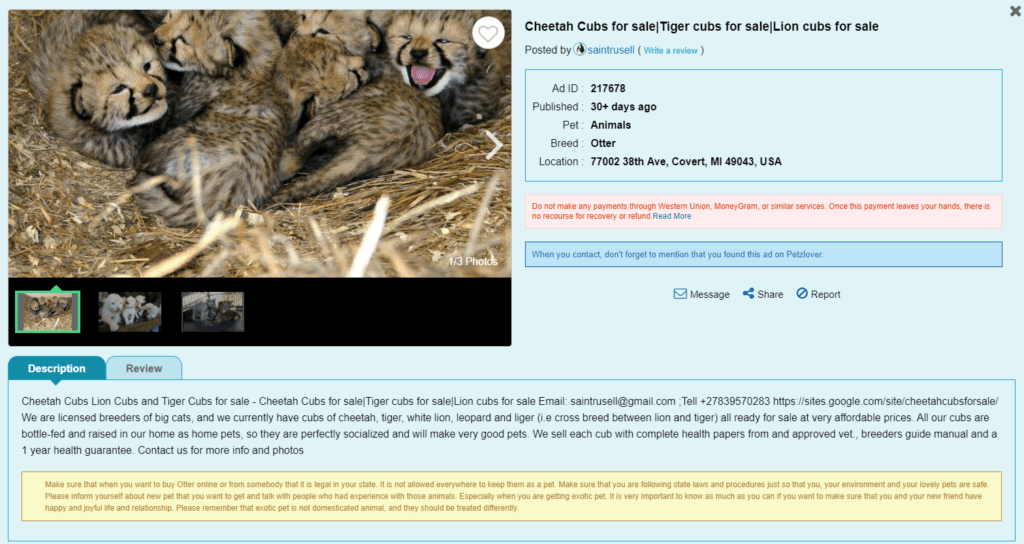 The Born Free foundation is now urging the public to support laws which stop exotic animals being sold. They have written templates that you can send to your state representative to make your voice heard in the fight for animal rights.

And, of course, they urge you to never buy an exotic pet and to tell your family and friends to follow your lead.

Wild animals belong in the wild, not trapped in misery inside a cage for human entertainment.