Max's job is to pull tourists around on a cart through Central Park in New York City. But last Tuesday, the horse experienced a horrible tumble. He was breathing very heavily, started slowing down and then stumbled and fell down on the tar, trying to get up again but failing. A passer-by took photographs of the large horse lying on the ground, immobile. 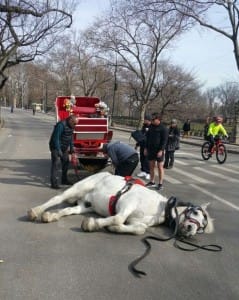 These photos then made their way to NYCLASS, an organization that campaigns for the ban of cart horses in the city. The driver of the cart, Chris Emanus, spoke out in defense of his actions when the photos went viral and people started criticizing him on the internet. He told Daily News New York:

He tripped. His foot got stuck on a little crack on the pavement. He went down. That happens all the time with horses. With new shoes, sometimes they’re not comfortable.

NYCLASS believes that the cause of Max's fall is the fact that he is forced to work in the city every day of his life, pulling around heavy carts that cause many health problems. Spokesperson John Collins said:

Horses don’t just collapse. Something happened — and the city should get to the bottom of it and make sure it never happens again. They should conduct an immediate investigation into the health and whereabouts of this horse, including allowing an independent vet to examine the animal. 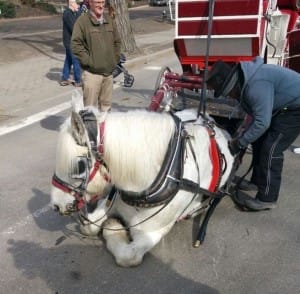 NYCLASS is not the only organization fighting to free the NYC cart horses from their personal nightmare. The  Humane Society of the United States is also campaigning to ban this type of tourism. Marty Irby, senior advisor at HSUS, told The Dodo:

In the wake […] of Max's alleged collapse and the dozens of other documented calamities over the years involving carriage horses on crowded streets, the HSUS reiterates our support to finally bring an end to the abuses within the carriage horse industry. 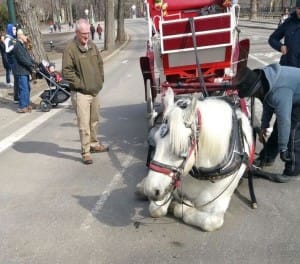 These horses in New York being used to attract tourists can be likened to dancing monkeys, elephant rides or zoos. Animals do not belong in a city and they definitely should not be made to entertain humans at the expense of their health, comfort or welfare. The HSUS continued:

Our modern day society should not tolerate animal abuse on any level, much less, for entertainment. This isn't ancient Rome — it's 2017. The City of New York should continue to lead efforts that would end the harm and use of carriage horses when more humane and modern options exist. 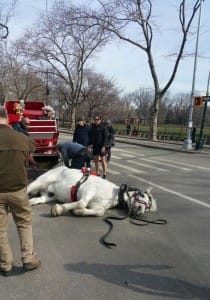 There are approximately 220 horses pulling tourists in carts in the city, and they work an average of nine hours per day, seven days a week. They travel between one and two miles of their journey in the middle of rush hour traffic among car fumes and exhausts.  NYCLASS urges any New Yorkers or tourists in the city to send them [info@nyclass.org] photos and videos of horses being mistreated or collapsing from fatigue, in the event that they do happen to see it. You can join the petition to ban cart horses here. 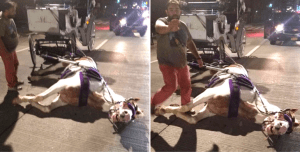