If you are not yet convinced of the absurdity of zoos, circuses, or other places of animal exhibitions, this video risks to immediately change your mind.

These shocking images reveal the behind the scenes that happens as zoos and the horrible treatment of which animals can so often be victims.

The scene happened in October during a circus at a state fair in Florida. Gandhi, a two year old tiger, is resistant to his trainer: he jostles her, making her lose her balance and fall to the ground. Everything else happens extremely quickly.

Taken aback, the employee hit the animal across the face, ordering him to sit, while another trainer rushed to help her. Upon perceiving the man – armed with a whip – enter the cage, the animal seizes the leg of the handler. To get him to let go, her colleague started hitting the tiger with all of his force, several times. 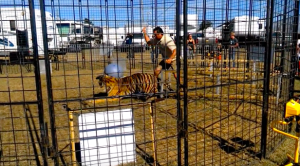 The incident was filmed by a woman present in the audience at the moment of the event. While she ordered her child to look away, we see the shock of the other spectators watching powerlessly during this violent exchange.

In the end, it was more frightening than harmful for Vicenta Pages, the trainer who escaped – miraculously – with just minor injuries. Susan Bass, the spokeswoman for the association Big Cat Rescue (BCR),  spoke to The Dodo :

He dragged her around the ring and she's lucky he didn't fatally wound her. That she was even able to stand up is amazing.

While it's normal, as a human being, to initially identify with the woman who was attacked by the tiger, seeing the animal so violently beaten across the face is equally difficult to handle. 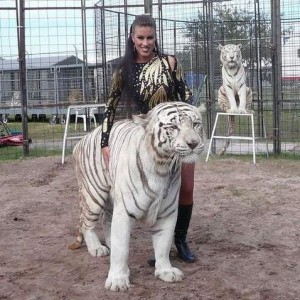 Since the release of this chilling sequence, a number of people have accused the circus – and the conditions in which the animals are treated – to be directly responsible for the incident. Rachel Matthews, associate director for the association PETA, perfectly summarized the situation:

The tiger didn't go crazy. The tiger went tiger. It's never a surprise when a wild animal behaves like that. 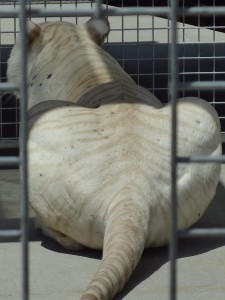 If the handlers succeed at rendering the tigers or lions docile and disciplined, it is impossible to totally erase the savage instinct in these animals. Therefore, as soon as the trainer was on the ground, Gandhi saw her in another light: in a few seconds, she passed from "master" to prey.

Certain specialists of animal behavior confirm that it is not even certain that the tiger reacted with the intention of hurting her. Being very young, it is possible that he believed it was a game; but his strength could have turned these events fatal in no time. 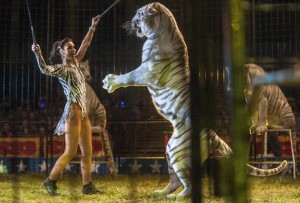 It's because the animals can't completely rid themselves of their predatory instincts that zoo personnel inevitably uses cruel methods (here the whip) to exert daily control over them. To train a lion or a tiger, they need to use fear tactics.

A sad reality decried by animal activists, who insist on the fact that often circus and zoo professionals abuse, for issues or time and efficiency, these cruel methods of teaching. 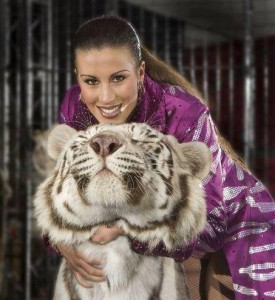 Even when that wouldn't be the case, daily life for circus animals is deplorable: when they are not exhibited or forced to do tricks in public, they are locked in tiny enclosures backstage. A way of life full of anxiety, which can sometimes push these felines to fight among themselves in their cages.

PETA has since raised complaints against the spectacle Pages White Tiger Show - where the altercation took place – for animal rights violations. An investigation is in progress. Rachel Matthews hopes that, at the least, the video will open people's eyes to the cause for circus animals and incite a boycotte against them until their shows no longer contain animals. She confirms:

As long as places like the Pensacola State Fair continue to hire animal shows attacks like this are going to continue to happen. Life in a steel cage when you're always flinching away from a whip is no life at all for a tiger. 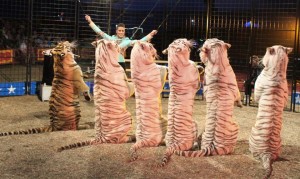 If you would like to contribute to helping tigers like Gandhi escape this life of misery, you can donate to the organizations Big Cat Rescue and Performing Animal Welfare Society, who both work to offer exploited, wild animals better living conditions.