Petunia was a lonely street dog living on scraps from passers-by in her favourite park.

A rescue organization in Los Angeles, Hope for Paws, caught wind of the story and decided to go out looking for her, reports The Dodo. They found her in a parking lot, where she immediately bolted and hid under a truck, terrified of her rescuers. 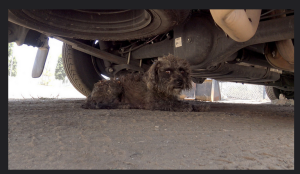 Eldad Hagar, founder of Hope for Paws, climbed under the truck after the trembling pup. She seemed nervous at first and wanted to run away…

That's when Eldad grabbed her leg tightly. It would be a few seconds of discomfort for the lifetime of joy he could provide if Petunia would allow Eldad to save her. 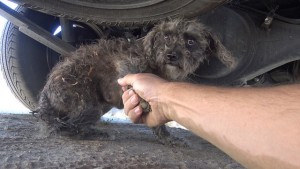 It must be noted that grabbing an unhappy dog's leg is normally a dangerous move, but as Hagar is very experienced in working with stray animals, he managed to pull her out and onto his lap.

She was now safe in the arms of her rescuer. 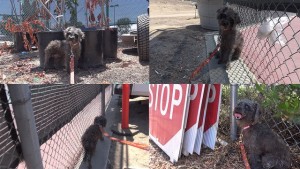 But the adventure didn't end there – the rescuers suddenly realised why Petunia had been so reluctant to be rescued… She was a new mom!

Hagar and his team noticed she was lactating and knew the puppies were nearby, and set out to look for them.

They found one not far away on a pile of leaves: a 3-day old little miracle they named Petals. Petunia was immediately more calm when they brought Petals to her. 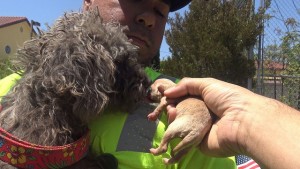 Hagar continued to search for more puppies using an old trick and playing recordings of puppy cries so that Petunia would feel maternal. She kept leading him back to Petals, which proved there was only one. 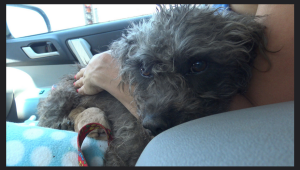 After a thorough checkup at the vet, Petunia was declared healthy and her puppy Petals too. 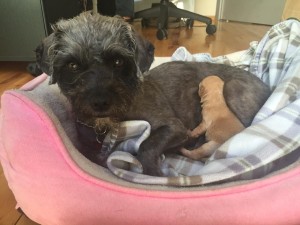 Each day the mother-daughter pair seems happier, stronger and more comfortable. They are almost ready to find their forever homes.

In the meantime, they are being taken care of by Hagar's colleague, Lisa Arturo. She posts updates of Petunia and Petals on her Facebook page, like this adorable video of their progress: