On Friday January 12, at the High Court of Carcassonne, a young woman was tried for abandoning three dogs after adopting them. The woman, aged 33 and known only as Nathalie, did not attend the trial. 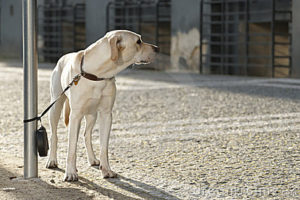 As reported by 20 Minutes, a French newspaper, the thirty-year-old – who has many dogs, cats and parrots – was tried for  “the wilful abandonment of a domestic animal” after being accused of leaving three dogs tied to a pole between the 5th December 2014 and the 19th June 2016.

Throughout these 18 months, Nathalie allegedly adopted dogs she found online only to later abandon them, finding herself incapable of caring for the animals.

In custody, the accused admitted the charges and explained that she was unable to stop herself from taking on pets, and often searched them out on “Leboncoin”  [a French site similar to Craigslist]. After finding herself unable to care for the animals, she left them tied to a pole in the hope that someone would be able to care for them better than herself…

Alerted by volunteers of the organisation Les vagabonds du Lauragais ('The Tramps of Lauragais' in French), the Société Protectrice des Animaux, or SPA (a French organisation similar to the RSPCA or ASPCA) immediately launched a civil case.

I understand that she was trying to fill an emotional void when she adopted these animals, however abandoning an animal is a very cowardly act. What is more, she attached them to a pole and left them to die of hunger… I am seeking €2000 [roughly £7550] in damages and compensation.

These crimes, which were carried out as a result of “compulsions”, were acknowledged by the jury, who gave a guilty verdict.