Fu Rui was less than a month old when he was found abandoned by the side of the road, severely injured by a horrendous incident in Chengdu, China on July 17. 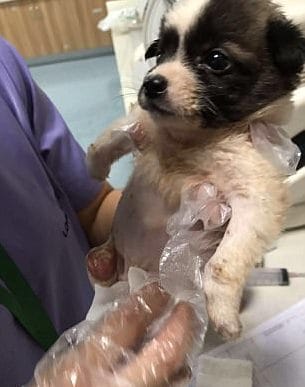 The puppy's hind legs had almost been detached from his body in either a terrible accident or act of cruelty.

The tiny canine was found crawling along the side of the road using his front legs by a volunteer from the Qiming Small Animal Protection Group, who was absolutely shocked by his condition. The animal was immediately brought to their shelter for critical medical care.

Tong Tong, a spokesperson for the rescue association described the extent of the little dog's injuries:

We don't know how the dog got injured or who attacked it, but it seemed like someone had try to rip off its legs deliberately using their hands. We are horrified by the incident and we condemn the person who has given the small puppy such shocking injuries. 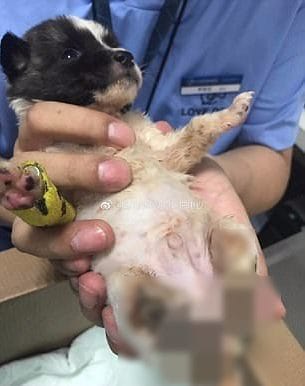 Upon arrival at the veterinary center, it was clear that the damage to Fu Rui's hind legs was severe and would not heal, so staff made the difficult decision to amputate them.

Such an important surgery on such a tiny animal is always a risk, but Fu Rui proved himself to be a fighter and absolutely determined to survive.

It was not possible to have them re-attached to its body. The dog's hind legs were dead from the ankle down and worms had started to grow on them. […] However, it was extremely strong during the operation. Its condition has stabilised now. We're giving it 24-hour care and it's recovering well. 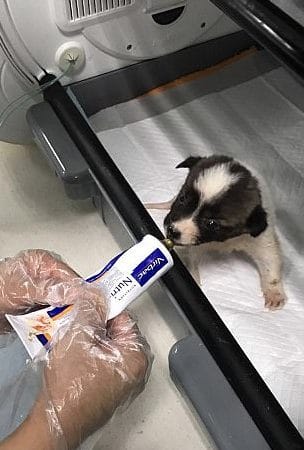 As soon as he is strong enough, the little dog will receive a wheelchair to help him to walk and allow him to live the most normal life possible.

The determined pup has already made it through so much so veterinarians have high hopes for his future.

Fu Rui was given his name after a public vote on the Chinese social media site WeChat by people who have donated to the costs for his care. The name in English translates to free. 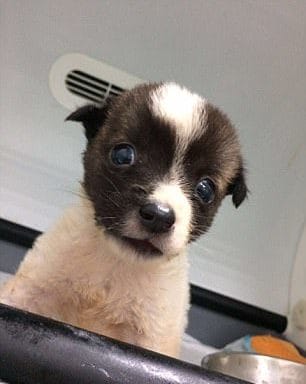 Staff from the Qiming Small Animal Protection Group are calling for animal welfare laws to be implemented in China. Ting Tong concludes:

At the moment, there is no law to protect animals' welfare in China. There is a draft under consideration, but no official legal policies have been passed.