Around 100 volunteers showed up after a call for help went up online. Andrew Reid from the Marine Animal Response Society (MARS) says he was amazed by the turn out. 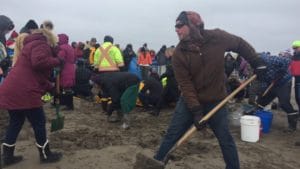 With the tide working against them, it was all hands on deck with even fire fighters getting involved. The MARS came equipped with an inflatable raft which they, along with several volunteers, used to pull the whale to a reef slightly further out. As the waters got deeper, half a dozen surfers came to take over. 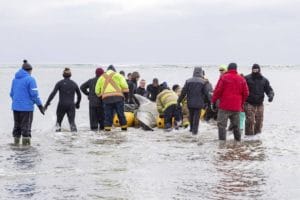 After getting stuck on sandbars a couple of times, the mammal eventually made it to the open water where it swam away and was out out of sight within minutes.

Pilot whales usually travel in family groups, so it's unclear as to why this one was found alone on a beach. Nobody knows whether he will rejoin his pod.

It’s unusual for a pilot whale to be by itself  […] they’re extremely social species so when we get single stranded animals it is always a concern there's an underlying health issue. It seemed [to have] good body mass, [to be] breathing good, [have] good reflexes so it seemed like an okay decision to try and re-float the animal [and] give it the best chance possible.

This isn't the first time people have come together to help one of these beautiful creatures. In September 2016, the locals of Madban, India, joined forces to save a 47 foot blue whale who had become stuck in the shallow waters.