Lilly and Pinch are two pups who used to live in South Korea and have a terrible past behind them. Their owners no longer wanted them and sent them to a slaughterhouse, reports The Dodo.

The government estimates that there are over 20 000 restaurants that serve dog meat in the country, but today the younger generations of Koreans are consuming it less and less.

Unfortunately, this improvement didn't help for Lilly and Pinch. Their owners sold them to a farm, where the living conditions are awful and where the animals are abused before being slaughtered. Kelly O'Meara, a member of the Humane Society International, an animals defence organisation, told The Dodo:

Every day is suffering on these farms because of the daily neglect they take.They're exposed to all the elements in barren metal cages. They get just enough food to get by. It's a pretty brutal environment.

Lilly and Pinch luckily won't have to endure this horrible treatment anymore, as the farm owner was occupying illegal ground and authorities forced him to close down his business. The HSI team was then able to free the 35 dogs who were held prisoner.

The duo got treated to a lovely bath and some cuddles before being sent to the U.S. alongside 31 other dogs, where they were welcomed in a shelter in North Carolina.

Once they're healthy and back on their feet after this traumatising event, they will be put up for adoption and hopefully find forever families where they will never again be abandoned or neglected.

The association HSI is doing all it can to fight against the dog meat trade in South Korea. Until now they've already managed to shut down five farms and send 525 pups to the U.S. But sadly, that's still not close to saving the 2 million dogs killed every year for their meat in Korea.

South Korea is not the only country where dog meat is consumed. Numerous Asian countries, such as China, Laos, Cambodia and Vietnam come to mind as well.

In the U.S., only Virginia, California, Hawaii, New York, Georgia, and Michigan have laws that specifically prohibit the consumption of dogs and cats.

Click here to make a donation to the Humane Society International and support their fight against the dog meat trade.

The First Shocking Images Of Yulin Festival, Where 10,000 Dogs Will Be Ruthlessly Slaughtered 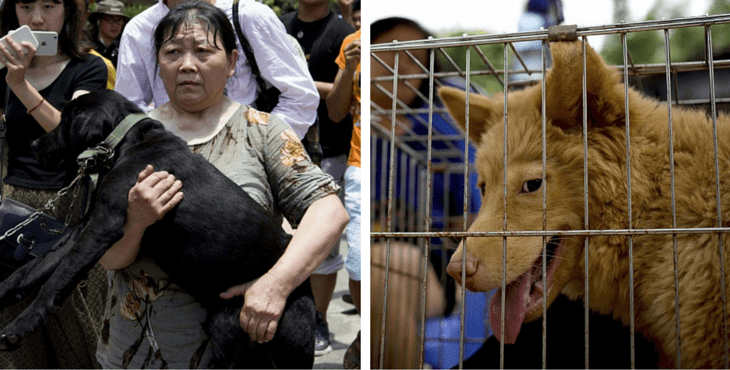