A disabled rabbit has been given a new lease of life since her devoted owner built her a bunny wheelchair. 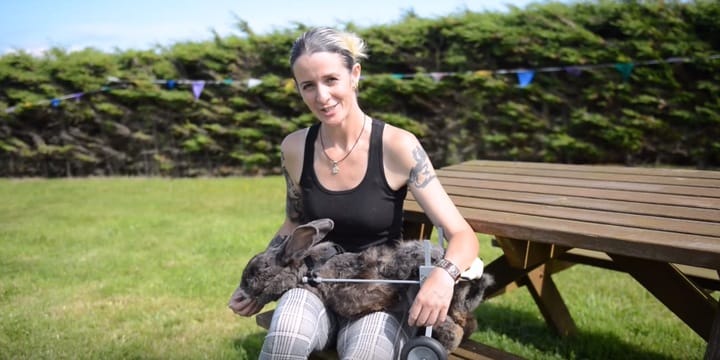 Bertha the bunny was left paralysed when her hips collapsed last May. Her owner Melanie James was advised by her vets to have the four year old bunny put down. But James ignored the vets' advice.

When the vet said the nicest thing to do would be to put her down, she still had so much life" said Melanie, adamant to give her bunny a second chance.

I've actually seen dogs in wheelchairs and I thought 'if it works for a dog, then why not a rabbit?'

So Melanie bought a puppy wheelchair and specially adapted it to fit Bertha. It only took Bertha two days to get used to it and now she is happily plodding along.

What's more, thrilled with Bertha's progress so far, Bertha's owner believes that "hopefully within the not too distant future she will regain mobility herself".

Even the vet was stunned by Bertha's transformation. "The vet and myself can't believe how well the chair's actually working."

Melanie, who runs an animal charity called Ani-Mel Haven in Cumbria has shown the limitless extent of animal love. We hope that her refusal to give up on her will lead to many more years ahead for Bertha.

Watch some footage of Melanie and her bubbly bunny Bertha here :