One of the oldest and largest elephants in Kenya has been killed by poachers for his tusks in the Tsavo East National Park near the Voi river. His name was Satao II and he was around 50 years old. His death comes just two days after an officer was shot and killed by poachers in an attempt to save elephants' lives.

He was one of the last remaining of his species and proudly bore the name of another famous tusker elephant who was killed in the area in 2014, who had possibly the largest tusks of any recorded elephant. Satao II is believed to have been killed with a poisoned arrow for his tusks, as he died in a hotspot for poachers where three other elephants were found dead in January. 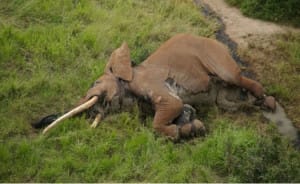 However, poachers did not have enough time to retrieve his tusks before he was found by park authorities. His body was lying near the boundary, and was spotted during a routine aerial reconnaissance of the park. Two suspects were apprehended and their weapons were seized soon after by Kenyan Wildlife Services (KWS). They were carrying an AK47, 12 poisoned arrows and 3 bows. 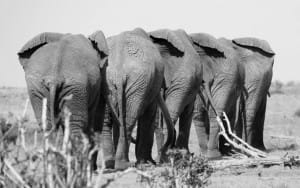 This death is another devastating blow to elephant conservation in Africa as it leaves no more than 6 tusker elephants in the country. A tusker elephant is classified as such when his tusks weigh in excess of 45kg (100lb) each. Satao 2's tusks weighed 51kg and 50,5kg respectively.

In the national park remain 6 of the 25 tuskers on the entire continent, and they have 15 emerging tuskers, which are young bulls who have the potential to develop and meet the criteria later on in life. There are also 7 cows with tusks that reach to the ground, and they are all being closely monitored by the KWS, who is fighting every day on the ground to keep these creatures safe from poachers.

The Tusker Project was launched by KWS in collaboration with a nonprofit conservation group who manages the park, the Tsavo Trust, and focuses on aerial and ground surveillance of the park. 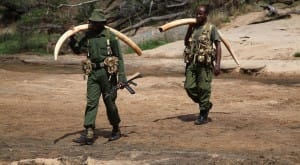 One of the most important and largest declines in the global population of African elephants has been recorded. There are currently around 450,000 elephants in the continent, which is 110,000 less than the year before. You can follow elephant poaching in recent years with an interactive map made by National Geographic.

Although this is a very sad loss in every way, we can take some positive from this in that Satao II’s carcass was indeed found with the ivory intact and recovered before it could fall into the wrong hands and further fuel the illegal ivory market. More importantly, this poaching gang that possibly tried to poach Satao II has been broken for ever. KWS acted swiftly and with support from Tsavo Trust and the informer networks in this area, the desired result was realized.

Click here to make a donation to the KWS and Tsavo Trust and help them protect the last giant elephants from poachers. They need urgently your help. 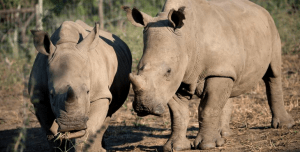