Dogs and cats are playful animals, who are not always aware of danger. If they are in the habit of wandering about in nature, they could come across snakes and subsequently be bitten, either the snake could attack them, or they could attempt to play with them.

Snake bites can quickly have serious consequences on your pet's health. It is therefore important to know how to avoid them, recognise them and treat them as quickly as possible.

1. What snakes are dangerous for my dog or cat?

The viper is the most dangerous snake for dogs and cat. They are difficult to distinguish from snakes that are harmless. 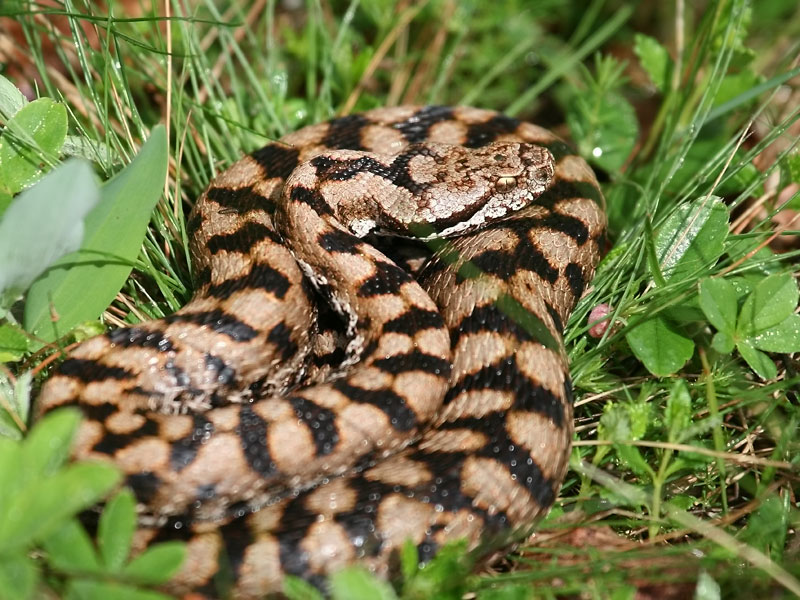 There are several types of vipers: 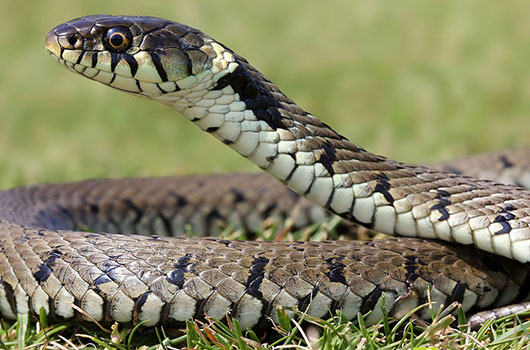 It can be hard to tell the difference between a viper and a grass snake, particularly in tall grass. Here are a few things that may help you to distinguish them:

Orvets are also different from the viper. They are smaller (30 to 50 cm) and their head is similar to that of a lizard.

Beware, it is forbidden to kill or capture a snake, no matter their species.

2. What are the symptoms of a snake bite in a dog or cat?

Vipers bites are usually at the level of a paw or the head of the animal. In fact, the viper bites only to defend itself, so it bites if you step on it by accident or if the animal tries to feel it, to hunt it or to play with it.

The bite is very painful for the animal and it's not uncommon for them to let out a scream upon being bitten. They will probably also lick the place of the wound for a long time.

About half an hour after the bite, the first symptoms will present themselves: inflammation of the infected area, redness and heat. If you have a short-haired cat or dog, you may even be able to see the bite. In case of a bite on the paw, the animal can start to limp.

If you don't bring them to the vet immediately, other symptoms may start to show themselves, such as a fever, bleeding, spots on the skin, an onset of jaundice, digestive, neurological or cardiac disorders …

A viper bite can finally cause disseminated intravascular coagulation, which is characterized by the formation of clots in the blood that cause a haemorrhage.

It's a stressful time for you, your cat and your dog. It is especially important to keep calm because stress will increase your pet's heart rate and thus accelerate the spread of venom.

Do not try to suck the venom with your mouth or a device, it is useless and you risk to contaminate yourself too. The anti-venom serum intended for humans is also indicated as potentially fatal for your pet. 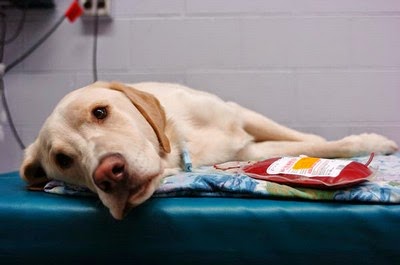 Source: I love my dog

You must immediately call your veterinarian. While waiting for the consultation, you can possibly put a cold cloth or iced bread or peas on the bite. This calms the pain and slows the spread of the venom.

You can, if your pet does not back away from you, disinfect it with an iodine solution (betadine). Above all, do not use alcohol as it thins the blood.

Only your vet has the means to treat the bite. The treatment varies depending on the size and age of your animal. It may include an infusion, anti-pain or antibiotic injections, blood transfusion and further examinations.

4. How can I stop my cat or dog from being bitten by a snake in the first place?

It is difficult to constantly monitor a cat or a dog when it is in the garden. If you live in a region particularly affected by the presence of vipers, know that hens and hedgehogs hunt snakes.

During walks, you can stomp your feet or with a stick on the ground: the vibrations will scare snakes. Also make sure your dog does not stray too far from the paths.

If you spot a viper, do not approach it. They are dangerous for humans too and are capable of biting twice consecutively.