In December 2010, a scene of unimaginable cruelty took place in the small Borneo village of Peniraman.

A starving female orangutan whose life had been torn apart by deforestation for the manufacture of palm oil came far too close to humans, reports The Dodo, with tragic consequences.

She had travelled to the village looking for food, her baby clinging to her. But upon arrival, she was confronted with the cruel hostility of the locals, who began throwing rocks at her before hitting her with sticks. A male orangutan tried to intervene but the villagers quickly chased him away and continued their savagery. 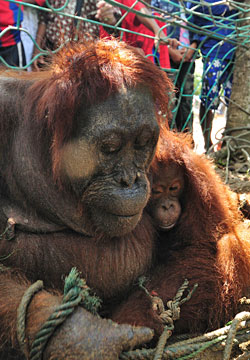 They tied the mother down before snatching her baby from her, nearly drowning her in a pool as she desperately tried to get her child back. They finally threw the unconscious orangutan in a cage along with her baby. International Animal Rescue (IAR) explains:

A large crowd of people gathered around the cage and took amusement in their suffering. The mother used what strength she had left to wrap her arms around her terrified baby while her infant desperately tried to chew through the ropes still tied to her mother's arms and legs.

IAR veterinarian Anita finally arrived on the scene. She managed to intervene and put an end to the orangutan's long ordeal. She did everything she could to save the two animals, but tragically the mother died from oedema and a haemorrhage of the lungs. The only survivor was the little baby, Peni, who was taken to one of the IAR rescue shelters where she was looked after for four years until she could be released back into the wild.

Peni went back into the wild in autumn 2015 after an official ceremony attended by the local government and members of the IAR. She is now living a life of peace with two other former boarders at the centre, under careful monitoring from the organisation. 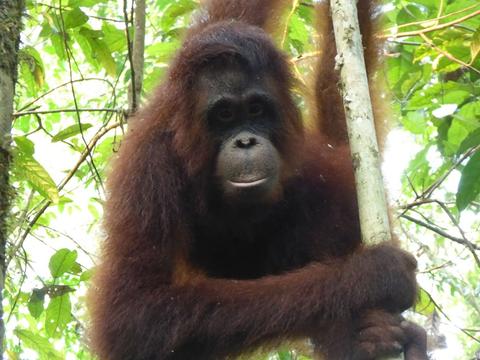 Though Peni's tragic beginning ended on a happy note, this is no reason to forget the precarious situation for the orangutans of Borneo and Sumatra. These two species have now been placed on the International Union for Conservation of Nature (IUCN)'s list of endangered species. In a report from July 8 2016, they raised the alarm: the Borneo orangutan is now on the very brink of going extinct.

Chased out of their natural habitat by increasing human activity and threatened by poachers, these great creatures are at risk of dying out. The population of Sumatra and Borneo orangutans has dramatically declined over the past 75 years. 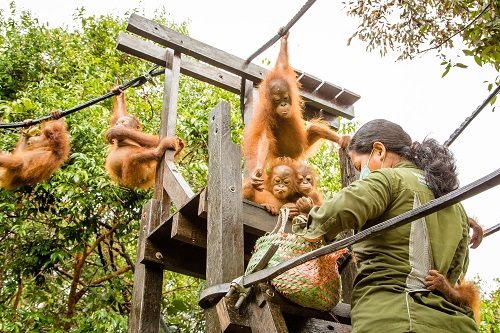 There are many organisations fighting for the survival of the "man of the forest" – the literal translation of the Malay word orang hutan. You can help support the International Animal Rescue's work by making a donation here.