Two men in Queensland, Australia documented an act of animal cruelty and uploaded it onto social media in the beginning of November.

They decided it would be fun to "surf" a beached turtle and take a picture. They are now facing the wrath of the internet – but might also face a large fine, up to $20 000. The photo, posted by Ricky Rogers, was shared more than 14 000 times and received thousands of outraged comments. He has since made his Facebook account private.

Authorities are investigating the incident under the Nature Conservation Act, and the RSPCA and Biosecurity Queensland would get involved if there is any information that the turtle was harmed. 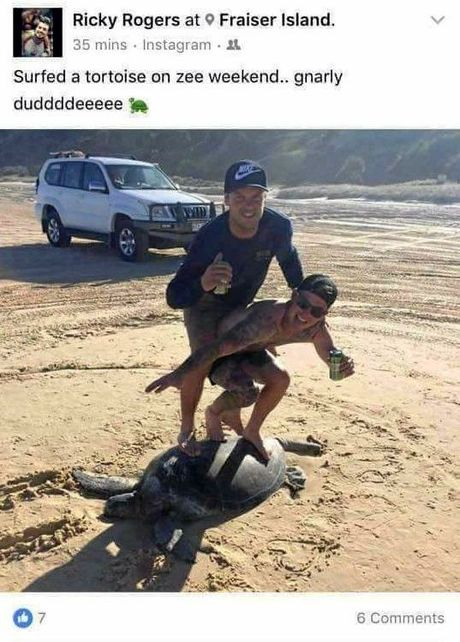 The picture, in which the two men are drinking and standing on top of the turtle's shell, was uploaded with the caption "Surfed a tortoise on zee weekend.. gnarly duddddeeeee (sic)", which misnamed the animal. One user, who wished to remain anonymous, saw the post and decided to share it in the hope of shaming the two men and getting the incident around to authorities.

But he did not expect the share to gain as much traction as it did. He said:

I thought to share it because I'm big into conservation. It's…when people do stupid things with animals, and half the time they just get a slap on the wrist.

It is legal to approach a turtle on the beach but not to harm him, and the investigations that are underway will give reveal more information.

The important thing to take from this story is that social media can be helpful in spreading the word about animal cruelty incidents.

Peta commented on the incident, saying that animals are not props for selfies – hurting innocent animals is not worth a few likes or shares on social media.

The animal rights organisation calls on readers to stop following, sharing and encouraging people like this in order to stop the trend of ignorance.