In February 2018, Attila, an eight-month-old Amstaff puppy suffered a brutal death: after months of beating her with his feet, fists or a hammer, her owner threw her from the 3rd floor window of his building in Neuilly-sur-Marne, Paris. The puppy sadly didn't survive her injuries and her owner, aged 19, was sentenced in mid-May.

"Attila died from a massive haemorrhage"

Attila lived with her owner, the owner's partner and her dog. The two dogs were often abused and underfed. Attila had even been taken in for a few days by a friend of the couple, in order to "protect" her, because he feared for the little dog's life. 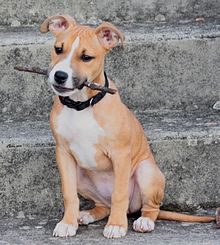 On that day, her owner hit Attila a final time and threw her out the window of his accommodation. Lawyers for the 30 Million d'Amis Foundation (animal welfare charity in France), said:

Witnesses who were outside heard the blows and the dog screaming in pain. Attila died from a massive haemorrhage due to her spleen and kidney bursting from a violent impact by a kick or an object.

The other dog in the household, aged two years old, seems to have had an equally difficult life. After a veterinary examination, it was discovered that she had scars of wounds due to bites on the ears and legs, meaning she probably would have been in dogfights.

Upon facing judgement in court, the young man appeared to show no remorse. According to his version of events, dealers were in fact the cause of the Amstaff's death.

However, a text message sent by his partner to his mother proves that he is the person who killed the puppy.

He threw her out the window, she was already in a bad state before.

The maximum prison sentence for "cruelty towards an animal" was imposed on the young man. He was sentenced two years in prison and has a definitive ban on keeping an animal.

The other dog has been placed in foster care and her owner will also face judgement before the end of 2018.

For the 30 Million d'Amis Foundation, this application of the maximum penalty is a victory. As its President, Reha Huttin explains:

Each year, the 30 Million Friends Foundation is a civil party in 250 cases. And among all these trials, we can see that magistrates apply sentences with much more audacity!

If you would like to help the foundation to continue their hard work, you can make a donation here.