Lily, a 12-year-old black Asian bear, spent ten years – almost all her life – in a small cage at the Deer Haven Mini Zoo in Miami, Florida, reports The Dodo.

Locked in this small, confined space, Lily never got any exercise. She was fed maize and never had the opportunity to eat what her digestive system was built for – fruit, insects and nuts. This combination caused terrible health consequences. Lily became morbidly obese.

Brittany Peers, a member of the association PETA, explained:

She could take no more than a few steps in either direction — she was so obese that her stomach dragged on the floor of where she was kept.

Her enclosure was covered in dirt and excrements and the bear could not lie down without covering herself in it.

Slowly but surely, visitors to the zoo started noticing her terrible living conditions and started taking photographs to alert associations. As soon as PETA caught wind of what was happening, their members decided to act.

Lily's story was widely shared on the internet and the zoo started receiving messages of protest. Faced with a wave of criticism, the managers voluntarily released the animal. In November 2016, a team of volunteers from PETA and the association Wild Animal Sanctuary (WAS), from Colorado, went to remove the bear from her tiny enclosure.

Her new home, at WAS, gave the bear a feeling of a more natural environment and she adapted quickly. Pat Craig, the founder of the sanctuary, said:

She settled in really well — she didn't seem too upset by the move or anything else. She seems really happy.

And, for the first time in her life, Lily was able to hibernate through winter, a natural activity that she was unable to do in the zoo which did not have the proper resources to meet her basic needs. Peter said that her being unable to hibernate also had severely negative consequences on her health.

We get bears all the time who have never hibernated before, and you can just tell that they're not as robust in terms of health. [Hibernation] seems to help their whole metabolism and the way their digestive system works.

Hibernation would also help Lily to regulate her weight; a very important step in recovering. Hopefully, the bear will soon lose a few pounds and be able to walk again when she wakes up for spring.

You can support the Wild Animal Sanctuary by making a donation here.

While Lily may have a happy ending to her captivity story, millions of animals are still stuck in cages, enclosures or buildings every day. 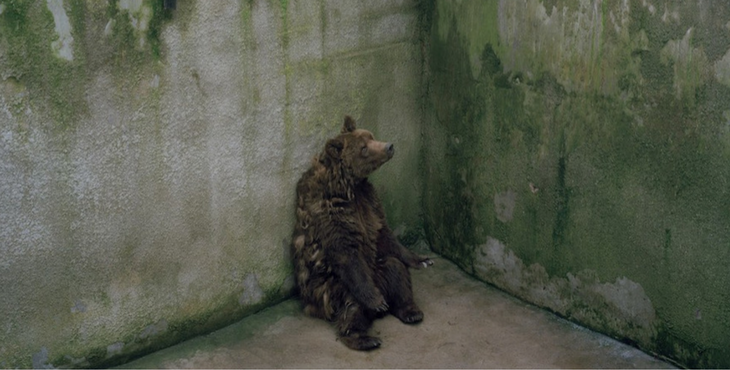