A scandal has broken that threatens to sully the image of the paradise island, Mauritius, which has for years attracted millions of tourists to the crystal clear waters and white beaches. At the end of October, the associations PETA (People for the ethical treatment of animals) and International Animal Rescue (IAR) shared a shocking video revealing the cruel methods in which street dogs are slaughtered by the authorities.

The images, captured by hidden cameras in September, show stray dogs caught by the Mauritian Society for Animal Welfare, a public government department. They are then taken to a kennel in Port Louis, the capital, to be put to death without ceremony and in plain sight of their fellow strays. 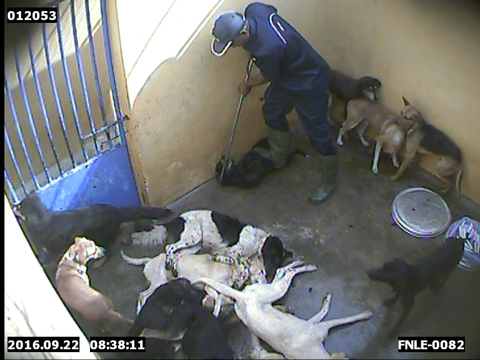 The scene is brutal and send shivers down the spine. In a small confinement, holding around 20 dogs, an employee is seen holding the pups down with an electric rod while another administers lethal injections right into their hearts. The animals try to resist, terrified. The dogs bark, cry and yelp in distress before collapsing heavily. Next to the corpses, other dogs, still alive, try desperately to escape the small cell by climbing up the gate, in vain.

After Peta and the IAR's campaigns, several veterinarians confirmed that these methods cause great suffering to the dogs who are victims, and that the lethal injections should only be administered after anesthesia.

Anyone with a trace of humanity will find this footage unbearable to watch. It is chilling to observe the callous indifference of the dog killers towards their victims. Mauritius promotes itself as a paradise island for international holidaymakers, but instead it is a veritable hell on earth for dogs.

The organisations are also encouraging authorities to change their methods and the replace these cruel dog massacres with sterilisation alternatives. "The only civilized and efficient way to fight against dog overpopulation is to prevent new puppies from being born by putting into place a sterilization program. And this is precisely what we're calling on the Mauritian government to do.", said Elisa Allen, joint director of Peta.

The IAR launched a petition on Change.org,  addressing Mauritian authorities and asking that they put an end to this violent practice. More than 135 000 people have already added their voices. You can add yours by clicking here.