There's no bond quite like that between a pet and its parent.

When Nancy Cowen was put in the Bramley House nursing home in Westcott, England, she was heartbroken to bid farewell to her adorable cat, Cleo.

She had to hand over the little kitty, who had been adopted as a stray eight years earlier, to a neighbour who would look after her.

But for this gorgeous grey-and-white cat, it wasn't the end. 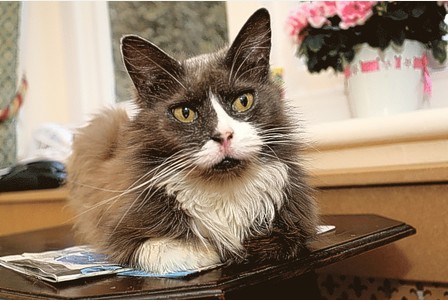 Just two weeks after Cowen arrived at the nursing home, staff noticed that a rather affectionate cat was hanging around outside, reports the Dorking Advertiser. She was sleeping just in front of the home and looking through the windows, as if she was looking for something.

Since the kitty showed no signs of going anywhere, the staff began to feed her. And it helped that she is seriously adorable!

When Nancy saw the cat for the first time, she recognised her, but couldn't be completely sure. However, there was something strikingly different about Cleo: she was missing a significant part of her tail.

The staff checked, and surprise surprise, this cat was missing part of her tail too! It was obvious that it was Cleo who had arrived at the nursing home. 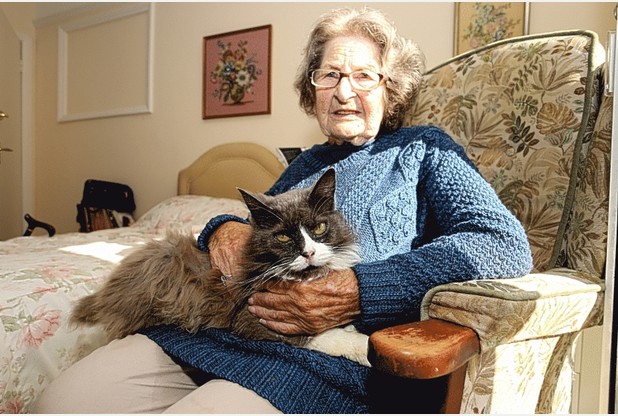 It's an incredible story of a cat's devotion to its owner. Laura Costello, from Bramley House, tells The Dodo:

I think it is just amazing that Cleo found Nancy…Very strange. I don't know how Cleo found her. It still baffles me. It's really, really weird.

Nobody can work out how Cleo managed to track Nancy down, especially since the nursing home is so far from Nancy's previous home and there's no way she could have followed her.

Luckily, the staff at Bramley House have decided to let Cleo stay. Cat and parent have been inseparable ever since!

It's always so refreshing for us at The Holidog Times to hear heartwarming stories like this one. Leslie Thomas from Bramley House puts it best when she says: "There are a lot of bad stories in the world, but this is a nice one."