On Thursday April 26, a man threw one of his cats out the window of his second floor apartment in Roubaix, northern France.

The animal died shortly after from its injuries.

The cat was a moggy or alley cat living with its owners and several other cats, some of which were purebred.

The cats had been fighting among themselves and their owner was failing to separate them.

The moggy had been fighting with a purebred Persian cat, which according to the owner was a "beautiful and very valuable" animal. 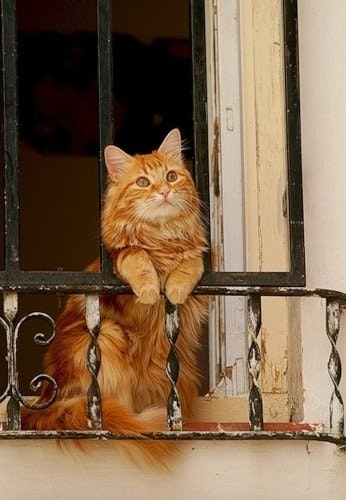 The man initially tried to shut his pet in the bathroom, and then moved  it onto the balcony.

The cat was still behaving angrily and seemed determined to continue attacking the Persian.

The cats' owner expressed his irritation (in French) at the situation to his partner, who suggested a radical solution, as reported by French newspaper La Voix du Nord:

I'd had enough. My partner told me ""throw him out", so I threw him out.

The cat didn't survive the fall from the second floor balcony, and its owner was immeditately charged with its death. This was not the first time that he had been in trouble with the law; the cat's death is the 33rd entry on his criminal record.

The man expressed some regret over the incident:

I lost my temper but now I'm very upset.

However, the prosecutor said that "such violent urges" were worrying.

The prosecution asked for a six month prison sentence, but the man was condemned to one month in prison and a four month suspended sentence for a previous crime.

His partner was exonerated and will not face trial.