UPDATED 09/26: The Guggenheim has now decided to remove both Dogs That Cannot Touch Each Other and Theater of the World, as well as another video involving pigs from the exhibition, citing safety concerns for staff.

On September 21, the world-famous Guggenheim, an art gallery and museum in New York City, was forced to release a statement after a video appearing in one of their exhibitions caused a wave of controversy online.

The exhibition, Art and China after 1989: Theater of the World, will open next week on October 6 and showcase 150 works of modern Chinese art. The backlash, however, is mainly centered around only one of these pieces; Dogs That Cannot Touch Each Other, by artists Sun Yuang and Peng Yu. 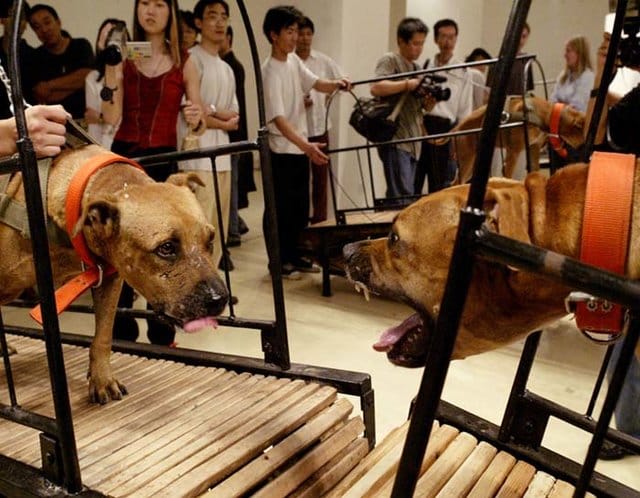 The video shows a 7 minute clip of a live performance piece which took place in Beijing in 2003. In it, 4 pairs of Pit Bulls are harnessed, facing each other on treadmills. Although they try to charge at each other and fight, they can't because of the restraints and the fact that they can't move forwards.

Although the artists maintain that the dogs were never abused (they said that since the dogs were "naturally pugnacious" that it was more a kind of sport for them), thousands of commentators, as well as spokespeople for several animal rights groups, have spoken out against the work being displayed. 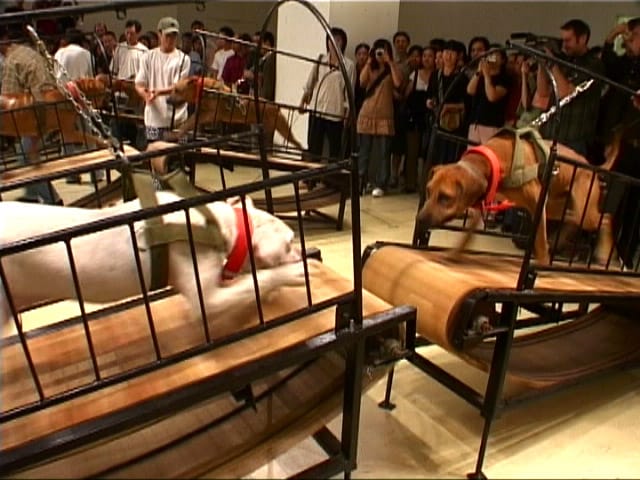 Some of the dogs seem to have visible scars and are described as "fighting dogs", prompting criticism that the Guggenheim is endorsing work that echos dog fighting. Others have pointed out how the dogs drive themselves to exhaustion simply for the sake of 'art', and that showing the video is giving a green light to animal abuse in the art world.

"Practices directly associated with this illegal activity should never be showcased unless with the explicit intention of eradicating dogfighting from our culture," said Pamela Reid, vice-president of the anti-cruelty department at the ASPCA, to The Dodo website. She also stated that works where animals are intentionally distressed are not tolerated by the society. 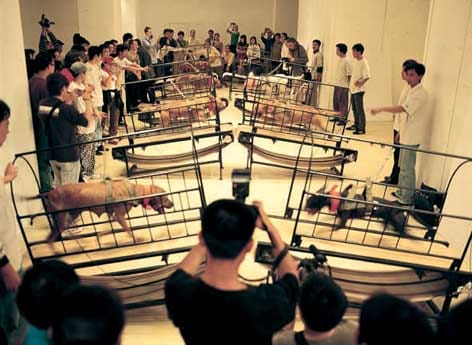 A petition calling for the video to be removed from the exhibition has collected 428,145 signatures at this time, as well as thousands of comments voicing their outrage. One commenter, June Wilson, said:

Abuse and cruelty is NOT art […] Animals are not put on earth for people to profit from or use for entertainment. The world is watching what you do.

The signature exhibit, Huang Yong Ping’s Theater of the World, has added to the controversy as it contains live reptiles and insects inside a replica tortoise shell, who will live inside the confined space for the duration of the exhibition and probably fight and eat each other in front of the watching public. A New York pet shop will replace animals who are killed or die of fatigue. 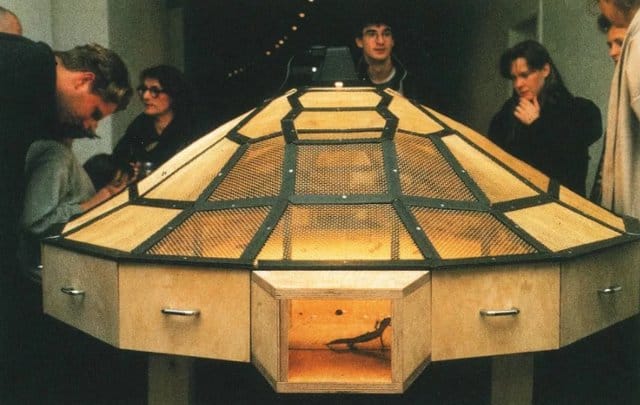 Ashley Mauceri, law enforcement outreach director for the Humane Society of the United States, has also condemned the exhibition:

With the plethora of talented artists in the U.S. and beyond, it is a shame that the Guggenheim intends to highlight one exhibit that glorifies a practice associated with dogfighting and another that features animal suffering — all for the sake of shock value. The animals being used in this 'artwork' all deserve better.

Despite the controversy, the Guggenheim's statement announced that Dogs That Cannot Touch Each Other will still be shown:

We recognize that the work may be upsetting. The curators of the exhibition hope that viewers will consider why the artists produced it and what they may be saying about the social conditions of globalization and the complex nature of the world we share. 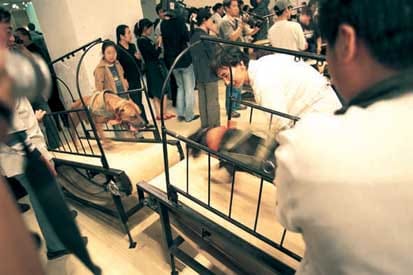 These artists aren't the first to gain notoriety for how they use animals in their work. Jan Fabre sparked outrage after hanging dog corpses from butcher's hooks at the Hermitage in Russia in October 2016, while Marco Evaristti put goldfish in blenders and allowed the public to kill them in 2000.

If you would like to sign the petition asking the Guggenheim to remove Dogs That Cannot Touch Each Other and Theater Of The World, click here.