A leghold trap is a cruel device has steel teeth that clamp down on the paw or foot of any animal that is unfortunate enough to cross its path. Countless animals die in these traps, and as sad as that is, they are probably better off than the animals who are left alive with the clamp still on their legs, causing immeasurable pain and suffering.

In this instance, the horror caused such a scandal that it quickly went viral and internet users reacted indignantly. We witnessed the incredible determination of a particularly brave bald eagle. 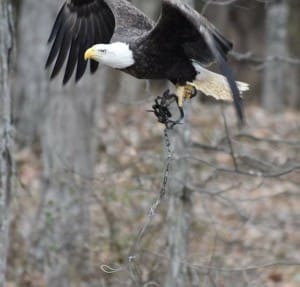 Susan Boardman and her husband went for a walk near their home in Bonneauville, Pennsylvania. They saw a bald eagle flying nearby, and with a shock they realized that the animal had a leghold trap clamped around his claw. He had miraculously escaped, but was now flying around uncomfortably.

Boardman alerted the local wildlife authorities, as the eagle flew away. In the following days, bird lovers and wildlife experts set out in search parties to look for the injured animal. 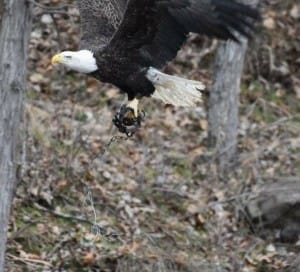 They finally found him, four days later. He was perched next to his mate with the cruel and painful trap still attached to him. Birdwatcher, Karen Lippy, told Lancaster Online:

He ignores his own issues to take care of family. He is strong. He is courageous. He is stubbornly single-minded. 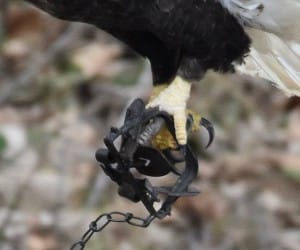 She spoke on Facebook of the eagle's bravery and talent when wildlife authorities discovered that the bird solved his own problem:

Watchers on the ground have confirmed that the eagle with the trap on its talon has managed to remove the trap. This bird has been through tremendous pain and trauma for several days.

The bird will continue to be monitored, but it is hoped that now he will be able to live in peace with his mate. 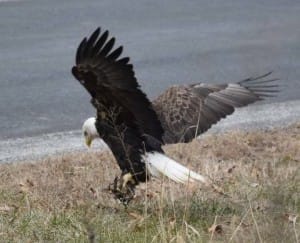 PETA also caught wind of the story and wrote on their website:

Steel-jaw traps pose a threat to ALL species—including birds, companion animals like cats and dogs, endangered animals, and even humans.

Leghold traps are so cruel that they have been banned in more than 80 countries worldwide, but not yet in the U.S. Hopefully, after this viral story, there will be enough pressure from animal rights organizations and the general public to outlaw these violent, painful and outdated traps in the U.S., too.