The Lapponian Herder is a member of the Spitz family and was used originally and exclusively for reindeer herding and as a family companion for the Sami, the indigenous people of Lapland.

Lapponian Herders are highly energetic and possess excellent stamina, although they tend to be docile in the home. They are protective of family members and bark readily, and as such, make excellent guard dogs.

History of the Lapponian Herder dog

The Lapponian Herder is one of three dog breeds that was developed by the Sami people, an indigenous group of Finno-Urgic peoples that once lived in the Arctic region which now encompasses parts of Sweden, Norway, Finland, and Russia.

The breed has been nicknamed "the reindeer herder" because of this original purpose. There was no fixed appearance for these dogs, just a general type that persisted until most of the original dogs were lost during World War II. Breeders sought to save the Lapponian Herder during the mid 1900's.

The breed  was recognised by the Finnish Kennel Club in 1945 and included dogs with longer and shorter coats. At that time, the modern Finnish Lapphund and the Lapponian Herder were still recognized as the same breed.

The Lapponian Herder was separated into its own breed October 12, 1966, as it had been noted that two different reindeer-herding breeds existed. In many regions, including its native land of Finland, the breed still herds and guards reindeer.

The Lapponian Herder is a medium sized dog that stands 17-21 inches tall and weighs between 60 and 66 pounds when fully grown. They are strong and muscular but by no means heavy.

Ears are medium in length, pricked and set rather apart. The Lapponian Herder's neck is strong and also medium in length, set smoothly into the shoulders. Their tail is averagely sized, low set and covered in profuse hair. It hangs in a loose curve, but not raised over the back. The legs are powerful and muscular and the feet are oval and covered with dense hair.

The outer coat of the Lapponian Herder is of medium length or long, straight, rather erect and harsh. The undercoat is fine and dense. The hair is often more profuse and longer on the neck, chest and on the backside of the thighs. 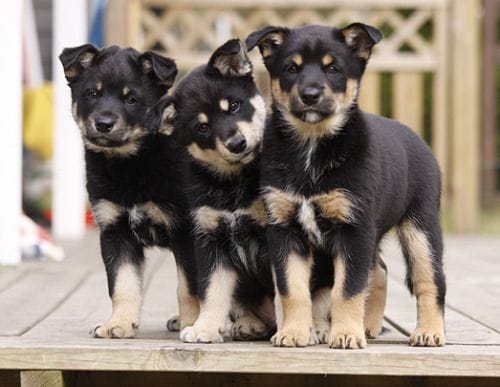 The centuries of selective breeding that went into the Lapponian Herder means that they are highly intelligent dogs. They learn very quickly and are always eager to please. Like all breeds, early socialisation is key to ensure they are well-behaved around other dogs and animals.

For the most part, the Lapponian Herder is a friendly and docile breed that does very well in families with children. These dogs are very patient and tend not to react to rough handling, though they can be a little bit reserved around strangers.

As a herder, they need constant exercise and without daily, vigorous activity, they can become destructive. However, despite this, Lapponian Herders make excellent family pets. They bark readily and can be dominant towards other dogs. Lapponian Herders are natural guard dogs and will bark in alert.

The Lapponian Herder is generally a healthy breed but, like all dogs, can be susceptible to developing certain health problems. Some of the conditions seen in this breed may include hip dysplasia, arthritis, eye problems, ear infections, skin allergies, gastric torsion, and von Willebrand disease.

The average life expectancy for the Lapponian Herder is 12 to 14 years which is on-par for other dogs of its size.

The Lapponian Herder has a thick double coat. They sheds their undercoat once or twice a year, usually in the spring and fall. Although their coat is smooth and does not tangle, occasional brushing and baths can help it stay healthy, shiny, and free of parasites.

The nails should be trimmed when needed with a nail clipper or grinder to avoid overgrowth, splitting, and cracking. Ears should be checked regularly to avoid a buildup of wax and debris, which can result in infection. Teeth should be brushed regularly.