The German Shepherd is one of the most popular breeds of dog in the world. They are very balanced dogs which adapt well to life in cities, making them an ideal dog for many families.

The German Shepherd originated in Germany in 1892, where it was named Deutscher Schäferhund. The breed was developed by Captain Max Von Stephanitz, who wanted a well-balanced dog with evenly-structured physical features.

Von Stephanitz wrote the first standards for the breed in 1899. In the same year, the first breed club was formed.

Thanks to their even temper, the German Shepherd quickly gained popularity as a working dog. They have long been used as police dogs, shepherd dogs and rescue dogs.

During World War Two, German Shepherds accompanied soldiers of all factions as watch dogs, rescue dogs and messengers. They were also used to detect gas.

Nowadays, as well as being a well-loved dg thanks to their even temper, they are archetypal work dogs, and are particularly well-known as police dogs. Thanks to their excellent sense of smell, they often work as sniffer dogs trained to detect drugs or explosives. They are also widely used in film and TV.

The German Shepherd has a wolf-like appearance, leading some to call them the Alsatian wolf dog.

The head is triangular-shaped and proporationate to the body. The forehead and skill are slightly convexed – this can be seen from above. The jaw are teeth are streamlined and well-defined, while the nose is straight and fairly narrow.

The eyes are almond-shaped and slightly slanted. They are always dark in colour. The ears are placed high on the head, exacerbating the convex shape of the head. They always stand up straight and face forwaards.

The German Shepherd has a tapered chest. Their paws are muscular and finish in curved pads with dark soles. German Shepherds have longer fur on their hind quarters.

On average male German shepherds are 60-65cm in height (from toe to wither), while the females are 55-60cm. 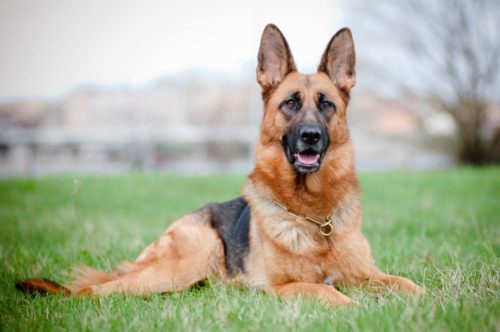 There are two kinds of German shepherd – long-haired and short-haired. In the long-haired variety the coat is dense, soft and evenly dstributed across the coat. There are longer tufts of fur on the ears and hind legs, and they have a mane around their neck. Both types of German Shepherd have an undercoat.

The short-haired German Shepherd has a tough, dense coat, which fits snugly against their skin. The coat is slightly longer around the neck and hind paws, almost like a pair of trousers.

For both varieties, the recognised colours are black with red-brown markings, brown, yellow and light grey. Makrings are usually around the face and withers. The undercoat is usually grey. White German Shepherds aren't recognised by the breed standards.

The standards of the breed dictate that the German Shepherd should be a well-balanced dog which is docile, vigilant and at ease with people.

As they have long been used as working dogs, German Shepherds are brave and have combat instincts. They therefore respond well in dangerous situations.

They are not at all shy, and are very affectionate with their owners. They are intelligent, lively and loyal. They get on very well with children and make great family dogs.

German Shepherds are incredibly robust, but sometimes develop orthopedic disorders such as dysplasia in the hip or elbow. They are also susceptible to myelopathy which causes the narrowing of the spinal cord and consequently impairs the functioning of te back legs.

Thanks to DNA testing, breeders have for some years now been working to eliminate the faulty gene which causes this disorder from the breed.

German Shepherds are very active dogs, and though they do adapt well to life in an apartment they need lots of exercise to let off steam, if not entire days spent playing outside. They are suited to canine sports and love to get involved in work outs with their owners.

The German Shepherd's coat – especially in the long-haired variety – needs brushed at least three times a week to keep it shiny and in good health. They only really need one bath a year, but this depends on the sorts of outdoor activities they are doing.