The Cesky Fousek dog is an ancient breed of hunting dog. Though it was used by people as a working dog for hundreds of years, it is a very intelligent breed which loves cuddles and affection from its owner.

Origins of the Cesky Fousek

The Cesky Fousek was a prominent breed in 15th century Bohemia (the modern-day Czech Republic). Thanks to its elegant appearance, the dog was a favourite of the noble families of the time, who used the breed for hunting.

Historical documents show that during the reign of Charles IV and Edward II, the Cesky Fousek was already known for its exceptional hunting talents and its intelligence.

The dog was already famous throughout Europe in the Renaissance period, but due to political reasons was unknown outside of the continent – despite the first breed standards being published in 1887.

During the Second World War the Cesky Fousek became gravely endangered, and as such some breeds began to cross-breed the dog. This led to the version of the breed we now see today.

The breed was officially recognised as recently as 1996.

Though it is still not very well-known outside of the Czech Republic and Slovakia, it is the second most poplar breed of dog in its country of origin, where it is still used for hunting birds and deer.

The Cesky Fousek is a medium-sized, wired-haired dog. It has a muscular body, a long face and long ears.

The head is proportionate to the body. The yes, which are almond-shaped, give the dog an intelligent and good-natured appearance. The are always dark amber or chestnut-coloured.

The muzzle is long and ends in a large black nose. They always have a whiskers and a beard. The jaw is strong and powerful; it has evolved to be so from hunting and eating small animals.

The ears are large at the base. They fall either side of the face and sit closely against the head.

The body is proportionate to the head. One quirk of the Cesky Fousek is the unusual distribution of the hair around their body. Aside from the characteristic whiskers and beard, there are also well-defined eyebrows which are angled upwards. The forehead, head and jowls are covered in short, coarse hair, but the fur on the ears is softer.

The front and back paws are proportionate to the body, and are also muscular.

The Cesky Fousek's tail is often amputated 3/5 along its length. This is another trademark of the breed; it gives the appearance of a longer back thanks to their markings. Their skin is fairly thin and, according to the breed standards, should never be brushed. 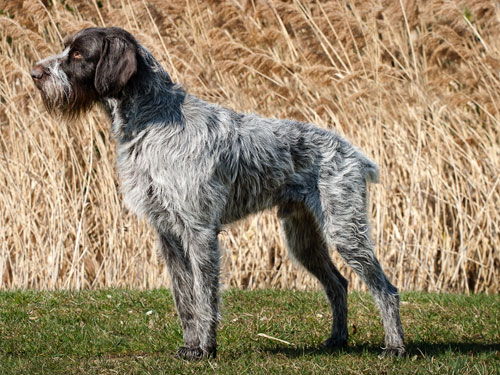 There are three aspects to a Cesky Fousek's coat:

The breed is recognised in white (with or without brown markings), brown with mixed markings on the rear or chest and brown without markings.

Having been used as a hunting dog for years, the Cesky Fousek has an inherited talent for the sport. They adapt easily to different environments, but especially love being outside where they can show off their talents. They're definitely not afraid to jump straight into any water they may come across.

Despite their natural hunting instincts, they are very easily trained thanks to their intelligence.

The Cesky Fousek is an elegant and responsive dog which can be stubborn – but they're still very cuddly. They are very affectionate with their owners and would make the perfect dog for someone very active who likes to spend lots of time outdoors.

The Ceskey Fousek is a very sturdy breed and it not prone to any genetic illnesses in particular. However they are susceptible to ear infections, so it's very important to keep an eye on their ears and make sure they are clean after any walks or swimming.

They are prone to hair loss, meaning they need regular attention in this department and visits to the vet.

Due to its delicate skin, the Cesky Fousek needs to be brushed gently every day. This keeps its coat glossy and healthy.