The Caucasian Shepherd dog, also known as the Ovtcharka meaning 'sheepdog' in Russian, is a dog that's loyal to the very core. hese dogs were bred to help shepherds in the Caucasus Mountain region keep their flocks safe from predators like wolves and bears.

History of the Caucasian Shepherd dog

The Caucasian Shepherd dog is one of the oldest living Molosser breeds and their origin still remains rather mysterious. What is known is that, as their name suggests, they hail from the Caucasus Mountain region and have been around for more than 2,000 years.

Whatever their true origin, the breed proved to be invaluable companions to the shepherds of the Caucasus region for centuries. Their fierce nature meant they guarded their flocks of sheep and owners from predators such as wolves or jackals without ever backing down.

These fearless, resilient and strong qualities were bred by the shepherds into their dogs and as a result many different variants of the breed emerged. The Caucasian Shepherd dogs that that developed in Georgia came to the breed standard that we know today.

Sometime in the 1900s, the communist USSR started using Caucasian Shepherd dogs as prisoner guards and used them to develop other breeds in army kennels. In the 1960s, East Germany put the breed to work as border patrol dogs along the Berlin Wall and when the wall came down in 1989, around 7,000 patrol dogs were dispersed, and many were given to families in Germany to live out the rest of their days.

Nowadays, most Caucasian Shepherd dogs are mostly family pets and watchdogs while a few are still used by shepherds to tend to flocks.

One of the Caucasian Shepherd's most distinctive features are their huge size. They are a powerful, athletic dog that is heavily boned in proportion to their height. Males tend to be a bit larger than females and weigh in at 110 to 220 pounds, while females average around 100 to 180 pounds.

Males are about 27 to 30 inches in height at the shoulder, and females are between 25 and 28 inches. Caucasian Shepherd Dogs are considered to be a giant breed.

The head is large, wedge-shaped, and tapers slightly to a blunt muzzle with high-set hanging ears, which may be cropped, and deep-set, oval-shaped eyes. The thick tail hangs down to the hock but may be carried above the back as a sickle-shaped hook or ring when the dog is excited or moving.  The Caucasian Shepherd's neck is short and powerful.  Their legs are well-boned and their feet are big, oval, compact and tight.

The Caucasian Shepherd dog has a double coat consisting of longer, coarse outer guard hairs and dense undercoat made up of soft, fine hair. Coat on the muzzle, forehead, and the front of the legs is short and smooth. Longer coat on the cheeks and the back-skull stands away from the body and contributes to the bear-like appearance of this breed.

In terms of length, there are three types of lengths that are accepted without preference; short, medium and long.

The Caucasian Shepherd Dog can be gray, fawn, red, cream, tan, and even solid white. Coats may also be brindle or have large patches of two or more colors. They often have white markings on the body and a dark "mask" around the face. 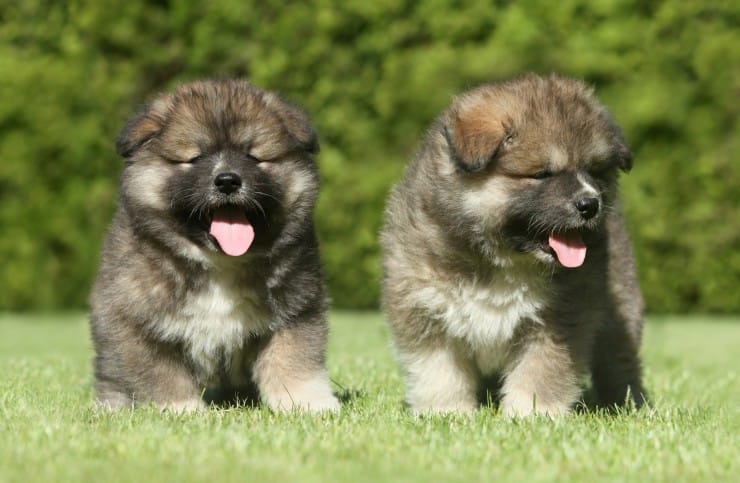 Caucasian Shepherd's make loving, loyal family dogs and fierce protectors. With this said, they are not a breed for first time owners. They can be quite stubborn and need someone who knows how to display strong leadership and can set aside the time to train and socialise them early on.

They are highly intelligent dogs that can be naturally distrustful of strangers and do not take well to dogs or other animals that they aren't familiar with. In general, they are low energy and laid back, but they are also highly territorial and never back down from a fight.

With this in mind, it is advised against leaving them alone with children, because if play becomes too rough, the Caucasian Shepherd may feel the need to protect your child, and may so extensively.

The Caucasian Shepherd dog is generally considered to be a healthy breed. However, as with most large breeds, they can be prone to hip dysplasia and cataracts. Obesity is also fairly common within the breed so they should be fed an appropriate diet, their weight should be monitored and they should be exercised regularly.

They have an average lifespan of 10-12 years which is fairly long-living for a breed of their size.

The thick coat of a Caucasian Shepherd dog should be brushed at least twice weekly to remove loose or dead hairs and prevent matting. The breed goes through a heavy shed once a year so bathing and extra brushing is recommended around this time.