The Belgian Shepherd, also known as the Malinois Shepherd is one of the four distinct types of Belgian sheepherding dogs. They are often mistaken for a German Shepherd due to their superficial resemblance to that breed.

The Malinois is smart, self-confident, sensitive and stable. The breed was first recognized by the American Kennel Club in 1911, as a member of the Miscellaneous Class.

History of the Belgian Shepherd dog

The Belgian Malinois dates back to the 1800s. They originated in the area around the city of Malines, Belgium, which is where they got their name. In 1981, one of the first short-coated Belgian Shepherds was born and was later registered with the Societe Royale Saint-Hubert.

They have long been acknowledged as a peerless livestock herder in their native land. They were first bred by serious dog people who were primarily concerned with producing dogs of sterling working character. It was this emphasis on performance that made the Malinois the go-to dog for Belgian sheepherders and cattlemen.

The breed was first brought to the USA in 1911. Like most breeds, Belgian Malinois Shepherd numbers decreased after World War II. In the sixties, the Mal's admirers began the process of replenishing their American population and the breed was introduced to the American Kennel Club's Working Group. When the Herding Group was formed in 1973, the Belgian Malinois was reclassified as a member of that Group, where it remains today.

While the Malinois originally was bred as a sheep-herding dog, its intelligence, trainability and tenacity has led these dogs to serve more often as police and military dogs, search-and-rescue dogs, service dogs and guard dogs.

The Belgian Shepherd is very similar to the German Shepherd in appearance, being a well balanced, square, medium sized dog. They are sturdy, muscular dogs, but are not heavy on their feet, and given their size are surprisingly agile, and carry themselves with pride and grace at all times.

They have deep, broad chests, long legs and round, cat-like feet. Malinois have large heads with long, tapered, but not thin, muzzles. Their eyes and noses are dark, and their ears sit high on the head and are erect and alert at all times.

The Belgian Malinois Shepherd's tail is strong at the base, of medium length and according to breed standards must never at any time form a hook or deviation. 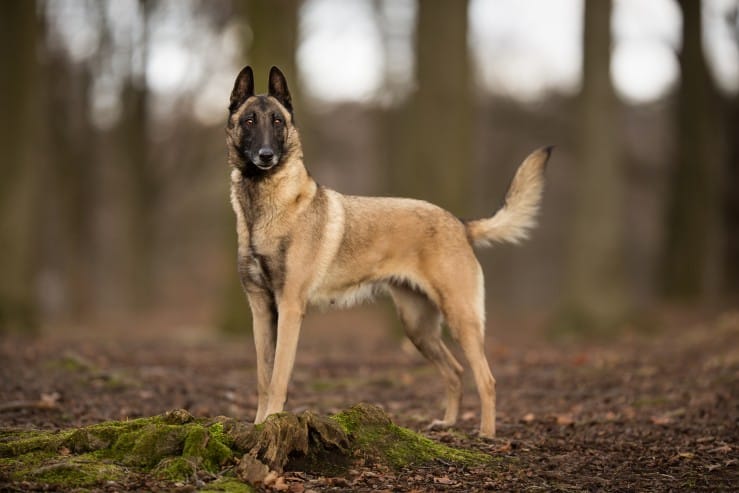 Belgian Malinois have short hair that is crisp to the touch. Their double coat is thick, with an extra dense undercoat and thick topcoat that provides protection from water and extreme weather conditions. The hair lays flat against the body and is slightly longer around the neck.

Malinois range in color from fawn to mahogany with a black mask on the face, black ears, and black tips on the hairs. Lighter colored Malinois can have a small bit of white on the tips of their toes or on the chest.

The Belgian Shepherd is a watchful and highly intelligent dog, bursting with energy, fiercely protective, and always ready to leap into action. As with all Belgian Sheepdog breeds, Malinois were bred to herd and protect livestock, so they must have constant activity, whether playing with children or going on long walks.

Their lively, alert temperament and confident nature, showing no fear or aggressiveness, should be obvious in the way they stand  and the proud attentive expression in their sparkling eyes.

Like every dog, Malinois need early socialization, exposure to many different people, sights, sounds, and experiences, when they're young.

The average life span of the Belgian Malinois Dog Breed is 10 to 14 years. This is slightly higher than the median lifespan of most purebred dogs (10 to 13 years). Like many other large dogs, they have a predisposition to developing the following health disorders.

Belgian Malinois Shepherds are fairly low maintenance in terms of grooming. Their short coats do not require much trimming  and weekly brush will suffice. They will shed profusely at the change of seasons, so Spring and Fall may require daily brushing.

The rest is basic care such as trimming their nails and regularly cleaning their teeth and ears to prevent harmful bacteria from building up and causing an infection.