The Australian Shepherd, the cowboy’s herding dog of choice, is a medium-sized worker with a keen, penetrating gaze in their eye.

The Aussie, as they're nicknamed, is happiest when they have a job to do. They can be a wonderful family companion if their intelligence and energy are channeled into dog sports or activities.

History of the Australian Shepherd dog

The dogs that became what we now know as the Australian Shepherd were chosen for their working ability, not their bloodlines, so little is known about the history of the breed.

Despite what their name may lead you to believe, the Australian Shepherd dog actually developed in the Western United States during the 19th century. The breed was used to herd livestock for ranchers and farmers.

There are many theories surrounding which breeds were used to create the Australian Shepherd. It's likely that the Aussie's ancestors include collie and shepherd-type dogs that were imported with shipments of sheep from Australia during the 1840s, hence the name.

After World War II, the breed became hugely popular along with the rise of Western-style horseback riding. Crowds at rodeos or horse shows, and audiences of western movies or TV shows, were in awe of the athletic dogs they saw working alongside the cowboys.

The Australian Shepherd Club of America was established in 1957 and is the largest single-breed registry.

Despite this interest, the breed wasn't recognized by the American Kennel Club until 1993. The AKC ranked the Australian Shepherd dog as the 17th most popular breed in the U.S. in 2016.

Their stunts and skills earned them places in several Disney films, including Run Appaloosa Run and Stub: The Greatest Cowdog in the West.

The Australian Shepherd is a medium sized dog that is slightly longer than tall. They are solidly built with a strong musculature but are by no means stocky.

The head is in proportion to the body and their overall expression is attentive, intelligent and alert. Their eyes are brown, blue, amber and can include flecks and marbling. Ears are triangular, of moderate size and set high on the head.

The Australian Shepherd's neck is medium sized and strong and the chest is not broad but deep. The tail is straight, docked or naturally bobbed and must not exceed four inches in length.

Their legs are straight and strong and their paws are oval and compact. 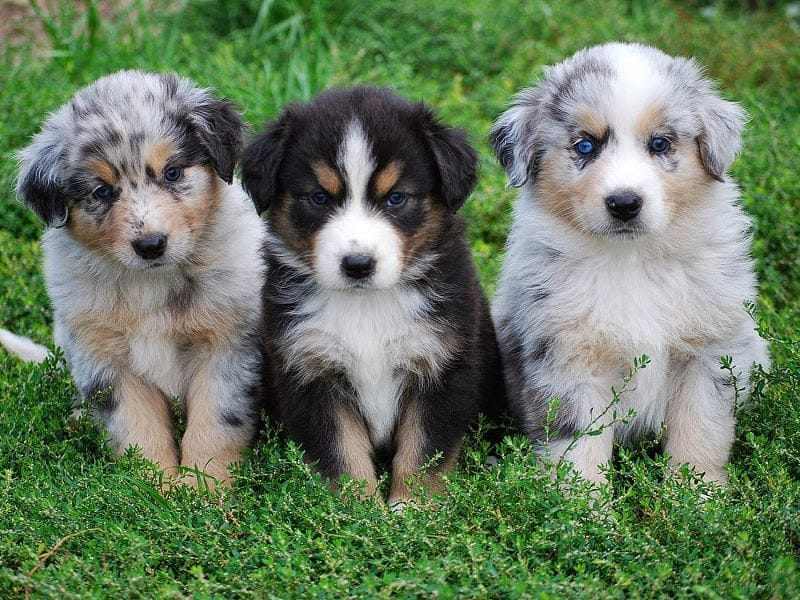 One of the Australian Shepherd's most distinctive features is their coat. The hair is of medium texture, straight to wavy, weather resistant and of medium length.

The hair is short and smooth on the head, ears, front of forelegs and below the hocks. There is a moderate mane and frill, more pronounced in males than females. The following colours are accepted within the breed standard:

The Australian Shepherd is unsurprisingly a highly energetic dog which requires a great amount of exercise and attention. They are also big on consistency. They like things to happen at the same time every day – meals, walks, bedtime. They make excellent watchdogs and will always alert you to anything or anyone out of the ordinary.

Like most herding breeds, the Australian Shepherd has an inborn protective streak and can be wary of strangers. They are not immediately friendly with every dog they meet, even with plenty of socialization. Without early and frequent socialization, the Aussie can become shy or aggressive in the presence of people they don't know.

However, the Australian Shepherd is a kind, loving, and devoted breed to those they know. They are very loyal to their owners, and are rewarding dogs if treated well.

They thrive in rural, ranch-like conditions, and need space to run and play in an urban setting. They are a high-spirited dog. Teaching them tricks keeps them focused and happy, which also keeps their minds working. The breed also has great stamina and can live in a variety of terrain. Because of this, they are popularly used as trail and working dogs.

Aussies are generally healthy dogs, and a responsible breeder will test breeding stock for health concerns such as hip dysplasia, epilepsy, cataracts and certain forms of cancer.  An Aussie’s ears should be checked regularly to remove foreign matter and avoid a buildup of wax, and their teeth should be brushed regularly.

Australian Shepherds are also one of the breeds that can be affected by Multiple Drug Sensitivity (MDS). Dogs with MDS can have fatal reactions to a number of common veterinary drugs including the common heartworm preventive ivermectin, so a screening of both them and their parents is necessary.

In general, weekly brushing sessions will keep the Australian Shepherd’s waterproof, double-layer coat looking its best. During shedding season, though, more work will be required. During this period an undercoat rake can be used every two or three days to remove the abundant dead hair, followed by a cleanup with the wire brush.

Aussies often work and/or play outdoors, so it’s not unusual for them to come in dirtier than they left. But unless they’ve gotten into a particularly messy situation, they require a bath only occasionally. As with all breeds, the Aussie‘s nails should be trimmed regularly.