The Anglo-Français de Petite Vénerie is a medium-sized breed of dog used in hunting as a scenthound and as their name would suggest, they come from France. They are one of the Anglo-French hound breeds which were created by crossing French scenthounds with English (Anglo) foxhounds.

The name Petite Vénerie does not mean that dogs of the breed are petite or small, but rather that it is used to hunt small game

The result of crossing French and English hounds was a dog with the traditional color pattern and body of an English hound, but with a head, face, and level of refinement more similar to French dogs.

Formerly known as the Petit Anglo-Francais, this dog breed was changed to its current name in 1978 before being admitted to the United Kennel Club in 1996.

The word "petite' confused American breeders who assumed that the breed was small. For this reason, many animal dealers in America have changed the breed’s name to Anglo-Francais de Moyen (Medium) Venerie.   The breed is not currently registered with the American Kennel Club, nor is it likely that will change in the near future.

The Anglo-Francais de Petite Venerie greatly ressembles a Beagle. They are medium in size with most breed members standing between 19 and 22 inches tall at the shoulder.

As a working hunting dog, they are very muscular and lean but by no means thin. Their tail is of average length and usually held in and either straight or with a slight curve.

The limbs are tall, straight, and muscular while their steady necks and broad muzzles are an indication that these dogs are surely bred for hunting purposes.

The Anglo-Francais de Petite Venerie's head is proportionate to the rest of their body, but is usually quite narrow. The muzzle is very long compared to the skull and they have a wide, black nose.

The eyes of the Anglo-Francais de Petite Venerie are large and brown and the ears of the breed are both very long and wide. All these features combined give them a soft, kind, and intelligent expression. 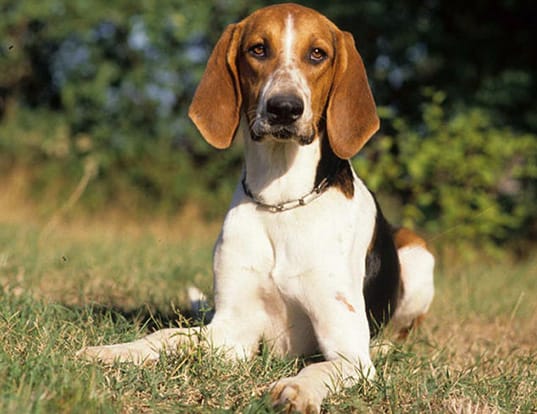 As is common with most scent-hounds, the Anglo-Francais de Petite Venerie has a short, smooth, and dense coat. The hair is usually the same length all over the body but may appear slightly shorter on the fronts of legs, feet, head, ears, and face.

Unlike most British scent-hounds, the hair on the tail of the Anglo-Francais de Petite Venerie is uniform in length and is completely devoid of a brush.

Colour-wise, the breed is found in three different colours; white and black, orange and white, and white and black with orange/tan markings. Many members of the breed have a black-saddle shaped marking commonly found on the back of English scent-hounds.

As the Anglo-Francais de Petite Venerie was bred almost exclusively to be a working pack hunter, they have a temperament that goes with this. As so few have been kept as pets, it is difficult to know what they would be like in a companion animal environment.

On the whole, they are very non-aggressive with some members being extremely outgoing and affectionate and others being more quiet and reserved.

There is not much available information on the breed’s suitability with children, but most similar breeds do very well with them if provided with proper socialization and training.

When it comes to their adaptability, Anglo-Francais de Petite Venerie are better suited to be working dogs over being kept indoors. They are therefore suited to farm settings or rural areas where there’s vast track of lands to play and exercise.

It is worth noting that the breed is not suited to everyone as they can sometimes be quite stubborn and unable to follow orders like most indoor pets do.

The Anglo-Francais de Petite Venerie is not susceptible to any particular illnesses. As the dog has been bred almost exclusively to be working dog, any potential genetic defects would have impaired its ability to do its job and consequentially been eliminated from the gene pool.

However, since this scent hound is a cross-breed between two well-known breeds, there are chances that it might suffer from several health problems that mostly affect closely related breeds. Some of these health issues include hip and elbow dysplasia, demodectic mange and cataracts.

They have an average lifespan of 12-15 years.

Their fine coat means they are a very low maintenance breed and don't need much grooming. They should never require professional grooming with a regular brush sufficing.

This breed does shed, and some individuals shed very heavily.  Although some shed less heavily, many will cover carpets, furniture, and clothing with hair.