Derby could have ended his days alone in a cage at an animal shelter in the United States. Born with a severe disability, his front legs never developed. He had become a burden to his previous owner who then decided to abandon him. 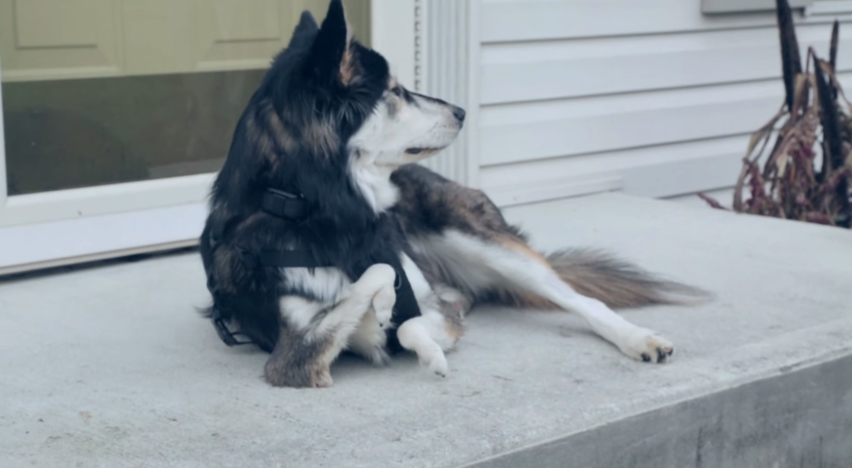 But Derby is far too sweet and special to be alone for too long. When Sherry Portanova met him at the Lorsque Sherry “Peace and Paws” shelter in New Hampshire, she fell in love. She adopted him without a second thought.

Even with his disability Derby never seems depressed. “He has always been the happiest dog that I have ever known”, says Sherry. But he has never been able to experience the joys of running and playing. And his new human felt that this wasn’t a satisfying enough life for a dog.

Luckily, one of Sherry’s relatives, Tara Anderson, is a 3D impression specialist. Moved by Derby’s plight, she accepted the challenge to do everything in her power to give him a real dog’s life.

With the help of her colleagues at 3D Systems, Tara Anderson started with the creation of a wheelchair equivalent for Derby that he adapted to quickly. He could now enjoy walks with his new family without having to be carried in their arms.

But Tara Anderson knew that she could do better. Even though he had gained mobility, he still couldn’t play with other dogs or bend down to pick up a ball.

Together with her determined team, Tara embarked on an ambitious project: to propel Derby onto real ‘paws’. Her idea? To develop a unique set of protheses adapted to Derby’s paws, all thanks to 3D printing.

After several weeks of hard work, it was time for the test.

Derby had never expected such a surprise. And nobody could even imagine how successful the result would be. Excitedly, Derby immediately took to his new prostheses and started running for the first time in his life.

“It was incredible and extremely moving” recounted Sherry. “It was amazing because he had only just got his protheses. It was emotional because he just seemed so excited to run.”

Today Derby can go on runs with his family and play with the neighbourhood dogs… In short, he makes the most of a true dog’s life.