Just like humans, cats and kittens can also become stressed. However, a stressed cat is much more likely to hide how it feels compared with when it's ill or injured.

To know how to calm a cat or a kitten down, it is important to first of all know the signs associated with stress for your pet.

An anxious cat is more susceptible to infectious diseases than a cat which isn't stressed. Chronic stress can end up making your cat aggressive.

For your cat's well-being as well as your own, learning how to prevent or treat their stress is essential.

How do I know if my cat is stressed ?

Just like when your cat is in pain, the main sign that your cat is stressed is a change in behaviour. If your cat is normally sociable and playful, it is quite easy to see if something isn't quite right.

However, for more independent, less sociable cats, it can be difficult to distinguish between stress and their normal behaviour.

Here are the nine signs that should alert you if your cat is stressed:

If you notice your cat displaying these signs, it's possible they could be suffering from stress. Be wary though as these signs could also signal other underlying health problems.

To make sure your cat is simply stressed and not ill, it is important to pay a visit to your local vet who will be able to distinguish between the two for you. They will then tell you how to relieve your cat or kitten from stress.

Why is my cat stressed ?

There are many reasons as to why your cat could be stressed. Firstly, they could be genetically predisposed to stress, something which is impossible to foresee.

Secondly, they could be feeling overwhelmed about their environment which could make them nervous. Even if your cat is generally independent, they will still like to have their routine and habits. A sudden change in their daily routine could leave them feeling anxious.

The arrival of a child or another animal in the family, in particular another cat with which they must now share their territory among other things with, can also upset them. 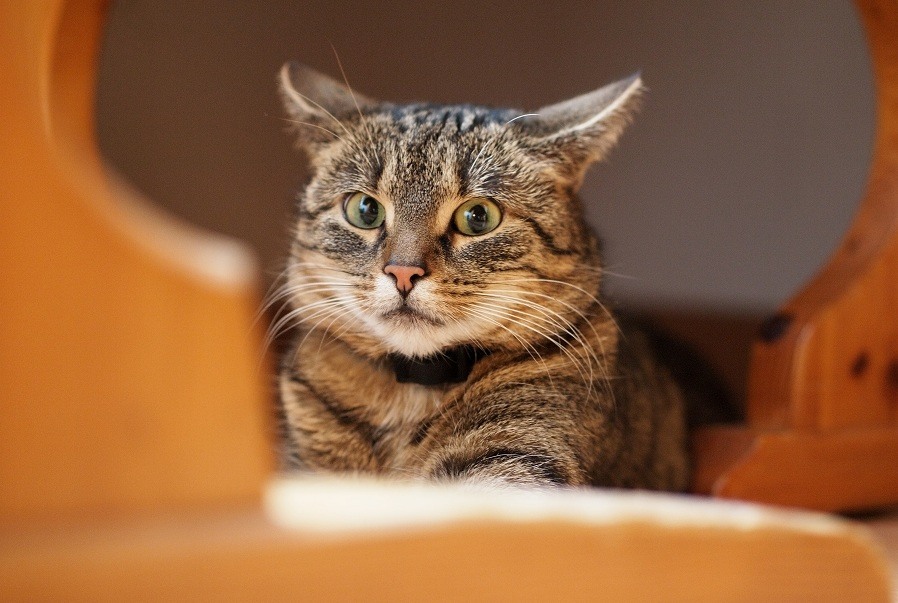 What are the consequences of stress for my cat ?

As has been said, a stressed cat is a cat with weaker immune defences. They are therefore more susceptible to infectious and auto-immune diseases, making them ill more often than normal.

Just like with humans, chronic stress can also lead to skin and breathing problems. A stressed cat can suffer from asthma, eczema, or psoriasis. It can also lead to alopecia whereupon they lose all their hair that doesn't always grow back in some places.

Finally, your cat's bladder can also be affected by stress. A stressed cat will urinate more than normal and often outside its litter. This could lead to urinary infections such as interstitial cystitis.

All these disruptions in a cat's health can reinforce stress. It is therefore important to be able act before their health is affected.

How do you relieve a stressed cat or kitten ?

It's not always easy to know how to relieve your cat or kitten that turns out to be stressed. Once your vet has confirmed that it is in fact stress and not an underlying health problem, then it's up to you to identify the possible causes of the stress.

Sometimes the cause of the stress is obvious, such as a change of home or a new arrival in the family. However, sometimes it can be much harder to find out. It could be down to boredom or perhaps a change in their food which they don't agree with, even if they've accepted many dietary changes beforehand.

Once the origin of the stress has been identified, you can put measures in place to cancel out the cause, or perhaps get treatment from your vet. It could also be worth considering getting dietary supplements or calming pheromones. In worst case scenarios, medical treatment could also be considered.

To reassure a stressed cat, it is important to give them attention. You could, for example, play for longer with them, make new places of rest available (a cat tree for example), adapt their diet…

Most importantly, try not to lose your temper with them if they make a mistake linked to stress. This could exacerbate the situation.

How do you calm down an aggressive cat ?

If, despite everything, your cat becomes aggressive, then here is what to do. An aggravated cat or kitten is generally behaving that way because they don't know how to react.

They may start to spit, scratch or bite. If they seem aggressive, it is important to make sure you don't aggravate them further and give them a chance to calm down. You will need to stay out of their way, even if this means leaving the room where they're in.

If you are close to them when they show signs of aggressiveness (arched back and hair on end), then avoid making eye contact with them, as they interpret this as a sign of aggression on your behalf. Turn away your gaze as if nothing is happening.

Don't try to trap them or make a move. This could make them even more aggressive.

To avoid an irritated cat becoming aggressive, make sure they do plenty of exercise, have plenty of places to get away, and most importantly, don't retaliate them. They won't understand and could become more aggressive.