A cat's skeleton is made up of many different bones: 250 altogether. This number may vary, as some cats have longer tails than others, and therefore more vertebrae.

The skeleton holds the cat's body together and allows it to move around. Bones are hard and mineralised due to their high calcium content, which is very important for metabolism.

The skeleton is a means of attaching the muscles and ligaments together, while the bone marrow contained inside it allows the production and distribution of blood cells.

Just like people, cats are susceptible to fractures and deformities. It's very important to look out for your cat's health so that you can prevent problems before they arise.

In this article, we'll explain the structure of your cat's skeleton and how it works. The skeleton will be presented in two parts: the axial part and the appendicular part. We will also cover certain bone diseases than your cat may be affected by at some point in their life.

The axial skeleton is made up of the skull, the mandible (the lower part of the jaw, which is horse-shoe shaped), the lingual bone (this is H-shaped and is used for swallowing), the spinal cord, the ribs (in cats the ribs are not attached to the sternum, just to the spine) and the sternum.

The thorax is composed of the thorcacic part of the spine, to which thirteen pairs of ribs are attached, and the sternum, which has eight bones: the manubrium, six costal notches and the xiphoid.

The skeleton of each thoracic limb (a limb attached to the upper part of the body) has 31 bones: the clavicles and the scapula by the shoulder (omoplate); the humerus is the upper arm bone, while the bones in the forearm are the radius and the ulna. Seven bones form the carpus (the base of the paw):  the scaphoid, the capitate, the pisiform, the trapezoid, the trapezium and the hamate. The front of the paw has five metacarpus bones and fourteen phalanges.

The skeleton of each pelvic limb has 29 bones: the coccyx which extends from the hips, the femur which makes up the thigh, the patella (the kneecap) and the fibia and tibula which make up the leg. There are seven tarsal (ankle) bones: the talus, the calcaneus, the navicular, the medial cuneiform, the intermediate cuneiform, the lateral cuneiform and the cuboid. 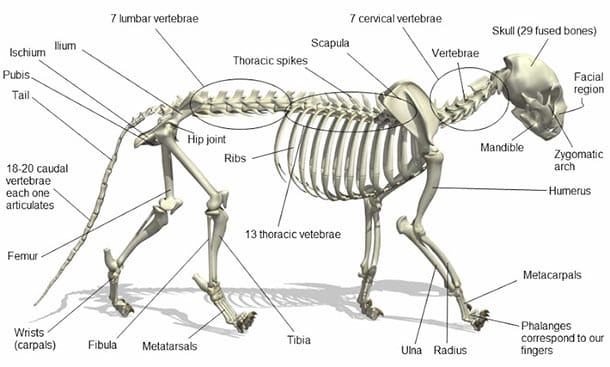 Bone tissue is very resistant to infection. Nonetheless, bones may come into contact with bacteria after any surgery, however minor or major.

Osteomyelitis is one of these illnesses which affects cats. This is when the bones become infected by a germ via the blood circulation.

A bacteriological exam is necessary to diagnose such an infection and to establish the correct method of treatment as quickly as possible.

Treating osteomyelitis is a long and complicated process, so it's very important to prevent these kinds of infections via sanitisation throughout any kind of bone surgery.

Osteogenesis imperfecta, also known as brittle bone disease, is another bone illness. Though this is more common among dogs than cats, some felines suffer too.

It's a hereditary disease which manifests itself in several different ways; dangerous fractures may happen, as well as loss of hearing, defective teeth, hypermobility of the joints and the whites of the eyes turning blue.

Cats can also get osteofibrosis. This illness is caused by a lack of calcium and minerals. It can result in bone malformities and fractures.

If your cat starts to limp or struggle to get up, this may be a sign that they are suffering from osteofibrosis. Deformities caused by this illness can be permanent. An x-ray is needed to diagnose this disease – this is the only way to be certain that your cat has bone deformities.

To prevent this illness, ensure your cat has a rich and varied diet. As carnivores, cats need proteins, carbohydrates and fats, as well as  vitamins, fibres and minerals.

To avoid bone diseases, or to catch them them if your cat is already effected, pay close attention to your pet, and check in with your vet regularly.

Giving your cat a wide range of healthy food also helps to strengthen their immune system and combat deficiencies.