Neutering and sterilisation are very important procedures in your pet's life. Though many pet owners choose not to castrate their cats for various reasons, the procedure can really improve a cat's quality of life.

Why should you neuter your cat?

Feline castration is done primarily in the interest of the animal. A cat which was not been neutered is more likely to run away or get into fights with other cats. They're therefore at risk of getting hurt, developing abscesses or contracting a disease. Some, such as Feline AIDS, can be fatal. Running away or wandering off also puts your animal in danger as they become exposed to accidents this way, particularly in cities.

Neutering your cat will also save you trouble. Castrated cats usually stop leaving urine markings in the house and scratch furniture less.

Finally, castration curbs the number of unwanted kittens that are born each year. These kittens increase the number of stray cats, which end up breeding and subsequently increasing the number of feral cats. By neutering your cat, you avoid adding to the population of cats that end up spending their whole lives in shelters.

In the UK and the US, sterilisation and castraion are not compulsory, despite campaigning from several associations.

When Should I castrate my cat?

As a general rule, castration is done when the animal is six months old, as puberty begins. However you can castrate your cat at any age, once they have reached sexual maturity. 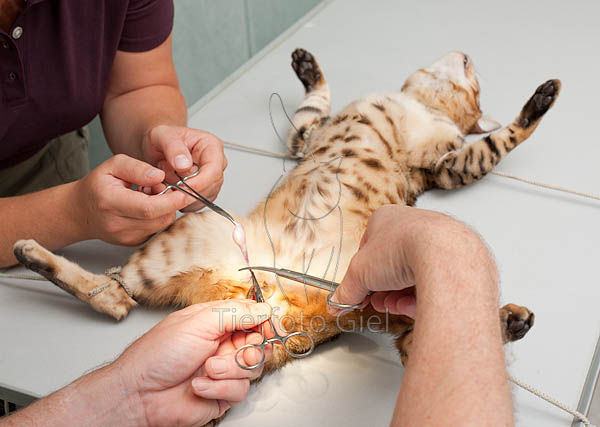 How does castration work?

Castration involves removing the cat's testicles from the scrotum. The cat is under anaesthetic for a short amount of time. The vet sews the incision back up with a few stitches. Castration is even quicker and simpler for female cats.

The night before the operation, your cat shouldn't eat. It's very important to follow this rule to avoid your cat vomiting while under anaesthetic. Any food that is thrown up could get into your cat's lungs.

How long does it take?

Once the surgery is finished, a pain killer is given via injection just after the operation. This should provide pain relief for 24-48 hours. If you notice any bleeding or loss of appetite, don't hesitate to contact your vet.

Don't let your cat out of the house for a day or two after you've brought it back home.

It's very important to adapt your cat's diet after they've been neutered. Neutered cats are more prone to obesity, because their energy needs are higher than cats that haven't been neutered. Your vet will be able to recommend you "light" petfood, which will reduce the risk of your cat becoming overweight.

How much does it cost?

In the US, neutering a cat can cost $50-100, though some assocations such as ASAP offer the operation at a reduced price.

Vets will be happy to give you a quote before the operation takes place. It's worth bearing in mind that neutering a female cat is often slightly more expensive.