The Turkish Van, nicknamed the "swimming cat" for its love of water, is as its name suggests from Turkey.

They are highly active, energetic cats who love to jump to the highest point in the room and play with anything they can get their paws on. Turkish Vans are also very affectionate and dote on their humans but only on their own terms.

Fun fact: Many Turkish Vans have a small mark between their shoulder blades called "the thumbprint of God" which is thought to be good luck!

History of the Turkish Van

Westerners first discovered the Van in the mid-1950s by photographers Laura Lushington and Sonia Halliday. They were given a pair of kittens during their trip and were amazed to see them take to ponds or streams for a swim any time they stopped for a rest.

When they took the cats back to England with them, there was interest in the breed, but the cats were rare even in Turkey. Fortunately, breeders have taken care to preserve them. In Turkey, they are considered national treasures.

The breed was not introduced to the United States until 1982, although The International Cat Association (TICA) recognized them in 1979. They are also recognized by the Cat Fanciers Association and other cat registries.

Turkish Van's are medium sized cats with a strong, sturdy and long torso. They have a full chest and substantial musculature with males in particular possessing marked muscular development in the neck and shoulders.

Their legs are medium size with hind legs being slightly longer than forelegs. A Van's feet are neat, round with toes tufted. The tail is also a medium length plume or a brush and in proportion to the rest of the body.

The Turkish Van's head is large to medium in size, being broader in males than females. The eyes are large, walnut to peach pit shape, set slightly oblique. They come in amber, blue or odd eyed colors. Eyes should be clear alert, and expressive.

Their ears are moderately large to large, set fairly high and well apart. They are wider at the base with slightly rounded tips. The insides should be well feathered. The muzzle is neat, rounded and proportionate to the head. 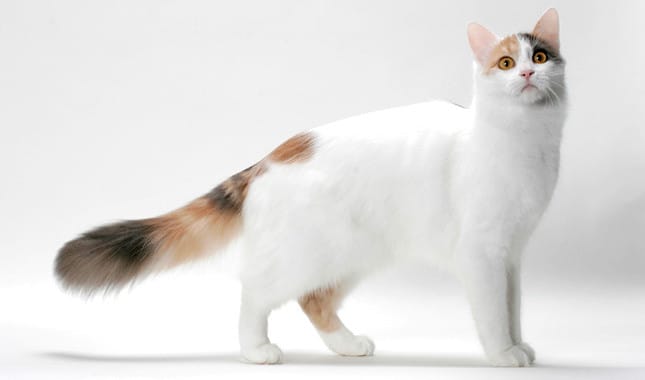 The mountainous and rugged landscape and cold climate of the region where they are thought to have originated no doubt contributed to the development of the Van’s cashmere-like coat.
The Turkish Van's coat is semi-long with no wooly undercoat. They have both a summer and winter coat with the latter being much fuller, longer and softer.

Contrary to what you may at first think, the Turkish Van is in fact a colored cat with large patches of white as opposed to a white cat with colored patches.

They have colored markings on the head and the tail and may also have random spots of color on the body and legs. This type of coloring is known as the "Van" pattern.

Colors seen in the breed include red, cream, black, blue, tabby in red, cream, brown and blue, and various shades of tortoiseshell.

The Turkish Van is a social and affectionate cat who is strongly attached to his family, although he may choose certain members as his favorites. They dislike being held and restrained but will happily cuddle next to you and sleep in your bed.

They are a highly active and athletic breed but this doesn't necessarily mean they're graceful, not always landing on their feet. Van's are also highly intelligent and love learning new tricks Just like their canine counterparts, they love playing fetch.

They are renown for their wicked sense of humor and may enjoy pushing items off a shelf just out of curiosity or perhaps clumsiness.

Also known as the "swimming cat", Turkish Vans absolutely love water and will seize any and every opportunity to be in it. This can often lead them into trouble so be sure to put down toilet seats and cover swimming pools. It’s not unusual for a Van to simply enjoy lying in water, especially during hot weather.

They get along well with other cats and dogs as long as they realize they're the ones in charge. With his sturdy body, he can also be a good choice for families with children as long as they are supervised and don’t try to pull his fur or tail.

The breed is fairly robust and so far has not been proven to be predipsosed to any genetic illnessses. However, just like humans, all cats have the potential to inherit a particular disease.

There have been reports of some developing a form of heart disease called hypertrophic cardiomyopathy but there is no substantial proof that this is inherited.

The Turkish Van has a single coat with a silky texture. Because there’s no undercoat to cause mats or tangles, it’s easy to groom with weekly combing or brushing with a slicker brush. Due to their coat, being water-resistant, baths are rarely necessary.
Brush the teeth to prevent gum disease. Daily dental hygiene is best, but weekly brushing is better than nothing. Trim the nails every couple of weeks.