Tonkinese, nicknamed 'Tonk" are a domestic cat breed produced by crossbreeding the Siamese and the Burmese. They share many of their parents' distinct personality traits and are similarly distinguished by a pointed coat pattern in a variety of colors.

They are a highly intelligent, playful breed and are great around dogs and other cats, making them great family cats. The Tonkinese cat is renown for its extremely affectionate nature, often demanding attention.

History of the Tonkinese cat

Tonkinese cats have an interesting history. The breed was created by crossing Siamese and Burmese cats in an attempt to produce a cat with a moderate body type and a less piercing voice than the Siamese but with the loving nature and intelligence shared by both breeds.

Its ancestors originated from Thailand and first came to England as breeds with solid brown coats. These cats would later go on to become the Burmese, chocolate point Siamese, Havana Browns and Tonkinese breeds. During the late 19th and early 20th century, the Siamese and solid coloured cats were exhibited throughout Europe.

In the 1960's, when Canadian breeder Margaret Conroy, crossed a sable Burmese with a seal point Siamese, the offspring were described as golden, possessing characteristics from both breeds. Breeders of the cats began achieving a consistent head and body style, and changed the breed name to Tonkinese.

The Tonkinese cat is medium in size, solid, and very muscular. They are considered an intermediate type between the more "cobby" Burmese and the slender, longer bodied Siamese.

Their musculature often makes their weight deceiving and are much heavier than expected when picked up. They can weigh up to 12 pounds or more.

The Tonkinese's legs are slim but in proportion to their body. They have distinctive oval paws and their muzzle is gently rounded, slightly wedged and blunt. Their eyes are almond in shape and can be aqua, blue, green or yellow-green depending on coat colour.

The tail is slender but in proportion to the length of their body, tapering towards the end. A Tonkinese cat's ears are medium size, broad at the base with oval tips and set towards the outside of their head. 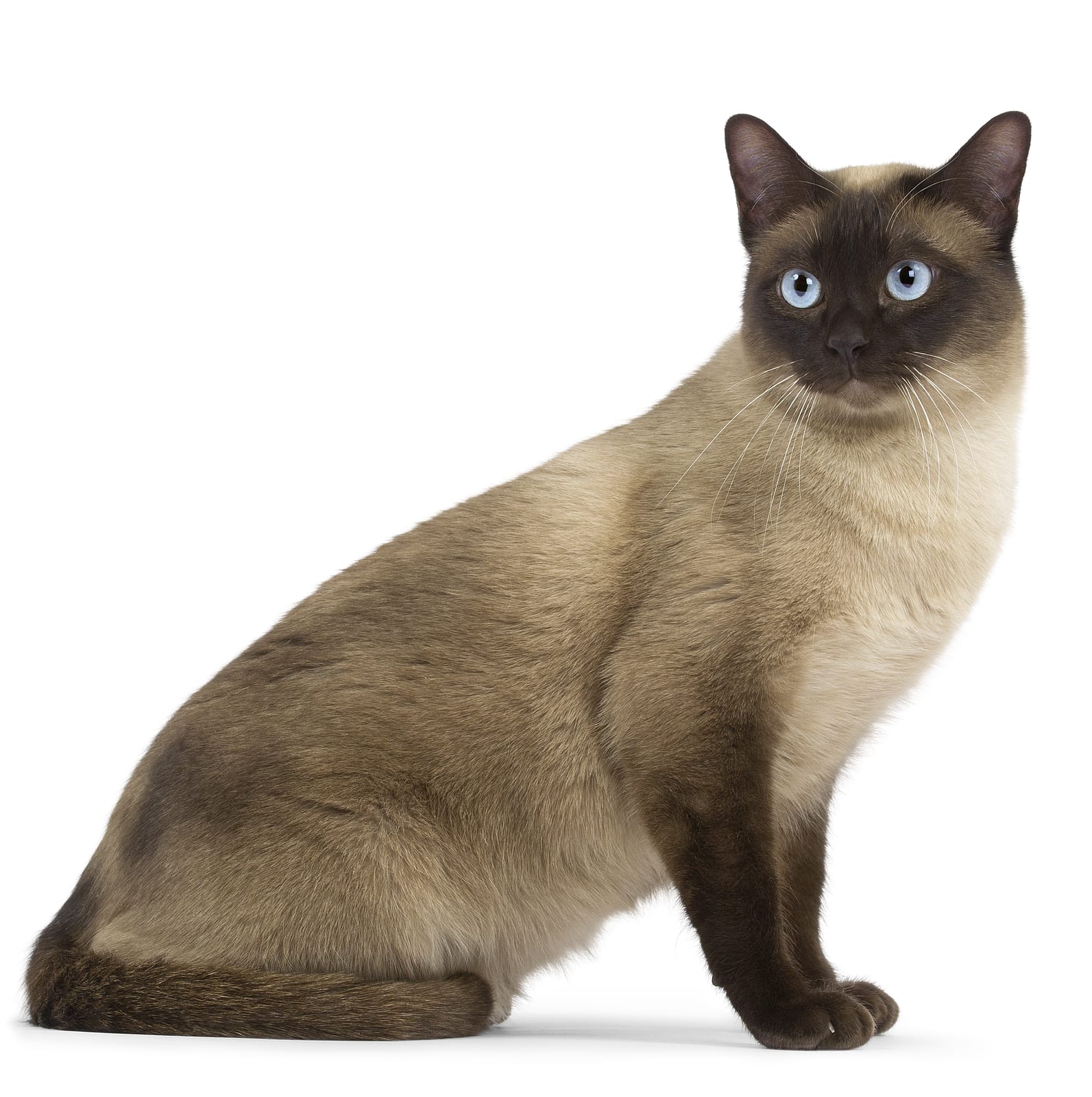 The Tonkinese has a short coat, of medium thickness which feels soft and silky. It comes in “mink,” solid, and pointed shades in natural, champagne, blue and platinum, for a total of 12 different colorways.

Mink Tonkinese have a body color that is rich, even and unmarked, shading almost imperceptibly to a slightly lighter shade on the underparts, with a distinct contrast between body color and points.

Just like it is a physical combination of both the Burmese and the Siamese, the Tonkinese is also a temperamental one. They are an active, friendly and loving breed and go against the aloof and independent cat stereotype, absolutely adoring attention and often demanding it.

They make very amusing companions, loving to entertain family and guests. Alternatively, they are also renown for being lap cats and are just as happy sitting contentedly, cuddling with their humans.

The Tonkinese cat is a highly intelligent breed and loves puzzle toys and retrieving thrown objects, just like their canine counterparts. They can be stubborn in their quest to get attention, but their clownish behaviour is so endearing that it doesn't really matter.

Tonkinese's are talkative cats with a similar voice to the Burmese and a softer and sweeter tone than the Siamese.

The Tonkinese is susceptible to a variety of health problems that are genetic in nature. They are generally healthy but can be prone to gingivitis and may be sensitive to anaesthesia. Being descended from the Siamese, they share the same susceptibility to certain diseases. These include:

The Tonkinese has a short coat that is easily cared for by simply brushing it weekly to remove molting hair and distributing skin oil.