The Safari Cat is counted among the rarest breeds of cat, with just 70 registered at the International Cat Association. A mix between Geoffroy's cat and a moggy, the Safari Cat is considered the "Rolls Royce" of exotic cats.

Origins of the Safari Cat

The Safari Cat originates from the US. It's a mix between Geoffroy's Cat and a moggy. Originially, this cat was breed in the 1970s to aid leukaemia research carried out by Washington State University.

The cross-breeding was quickly abandoned by the university, who decided it was too complicated. Subsequently, cat breeders took over the development of the breed. However, due to fertility problems among male Safari cats, the breed was extremely difficult to develop. This is why Safari cats are so rare nowadays.

At first, the breed was called "Criollo", and later on "Appaloosa." The name "Safari" was chosen in reference to the exotic nature of the cat.

The Safari cat has a stunning appearance, due to the cross-breeding carried out with its wildcat ancestors. Because they are so rare, there are no breed standards for the Safari cat.

The Safari cat is medium to large-sized. The first few bred weighed around 15 kilos (around 33 pounds), but subsequently they became smaller and smaller. The Safari cat nowadays weighs 11 kilos or so (25 pounds).

Safari cats live on average between 17 and 20 years. 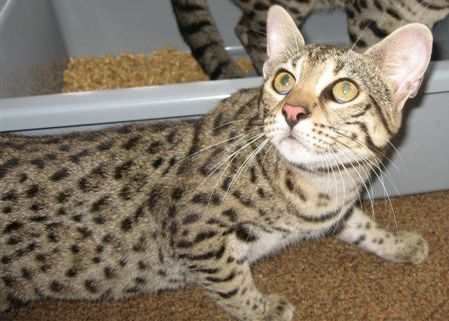 The Safari cat has a short, spotted-tabby coat. Its whole body is covered with black spots, similar to those on a leopard. They can also be colourpoint or tortoishell.

Despite its wildcat origins, the first few generations of Safari cats were described as very easy-going, and this trait has reamined consistent over the years.

They have "calm temperaments" and would make "wonderfully gentle pets", according to breeders.

Like most cats, the Safari cat is very intelligent. They are also known for having strong personalities.

As mentioned earlier, getting the breed to thrive has been no easy task. Male Sarafi cats have fertility problems, like Bengal cats and Savannah cats. The females are fertile and therefore often become breeding cats, while the males are sold as pets.

In the 1970s the cats were used to study stem cells in "big animals". Six cats were used for related tests, and several of them began to suffer from pancytopenia – a decline in the number of white blood cells, red blood cells and platelets in the blood.

However, cats that carried this gene have been "irradicated", and the illness is no longer seen in Safari cats.

As with most moggy cats, a weekly brushing is enough to keep the coat soft and shiny.