A cat with a troubled past, the Russian Blue is a beautiful purebred feline, which would get on well with calm people who enjoy peace and quiet.

The origins of the Russian Blue are controversial and uncertain. Though usually attributed to Russia and Scandinavia, they may also be found in the outskirts of the Mediterranean. Russian Blues also go by several names, most notably the Archangel Cat; a name which reflects the cat's mysterious and almost legendary origins.

The cat is believed to have originated from the port of Arkhangelsk, where Russian Blues were hunted for their warm fur or used on boats to hunt rodents. They probably came to Britain between the 16th and 19th centuries; we don't really know how or precisely when the breed came to expand in this way.

According to one theory, the Russian Blue shares origins with the Chartreux cat, while others link it back to the era of the Vikings, who supposedly introduced the cat to countries throughout Europe.

One thing is certain: the Russian Blue, at that point still known as the Archangel Cat, first appeared outside Russia at a cat show held at Crystal Palace in London. Unfortunately it did not meet with much success, and judges preferred other blue cats such as the Chartreux or the British Shorthair. Nonetheless, the cat crossed the Atlantic and began to spread across the US and Canada at the end of the 19th Century.

The Russian Blue cat almost fell victim to history; strong anti-Bolshevik feeling seized hold of Europe at the time of the Russian revolution in October 1917, and a rejection of Russia and all things Russian quickly spread throughout the Continent. Despite everything, the Russian Blue appeared in France in 1925, under the name of the Maltese Cat. In 1939, the name Russian Blue stuck for good.

During the Second World War, history made its impact felt once again; and like many other breeds, the Russian Blue narrowly escaped extinction. The breed was ultimately saved thanks to the determined work of British and Scandinavian breeders, and spread throughout the world, most especially in Anglo-Saxon countries.  It was finally recognised as a breed in its own right in 1984.

Nowadays there are two kinds of Russian Blues: the American and the British, each one being the result of different cross-breeding on the two sides of the Atlantic. In this way, throughout the 70s and 80s several long-haired varieties of Russian Blues came into existence, including the Nebelung, which has mid-to-long fur.

The Russian Blue is now a very popular cat, admired for its beauty and gentle nature.

A medium-sized cat, the Russian Blue as an adult or as a kitten is a robust cat with a slender and elegant body supported by dainty paws; its feet are small and round. The Russian Blue is fine-boned, but muscular, which lends it its characteristic grace.

The cat or kitten has a large head and a seven-sided face. Its muzzle is short and solid, as much as its chin is strong. The corners of the mouth are slightly raised. The Russian Blue's eyes are always green and almond or walnut-shaped. The ears are large and widely-spaced. The cat is of average length, and its tail is slim to the point of extremity, but still remains proportionate to the rest of his body.

The Russian Blue as a cat or a kitten has small differences according to whether it is of the American or British variety. The American version is slightly  lighter and has a rounder head, a smaller body and shorter fur than its British counterpart. 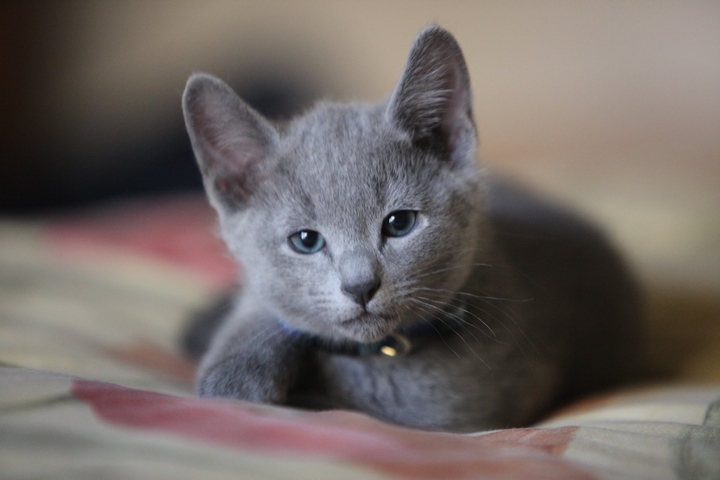 The colour of the Russian Blue is, as suggested by its name, a very unique blue-grey, and if reflective on the cats extremities due to its transparence. This gives the cats fur a shiny appearance.

This cat has a particularly timid nature, but is also intelligent and calm. Naturally discreet, the Russian Blue rarely makes itself heard, but its miaow is sweet and melodious. It is a cat which enjoys peace and quiet, and the hustle and bustle of children tends to displease it.

Despite everything, the Russian Blue loves to play and shows itself to be an excellent hunter. When it leaps and bounds, it doesn't hesitate to land on its "prey". It also enjoys the company of other animals.

This cat can sometimes be wary of strangers, and much prefers the company of its owner, with whom it can spend its days without feeling shy.

The  Russian Blue at any age needs no special care in particular. It is a robust and tough cat, which will enjoy life in an apartment just as much as in a garden. However, they have a large appetite, and it is necessary to make sure te cat doesn't gain too much weight.

Russian Blues have a life expectancy of between 15 and 20 years. They aren't at risk from any genetic illness in particular, as is the case with many other breeds.

With regard to brushing, the Russian Blue needs to have its coat combed weekly. The occasional bath is also recommended. This cat's upkeep is particularly easy and will suit someone who doesn't want to spend hours doing it.