The Pixie-Bob cat is a breed of domestic cat. This unusual cat may look wild but his behaviour is mild. He is unique among cat breeds because his breed standard permits polydactylism, meaning he can have more than the usual number of toes.

They are big, lively and outgoing, often described as dog-like due to their devotion to their humans. They make great family cats, being playful but by no means hyperactive.

History of the Pixie-Bob cat

In 1985, Carol Ann Brewer bought a polydactyl cat near Mount Baker, Washington, in the Cascade Mountains. This male had a short bobbed tail. In 1986, she rescued another male cat who was very large, also had a bobbed tail and was reportedly sired by a bobcat.
Shortly after acquiring this large male, it mated with a brown spotted female from the neighbouring house. Later that year, a litter was born from this mating.
Brewer decided to keep one of the kittens, naming it "Pixie", and a year later she started a breeding program with Pixie as the foundation cat. While there is no hard proof that Pixie’s father was actually a wildcat, it is widely believed and accepted by breeders.

The Pixie-Bob cat is medium to large in size with prominent shoulder blades, a deep flank and broad chest. Their legs are long with the hind legs being slightly longer. The feet are large, long, wide and almost round. They have heavy boning and a muscular build.

The Pixie-Bob's tail, one of its most distinguishing features, must be 2 inches minimum with kinks and curls acceptable. Their muzzle is full and broad with gently rounded whisker pads. The nose is wide and slightly convex with a slight bump.

The head is medium to large and the ears are medium height, wide, with a deep base. They have a rounded top with lynx tipping being desirable. The Pixie-Bob cat's eyes are medium sized and either gold or brown or Gooseberry Green.

Female Pixie-Bob's tend to weigh in between 8-12 pounds, whereas the males can weigh up to 25 pounds. 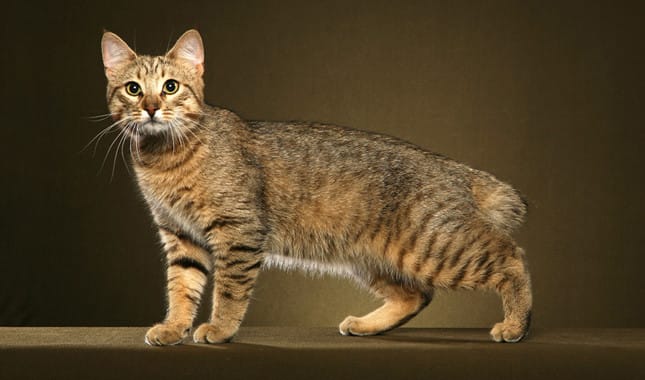 The Pixie-Bob's coat can either be long or short in length with hair tending to be longer around the belly area. It is very soft, wooly and thick.

The Pixie-Bob cat or kitten's coat typically comes in a mackerel or striped coat pattern. Sometimes these stripes are accompanied by rosettes, giving the Pixie-Bob that authentic bobcat look. A Pixie-Bob’s coat can be a variety of colors, but are mostly tawny, light gray, or reddish in appearance.

Pixie-Bobs are an intelligent breed who are often described as dog-like because they are so devoted to their people. They like kids and are sturdy and active enough to be good playmates. Just make sure children treat them with the gentle respect they deserve.

It’s not unusual to see them playing fetch or learning to walk on leash. They tend to get along well with other cats and cat-friendly dogs.

Generally speaking, Pixie-Bobs are a relatively healthy breed that are not susceptible to any particular illnesses. However, there are still a few health issues that can arise with a Pixie-Bob cat.

A small percentage of Pixie-Bobs have difficulty delivering litters and may suffer health consequences. These Pixie-Bobs are taken out of breeding in hopes of reducing this issue.

As mentioned earlier, Pixie-Bob cats are polydactyl, meaning they have more than the usual number of digits on their paws. Fun fact: This is considered lucky, so if you have a Pixie-Bob, luck may be on your side!

The Pixie-Bob's thick double coat needs to be brushed regularly in order to avoid matting and excessive shedding . Once a week should suffice.

Make sure to regularly clean their ears with a cotton ball dampened with a gentle ear cleanser and brush their teeth frequently to avoid gum disease.