The Khao Manee is a breed originally from Thailand. They are known for their short hair and white fur. Very close to the Siamese in personality, they are the perfect example of a "cat-dog".

History of the Khao Manee

The Khao Manee cat or kitten finds their roots in Thailand. Originally called the "Khaao Plort", meaning "all white", their current name means "white gem". They were renamed due to their "particolored" eyes, that is to say eyes of different colours.

The first writings dating their appearance date back to the fourteenth century, in the book of poems of cats, the Tamra Maew.

Considered a lucky breed in their native country, they were also the favorite cat of Siam Chulalongkorn King Rama V, who ruled Thailand from 1868 to 1910. Legend has it that at the time, during the arrival of the English and French, the king hid all the Khao Manee from the palace for fear that they would be stolen. He then offered Siamese to foreigners by presenting them as the royal race, in order to protect the true royal race: the Khao Manee.

They are an extremely rare breed, and until 1999, no specimen had left the country. That year, Colleen Freymuth, an American specializing in the conservation of endangered species, acquired a Khao Manee cat and developed a breed conservation program. She started a breeding with the twelve specimens she had imported and began to spread the breed.

Later, Frédéric Goedert, a French breeder, took over the breeding business. For a long time, he was the only breeder of Khao Manee in the West.

The Khao Manee cat has a fine and slender silhouette, characteristic of oriental cats. They are elegant and graceful.

Their bone structure is quite thin and their front legs are slightly shorter than their hind legs. Their back and sides are rather curved.

Their head is also thin and triangular in shape, with rather rounded lines and prominent cheekbones. Their nose, seen in profile, is slightly broken, which gives it a leonine profile. Their ears are of of average size and very open, especially in females.

Their muzzle, just like their pads, is pink in color. Khao Manee kittens are born completely pink, and become white only later.

Generally speaking, they are a very graceful cat which is reminiscent of the standards of royalty.

But what makes the Khao Manee cat so special, and what the breed standards focus on most, are their eyes. In the shape of a gem, their eyes look like jewels set in marble. Their colour varies from very light blue to sapphire blue, via emerald green, peridot green or sapphire yellow.

In addition to these common colours, their eyes have the particularity of being able to be vairons, i.e. of two different colours. The Khao Manee is known for their bewitching, almost hypnotic look.

Their fur is ermine white and their hairs are short and fine. Extremely silky, they are also very dense. According to some writings, their coat is very charged in static electricity and could even become phosphorescent under a full moon night.

Sexual dimorphism is very important in the Khao Manee. 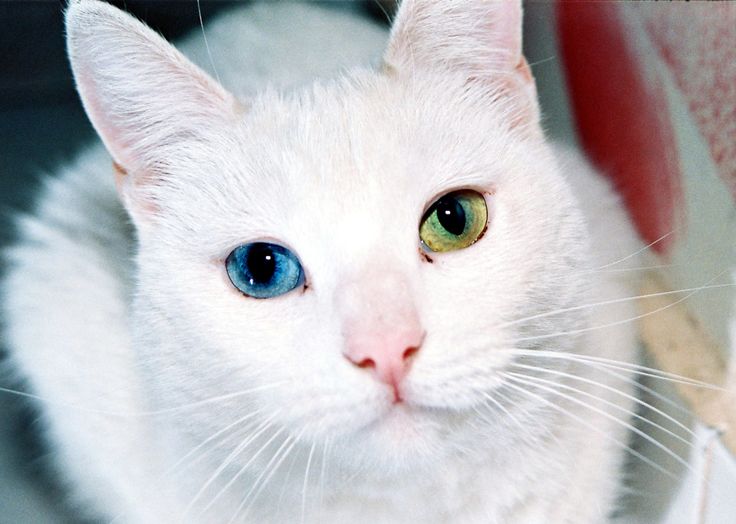 Even if the breed standards have only just been written, the main characteristic of the cat Khao Manee, after their eyes, are their ermine white coat. Almost all cats of the breed have the same white coat. Black subjects have already been found, but they are not recognized by breed criteria.

The Khao Manee cat or kitten is extremely gentle and kind. Sometimes shy, they are nevertheless extremely devoted to their master, for whom they have unlimited love.

Even if they adapt perfectly to the presence of other animals in the home, they are rather solitary, only having eyes for their master.

They like living in apartments and being the subject of all discussions.

Very lively and agile, the Khao Manee loves to play and hunt.

But the main characteristic of this cat is their meowing. Known to be very talkative, the sound they emit when they meow is often quite surprising.

Note that they take time to adapt to a new environment.

There is a clear link between white cats and deafness. However, despite their ermine coat, the Khao Manee was spared this pathological condition. It would seem that the age of the breed, as well as rigorous breeding methods have allowed this cat to be resistant and escape the genetic diseases that are often seen in other breeds of cats.

The Khao Manee has a life expectancy of about 14 years.

The cat Khao Manee is extremely tidy. They will therefore need grooming regularly. It is also advisable to wipe them over with a damp glove from time to time, as well as combing them once a week.