The Javanese cat – also called the Mandarin cat or Oriental Longhair, is a descendant of the Siamese cat. It's the long-haired version of the oriental short-hair.

They are chatty, playful and very affectionate cats. Their miaow is very distinct from that of other cats and allows them to commmunicate a wide range of emotions or requests to the people surrounding them.

Origins of the Javanese Cat

The Javanese cat has the same origins as the Oriental Shorthair, which is also a descendant of the Siamese cat.

The Siamese and the Oriental Shorthair were imported from Thailand by the British at the end  of the 19th century. These cats were considered sacred in their native country, and the British immediately fell in love with their exotic appearance.

Following the Second World War, breeders were looking to revive or create new cat breeders to rekindle interest among cat fans. The Oriental Shorthair was one of the most fashionable breeds during this period, following cross-breeding with Siamese cats and British Shorthairs, as well as Abyssinians, Russian Blues and moggies.

Throughout the 1970s, the first Orientals arrived in the US. It wasn't until the 1980s that the first cross-breeding between an Oriental Shorthair and a Balinese cat took place.

And so the Oriental Longhair was born, also known as the Javanese or Mandarin cat. This cat has the same physique as an Oriental Shorthair, but with mid-to-long fur.

The breed was officially recognised in the US in the 1990s. Mandarin cats are still rare in Europe.

Much like the races it is descended from, the Javanese cat has a slender silhoutte. This gives it an elegant and refined appearance. Its hips and shoulders are the same size.

The Javanese cat's paws are long and slender, though not enough to unbalance its silhouette. Its feet are small and oval.

The Javanese's tail is in keeping with the rest of its body: long and delicate. The hair on the tail is long, thin and very soft.

The Oriental Longhair's head is triangular; a characteristic which sets Oriental cats apart from other kinds of cats. Its forehead is flat and its profile is very straight.

The Javanese cat's eyes are almond shaped and usually green, though sometimes cats with two differently-coloured eyes may be found. Some Javanese cats with white coats have blue eyes.

This cat's ears are triangular, large and wide. They are set far apart on top of the head. 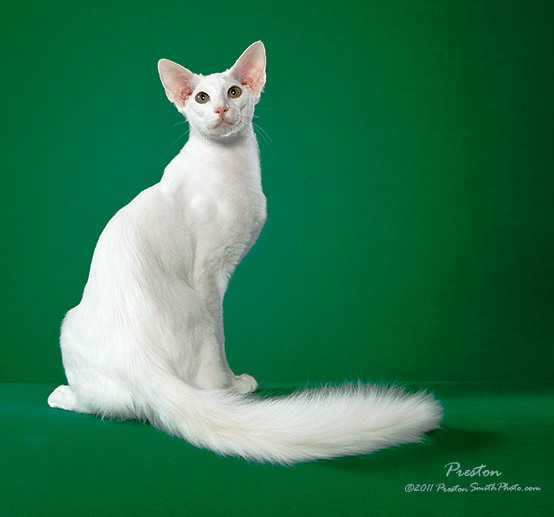 The Mandarin or Javanese cat's fur is mid-to-long. It is very fine and soft. The fur is thickest on the back legs.

The Javanese cat has no undercoat, meaning it's upkeep is easy.

An Oriental Longhair cat may any colour other than colourpoint, like the Balinais cat.

Javanese kittens' coat doesn't fully develop until they are a year old.

The Javanese cat has a similar character to its short-haired cousin.

Javanese cats are very attached to their owners. They have a fairly stubborn temperament, and know how to make themselves heard.

Like the Oriental Shorthair, the Mandarin or Javanese cat miaows in quite an unusual way. They can produce a wider range of sounds than other breeds of cat. This allows them to communicate with their owners, if the owner learns to understand their cat.

All descendants of the Siamese may develop a genetic disease called Amyloidosis. This illness affects the liver and manifests itself as chronic kidney failure which kills all the cats affected by it.

There is currently no cure for the illness. However, there are treatments for the symptoms – diarrhea, dispondency, refusal to eat – but this is only a temporary solution. Most cats affected die within 5 years.

The Javanese cat doesn't need any special care. Its lack of undercoat means that a weekly brushing is all that is necessary.