The Egyptian Mau is a rare breed renown for its exotic appearance, being one of the only naturally spotted breeds of domesticated cat. They are unique in many ways, showing exceptional intelligence and a fierce loyalty to their owners. They tend to be extremely outgoing on their own territory, with an abundance of curiosity and no fear. They are said to make wonderful companions.

History of the Egyptian Mau Cat

The Egyptian Mau, (Mau being the Egyptian word for cat) is notable for being one of the only naturally spotted domesticated cat. In other words, the spotting pattern was not created by human manipulation of feline genes.

Contrary to its name, it still remains unclear whether the modern Egyptian Mau actually originated from Egypt, despite its undeniable resemblance with the spotted felines depicted on the walls of Pharaonic palaces and temples. In fact, DNA analysis suggests that it may have originated from Europe. No one really knows the true origins of the Egyptian Mau, although spotted cats have been sighted in modern-day Egypt.

The Egyptian Mau was bred and exhibited in Europe by cat fanciers until World War II but nearly went extinct after attention towards the breed waned. However, it was saved when Russian princess Natalie Trubetskaya was given one that was said to be from the Middle-East. She immediately fell in love with the breed, bringing it with her when she emigrated to New York City in 1956, along with two other Egyptian Mau's. She used these cats to establish the Fatima Egyptian Mau cattery, which is responsible for producing many of the Mau’s we know today.

Once the breed arrived in America, fanciers wanted to continue the rare breeds bloodline, crossing with other cats, and importing more Mau’s from Egypt and India. It was recognised as a breed in its own right in 1977 by the Cat Fanciers’ Association (CFA), the world’s largest registry of pedigreed cats. According to this registry, it was the 20th most popular breed of cat in America, as of 2014.

The Egyptian Mau is typically very slender and muscular with an average sized body and is thought to be one of the progenitor breeds of the modern domestic cat. They have a slightly rounded wedge-shaped head topped with medium-size ears.

The Mau’s front legs are slightly shorter than their back legs and built for speed. They are said to be the fastest of all domestic cats, reaching speeds of up to 30mph. The Egyptian Mau also has a long skin fold underneath its belly, extending from the flanks to the hind legs, resembling a cheetah. This allows their back legs to stretch further backwards, allowing remarkable freedom and agility.

The Mau has a medium-long tail, which is thick at the base, tapering slightly at the end. All Mau’s must have green eyes, but an amber colour is acceptable in kittens and young cats up to 18 months old. 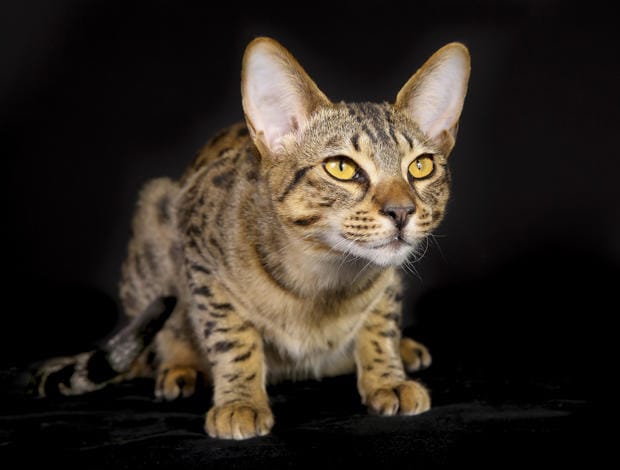 One of the Mau’s most striking characteristics is their spotted coat in either bronze, silver or smoke (pale silver tipped in black). Their coat is medium length and has a silky, fine texture in the smoke coloration and a dense, resilient texture in the silver and bronze colours. The spots on their coat can be small or large, round, oblong, or other shapes.

The Egyptian Mau’s forehead bears an ‘M’ shape or a ‘scarab beetle’ marking. Those with the latter tend to be from America. They also have ‘mascara’ lines that begin at the eyes' outer corners and extend along the cheek and curve upwards towards the ears.  The Egyptian Mau also has dark spots on its pale belly that resemble ‘vest buttons’.

In addition to the aforementioned colours, the Egyptian Mau can also come in solid black, blue silver, blue smoke, blue spotted and solid blue. However, these colours are not permitted in the show ring.

It is said that people are attracted to the Egyptian Mau because of their exotic looks but fall in love with them because of their infectious personality. They are absolutely enchanting and truly one of a kind. The breed is friendly to everyone in the family and people they know but tend to be more cautious around strangers. Extremely curious and outgoing, this cat has no fear while on their own territory, making them wonderful pets. They love playing fetch, learning tricks and interact well with children provided they treat them politely and with respect.

The Mau is a very interactive cat that dotes on their humans, expecting to be an integral part of the family. While they are by no means hyper, they reportedly have some of the fastest reflexes ever seen in a feline. The breed is quite sensitive and likes to have things on their own terms.

The Egyptian Mau is also a skilled hunter and it’s advised that you introduce any pets, even other cats, slowly and in a controlled setting.

Egyptian Maus are on the whole a healthy breed with no problems specifically related to their breed. However, it is advised to ask a breeder about the incidence of health problems in their lines and what testing has been done for any that are genetic in nature.

The Egyptian Mau's coat doesn't need much upkeep with a weekly brush to remove dead hair being enough. As with all breeds, it is advised that you brush the teeth once a week to prevent periodontal disease (gum disease).

It is recommended that an Egyptian Mau is kept as an indoor cat only to prevent it from catching diseases spread by other cats etc. Keeping them inside also protects local wildlife, particularly as they are such avid hunters.