The Chausie is a relatively new breed of cat, brought about thanks to  the hybridization work of american breeders. A cross between a domestic and a wild cat, its imposing size is one of its most distinguishing features.

Very playful, this cat needs a large amount of space to be able to fully embrace its hunting instincts.

History of the Chausie cat

Many cat lovers dream of being able to have a wild cat as a domestic one, notably for their majestic appearance. American breeders also shared this dream but knew that it would be very difficult to capture and discipline a wild cat.

This is how the first crosses between a domestic cat and Chaus (breed of wild cat) were made at the end of the 1960's. The first litters of Chausie cats came from crossbreeding between between Chaus, Abyssinians, Orientals, Bengals or moggy cats with a physical appearance similar to that of wild cats.

These crossings allowed a breed of cats to be created where the appearance resembled that of a wild cat but the temperament was that of a domestic cat.

The foundation of the breed was registered in 1995 in the US. The Chausie became a "new breed" in 2003 in the US. At the moment, France and the USA are the only countries to recognise the breed.

The appearance of the Chausie cat is still being modified as breeders work on trying to get a closer resemblence to Chaus.

The Chausie is a large cat with an imposing and muscular figure. A Chausie cat can weigh between 6 and 12 kilos.

Their legs are of average length and muscular. Its tail is shorter than the majority of most breeds'.

The Chausie's cat is triangular shaped with a rounded muzzle. Their eyes are large, with "lynx tips" (small tufts of hair). 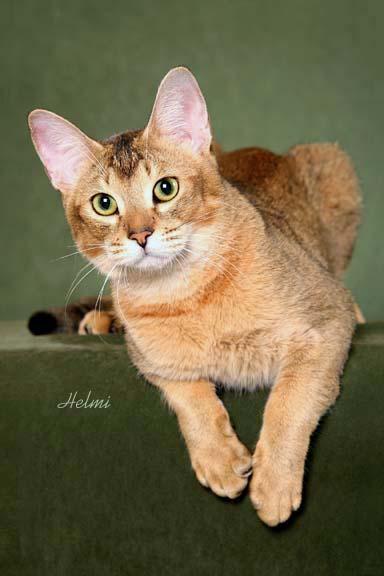 The Chausie has a short and silky coat. The crossing with Abyssinian cats meant that Chausie's also have a "ticking" pattern (two alternating colours on the hair).

Their coat can be black, brown ticked tabby or black silver tipped. The latter only exists with this breed of cat.

As a domestic cat, the Chausie kept its affectionate personality. Particularly developed within this breed is the trait of not being able to stand being alone, enjoying spending time with its master.

As a wild cat, the Chausie kept its playful and hunting temperament. They are cats that love running and need lots of space to blow of steam. It is advisable that if you wish to adopt one of these cats that you have a garden.

The first generation of Chausie's, with crosses between a domestic cat and a wild cat are often very sterile. It is therefore difficult to expand the breed.

As it happens, they are also cats with fragile digestive systems. Lots of Chausie cats are gluten intolerant and cannot eat industrial food.

The short hair of the Chausie does not need any specific upkeep. A regular brush will suffice to maintain its soft hair.